On Friday a Metro Nashville Davidson County Coronavirus Task Force official said that surrounding counties had a higher number of COVID-19 cases than Davidson County itself had — but it appears that claim is highly misleading.

“We now have 2,832 confirmed cases. That’s an increase of 163 cases in the last 24 hours. There are an additional 3,227 cases in the surrounding counties. That’s an increase of 955 in one day. Now, for the first time, the surrounding counties have more cases than Davidson County, ” Metro Coronavirus Task Force Chair Alex Jahangir said at Friday’s press conference with Mayor John Cooper.

The clear implication from that claim was that Davidson County’s continuation of Mayor Cooper’s executive order that residents should remain safer at home and “non-essential” businesses must remain closed was responsible for a lower increase in than coronavirus cases than counties “surrounding” Davidson County, were Gov. Lee has relaxed his executive order to allow many “non-essential” businesses to open up.

On Sunday, a spokesperson for the Metro Nashville Health Department admitted to The Tennessee Star that Jahangir’s claim Friday that there have been 3,227 cases in “surrounding counties,” includes cases in Trousdale County, which does not border Davidson County, and whose 1,344 reported cases of coronavirus reported at the Tennessee Department of Health website as of late Sunday includes more than 1,300 cases of inmates and staff in Trousdale Turner Correctional Facility – almost all of whom are asymptomatic, as The Star reported Sunday. 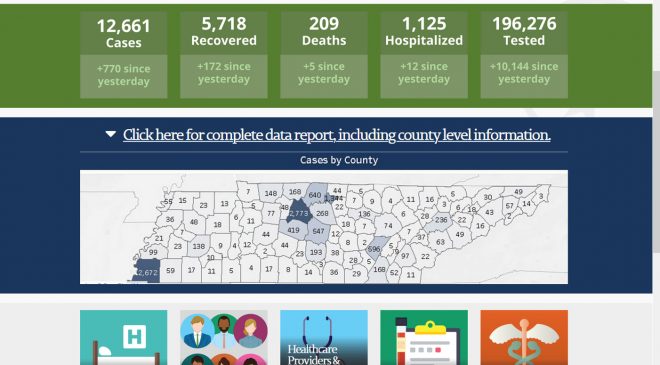 On Sunday The Tennessee Star asked Nashville officials to clarify which counties specifically Jahangir referred to during a press conference Friday. Chris Song, spokesman for Nashville Mayor John Cooper, referred all questions to Brian Todd at the Metro Health Department.

In an email Sunday, The Star asked Todd to cite which counties Jahangir referred to specifically — a county-by-county breakdown. And does that include Trousdale County, where more than 1,000 inmates at the private prison there tested positive for COVID-19?

We also asked Todd how he and other Health Department officials arrived at the 3,227 number.

Todd’s emailed the following response, which did not include a direct answer:

Todd went on to say that, yes, Jahangir did include the cases at the CoreCivic facility in Trousdale County.

Here’s the April 29 coronavirus count, by county, according to the Tennessee Department of Health: 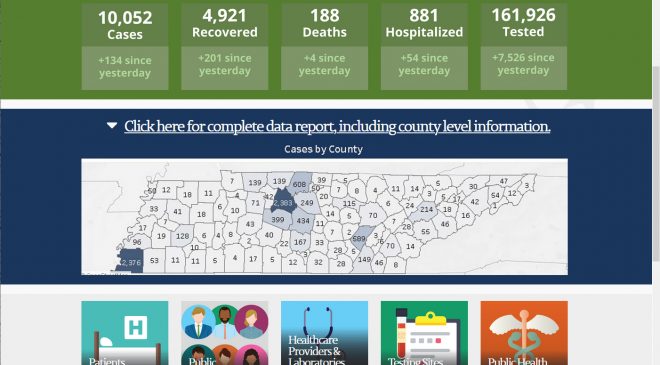 Note that Trousdale county as of April 29 only had 50 cases of Coronavirus.

The following day, April 30, one day before Friday’s press conference, The Tennessee Department of Health reported the following numbers of confirmed COVID-19 cases for the seven counties in the Mid-Cumberland Region:

“Dr. Jahagir was pointing out that a significant number of cases across Tennessee are in the middle of the state. Dr. Jahangir has covered in several daily press briefings that the task force will take several factors into consideration when deciding to move to phase 1,” Todd said.

“Nashville/Davidson County’s trend line of cases is only one of those factors. I have not heard him say that the cases in Mid-Cumberland is one of the factors.”

The current version of the story contains this correction.

We became aware of this error late Monday, when Chris Song, Press Secretary for Mayor John Cooper, provided this comment to The Tennessee Star:

Anything more than a cursory examination of the Tennessee Department of Health website would have shown you that the Mid-Cumberland region contains 12 counties, not seven, as you’ve erroneously informed your readers: https://www.tn.gov/health/health-program-areas/localdepartments.html

The statement made by Dr. Jahangir on Friday is accurate and is based on data received by the Metro Public Health Department directly from the Tennessee Department of Health.