Medical studies show that excessive stress and anxiety are among the most debilitating and deadly of all health hazards in the world. Beyond their obvious effects like suicide and substance abuse – these mental stressors are strongly related to and may trigger and inflame a host of ailments like high blood pressure, digestive disorders, heart conditions, infectious diseases, cancer, and pregnancy complications.

Based on a broad array of scientific data, Just Facts has computed that the anxiety created by reactions to COVID-19 – such as stay-at-home orders, business shutdowns, media exaggerations, and legitimate concerns about the virus – will destroy at least seven times more years of human life than can possibly be saved by lockdowns to control the spread of the disease. This figure is a bare minimum, and the actual one is likely more than 90 times greater.

This study was reviewed by Joseph P. Damore, Jr., M.D., who concluded: “This research is engaging and thoroughly answers the question about the cure being worse than the disease.” Dr. Damore is a certified diplomate with the American Board of Psychiatry and Neurology, an assistant professor of psychiatry at the Weill Medical College of Cornell University, an assistant attending psychiatrist at New York Presbyterian Hospital, and an adjunct professor in the Department of Behavioral Sciences and Leadership at the U.S. Military Academy.

Scientific surveys of U.S. residents have found that the mental health of about one-third to one-half of all adults has been substantially compromised by reactions to the COVID-19 pandemic. Examples include the following:

Contributors to these mental health impacts include but are not limited to:

Among all of the figures above, the lowest nationwide measure of people who have incurred psychological harm from reactions to COVID-19 is the 19% of adults in the late-March Kaiser Family Foundation survey who reported a “major impact” on their mental health. This survey included 1,226 respondents and has a margin of sampling error for this result of ± 2.2 percentage points with 95% confidence.

The Deadliness of Anxiety and Stress

Medical journals are rich with studies that attempt to measure the lethality of stress, anxiety, depression, and other psychological conditions. Determining this is very difficult because association does not prove causation, and unmeasured factors could be at play.

For example, a 2011 meta-analysis in the journal Social Science & Medicine about mortality, “psychosocial stress,” and job losses finds that “unemployment is associated with a substantially increased risk of death among broad segments of the population,” but there are conflicting theories as to why this is so. One is that “unemployment causes adverse changes in health behaviors, which in turn lead to deterioration of health.” Put simply, unemployment causes bad health. The other theory is that bad health causes unemployment. Both of these theories may be true, and factors that are not measured in the studies could be causing both unemployment and bad health. Thus, it is very difficult to isolate these variables and determine which is causing the others and to what degree.

While trying to address such uncertainty, the meta-analysis examined “235 mortality risk estimates from 42 studies” and found that “unemployment is associated with a 63% higher risk of mortality in studies controlling for covariates.”

Regardless of whether job losses from COVID-19 lockdowns are brief or sustained, the study found that the death correlation “is significant in both the short and long term,” lending “some support to the hypothesis and previous findings that both the stress and the negative lifestyle effects associated with the onset of unemployment tend to persist even after a person has regained a job.”

Also of relevance to current job losses, the study indicates that added unemployment benefits, like those recently passed into federal law, are unlikely to mitigate the deadliness of job losses. This is because the meta-analysis found that the associations between unemployment and death in Scandinavia and the U.S. are not significantly different, even though the Scandinavian nations offer more generous welfare benefits. Thus, the authors conclude that “these national-level policy differences may not have much of an effect on the rate of mortality following unemployment.”

A broad range of other studies have similar implications for anxiety-related deaths wrought by reactions to COVID-19:

Among all of the results above, the smallest risk of increased death is 20% in the 2012 meta-analysis. This has a margin of error from 13% to 27% with 95% confidence. The lower limit of 13% translates to an average of about 1.3 years of lost life per person.

Corroborating that figure, 22 of the studies in the 2015 meta-analysis included estimates for the average years of life lost by each person with a mental disorder. These “ranged from 1.4 to 32 years, with a median of 10.1 years.” None of these studies were for anxiety, but the low-end figure of 1.4 years provides additional evidence that those who suffer serious mental repercussions from responses to COVID-19 will lose an average of more than a year of life.

Therefore, the figure of 1.3 years of lost life is a bare minimum and forms the second key basis of this study. This varies widely by person and could be:

In the science of epidemiology, or the study of human disease, ethical and practical constraints often make it impossible to conduct experiments that can definitively establish the effects of medical interventions. This applies to determining how many lives might be saved by government lockdowns during the COVID-19 pandemic.

One can easily compare COVID-19 death rates – or the number of people who die from the disease divided by the total population where they live – in nations and states that took different actions. However, many other factors can affect these death rates, such as wealth, age, population density, government, hospital protocols, culture, genetics, diet, and exercise. For example, New York State enacted one of the strictest lockdowns in the U.S. but has 22 times the death rate of Florida, which had one of the mildest lockdowns.

Given such considerations, the highest possible figure for lives saved by lockdowns can be estimated by comparing the nations of Scandinavia. This is because these countries are culturally, economically, and genetically similar to one another but have enacted very dissimilar policies to deal with COVID-19. In the words of Paul W. Franks, professor of genetic epidemiology at Lund University in Sweden:

The Swedish approach to COVID-19 could not be more different from its neighbors, placing much of the responsibility for delaying the spread of the virus and protecting the vulnerable in the hands of the public. It’s now April and, albeit with some restrictions, Swedish bars, restaurants and schools remain open. …

This all contrasts the far more assertive physical restrictions imposed in the culturally similar neighboring countries. Across the borders in Denmark, Norway and Finland, schools closed weeks ago and movement has been severely restricted.

Sweden has taken certain measures to slow the spread of COVID-19, like limiting public gatherings to 50 people. However, these can hardly be characterized as “lockdowns,” and Swedish stores, restaurants, schools, beaches, and other public places are open and bustling.

Comparing the current death rates of Scandinavian nations yields a maximum figure for the lives saved by lockdowns because Sweden’s plan involves more deaths in the early stages of the pandemic but less later on. As detailed by Professor Franks, simulations show that the overall death rate is “expected to be similar across countries,” but “unlike its peers, Sweden is likely to take the hit sooner and over a shorter period, with the majority of deaths occurring within weeks, rather than months.” 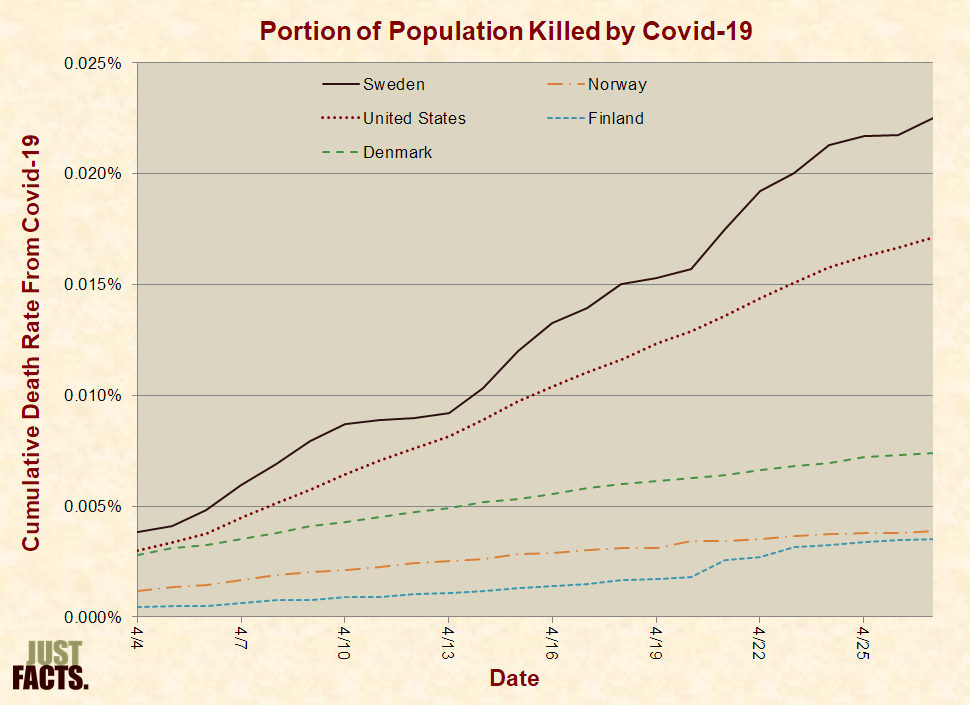 Applying the Sweden/Finland death rate ratio of 6.4 to the United States, the maximum number of Americans who could have been saved by past and current lockdowns is 616,590. This figure is based on the most pessimistic projection of 114,228 deaths in the U.S. through August 4th by the Institute for Health Metrics and Evaluation at the University of Washington. It is calculated by multiplying 114,228 deaths by 6.4 and then subtracting the 114,228 deaths that occur regardless of the lockdown.

The figure of 616,590 lives saved by lockdowns in the U.S. is at the extreme high-end of plausibility because it: 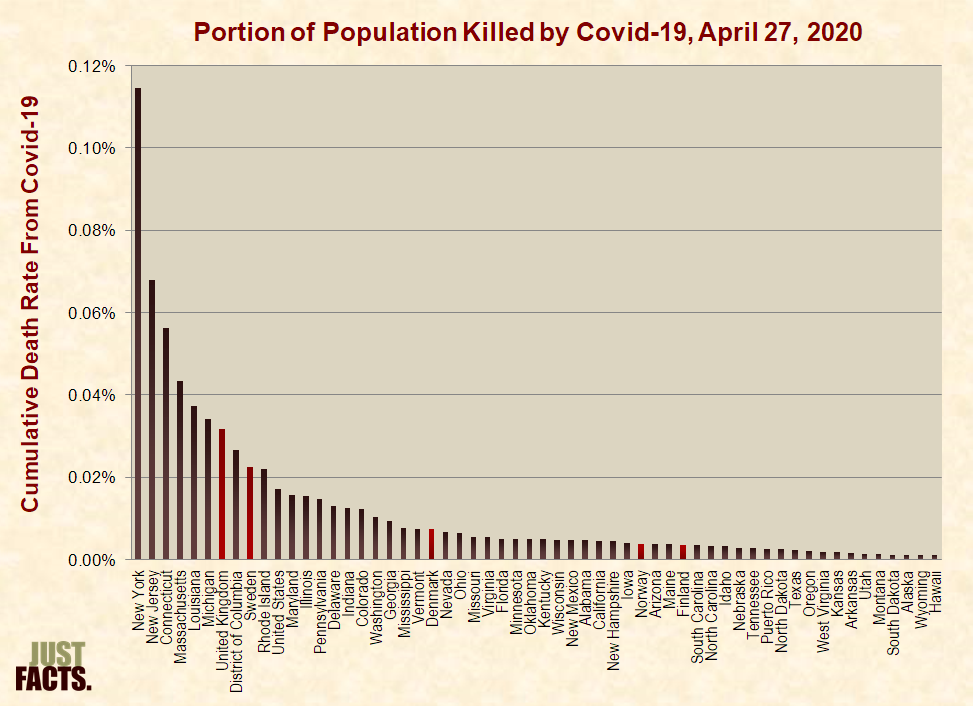 Nonetheless, this study uses the highly improbable and optimistic scenario of 616,590 lives saved by lockdowns. This figure forms the third key basis of the study.

Combining the first two key figures of this study, anxiety from responses to COVID-19 has impacted 42,873,663 adults and will rob them of an average of 1.3 years of life, thus destroying 55.7 million years of life.

In other words, the anxiety from reactions to COVID-19 – such as business shutdowns, stay-at-home orders, media exaggerations, and legitimate concerns about the virus – will extinguish at least seven times more years of life than can possibly be saved by the lockdowns.

Again, all of these figures minimize deaths from anxiety and maximize lives saved by lockdowns. Under the more moderate scenarios documented above, anxiety will destroy more than 90 times the life saved by lockdowns based on:

Even the figure of 90 times is likely a substantial underestimate of the total life destroyed by reactions to COVID-19 because it doesn’t account for:

Unlike analyses that only compare the number of deaths from COVID-19 to other causes, this study accounts for the years of life lost for each victim. This accords with the CDC’s principle that “the allocation of health resources must consider not only the number of deaths by cause but also by age.” Thus, the CDC explains that the “years of potential life lost” has “become a mainstay in the evaluation of the impact of injuries on public health.” This doesn’t mean that the lives of young people are more important than that of the elderly, but it recognizes and accounts for the facts that:

A possible argument against this study is that it isn’t proper to compare anxiety to COVID-19 because the effects of anxiety often don’t kill until the distant future, while the deaths from COVID-19 are happening right now. Such logic relegates the harms of mental distress to years away, but the facts are clear that it can kill immediately, make life a nightmare in the present, and produce current and lasting physical ailments that end in early death. More importantly, tallying the life lost in any random unit of time, as opposed to an entire lifetime, is shortsighted and exclusionary.

Other distinctions, such as whether or not the cause of death is contagious, are similarly myopic. The primary issues are prevention and harm, and the difference between them ultimately determines how much life is saved or destroyed.

A final note for readers who are experiencing anxiety: Healthcare professionals can reduce these effects, so seek help.

Dr. Andrew Glen is a Professor Emeritus of Operations Research from the United States Military Academy. He is a thirty-year U.S. Army veteran and an award-winning researcher in the field of computational probability.