The city of Lakefield, Minnesota will no longer direct any resources to the enforcement of Gov. Tim Walz’s stay-at-home order issued in response to the coronavirus pandemic.

According to the Lakefield Standard, the Lakefield City Council passed a resolution Monday night in a 3-2 vote declaring itself a “Constitutional and business friendly community.”

“The City Council of Lakefield hereby declares its intent to oppose any infringement by Executive Order or any other directive on the rights of law-abiding citizens to keep their businesses open,” states the resolution. “The City Council of Lakefield hereby requests relief from Gov. Walz’s Executive Orders and demands that the sole power of issuing emergency orders and implementation related to the COVID-19 pandemic be restored to individual municipalities and local government agencies.”

The resolution says that city leaders will not direct any “resources to enforce any Executive Order or any other directive which infringes on the right of law-abiding citizens to keep their businesses open as per the Constitution.”

“The City Council of Lakefield will use any legal means to protect the Constitutional rights of the citizens of Lakefield,” it adds.

A local outlet reports that the council initially voted to table the resolution during an April 20 meeting, but passed the resolution Monday after Gov. Walz extended his stay-at-home order for a second time.

“So what the resolution itself says is that we as a city council support our residents, our business leaders in the community, our churches. We support the Constitution and it’s more or less a formal stance saying that we support their right to choose to be open or not,” Lakefield Mayor Brian Rossow told KKOJ.

“That doesn’t necessarily say that we are giving them permission to open because we can’t eliminate the governor’s executive order, we can’t override that, but we have said, with this resolution, that we support their choice in being open or not and we as a city are not going to stand in their way,” he added.

Lakefield is located in southwestern Minnesota in Jackson County, which had 25 confirmed COVID-19 cases as of Tuesday.

The full resolution can be viewed below: 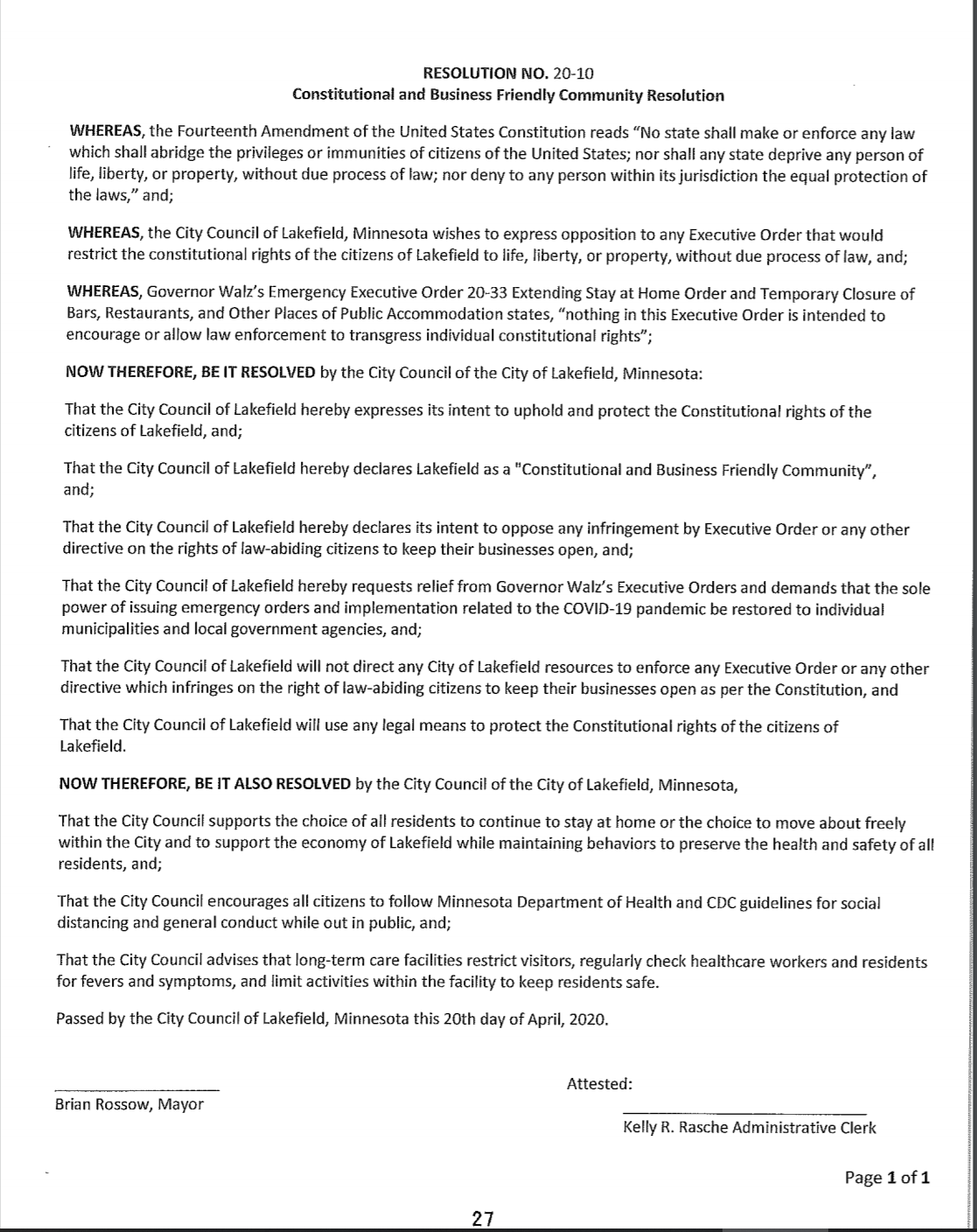