NASHVILLE, Tennessee – A third #FreeTN rally held Sunday included attendees from across Tennessee and out-of-state visitors as well as subject matter experts on the topic of freedom.

The event was held across the street from the Tennessee Department of Health in Nashville, which also happens to be the lawn that sits below the state capitol with a few hundred in attendance.

Counties as far away from Nashville as Carroll, Knox, Maury and Putnam were represented as were neighboring counties of Sumner, Robertson, Rutherford and Williamson. Residents of other states, such as Wyoming and Washington also took time to attend.

Even the highly esteemed Dr. Alan Keyes – a champion of returning the United States to a God-honoring nation who served in the administration of President Ronald Reagan and more recently founding IamTV – made the drive from Sevier County. He told The Tennessee Star that, as he has conducted interviews about the impact of the coronavirus, he wanted to see what the #FreeTN movement was all about.

While Kim Edwards spearheaded the non-partisan, grassroots #FreeTN movement to push for the reopening of Tennessee’s economy by pointing out that everyone is essential, it has evolved into protecting constitutional liberties from government overreach, as The Star reported.

In addition to the expansion in messaging, the latest #FreeTN rally also expanded in its program by including speakers on various aspects of freedom.

After opening with a prayer by Edwards’ husband, Josh, Kate Taylor sang the national anthem. Taylor, who is the founder and an instructor at the Concordia Arts Academy for children and teens that was forced into shut down, made the bold statement that they would be reopening on June 1 and not closing again.

#FreeTN organizer Jennifer Greene of Cookeville is a graduate student in medical clinical health counseling, which has particular relevance in the age of, among other things, the social distancing being mandated during the coronavirus. 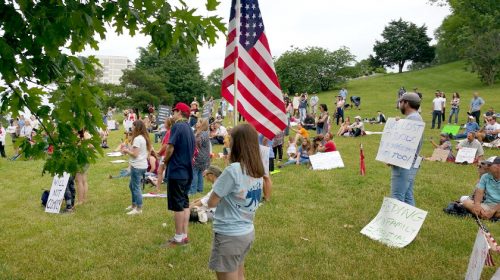 Greene, obviously from a knowing perspective, asked the attendees if anybody had been criticized, bullied, vilified or accused of wanting their grandmother or child to die since speaking out. When the audience responded in the affirmative, Greene revealed that for her the fallout had gone so far that she has been censored by the leaders in her church.

As part of her graduate studies, Greene has learned that there are thousands of peer-reviewed articles on the devastating effects of isolation on physical, mental and emotional health.

While she commended Governor Bill Lee for opening Tennessee at a faster rate than other states, Greene expressed concern about some provisions that remain in place like contact tracing and the more offensive disclosure of the name and address of those who are tested positive to law enforcement.

Greene’s mention of the practice was met with boos from the audience.

Constitutional lawyer and civil rights attorney Robert Barnes, an East Ridge, Tennessee native who has handled such high-profile clients as Alex Jones and the students of Covington Catholic High School, reminded attendees that America’s founding began with a smallpox epidemic which occurred during the years of the Revolutionary War.

Barnes pointed out that when we live in a time period where a virus spreads indoors, but people are stopped from going outside, and are required to stay inside, it could be nothing other than a “power grab.”

He went on to point out numerous inconsistencies in the guidance and policies, calling it “a mass public psychology experiment.”

Barnes relayed a sense of urgency with the current situation, which requires public resistance and protests like the attendees were doing.

“We must restore our rights now,” said Barnes. “Like Tennesseans at the Alamo, if we don’t, freedom may be lost forever.”

Father of eight, husband and physician, Dr. Theron Hutton said he never thought he would have to speak so forcefully about freedom and liberty and not just about health.

Dr. Hutton made the point that decisions seem to come from those who stand to gain the most.

He suggested that health departments should focus on small, local and sustainable food production; do research on the health impacts of what is sprayed on fields and field by the tons every single year; stop worrying about giant research projects that benefit huge drug companies and focus on things that are known to help like vitamins C and D, selenium and zinc; and study the impact of wireless technology on health.

Dr. Hutton said that the health department has lost our trust when they share information about COVID-19 test results with local law enforcement without permission, consent or knowledge, something he was made aware of from a patient until he researched for himself.

Dr. Hutton urged support of the people who “put their necks on the line” at their own potential peril.

Dr. Dale Brown, a bare-footed Clarksville-based chiropractor also known as “The Wild Doc,” was introduced as “a champion for medical freedom.”

Many of the rally attendees were so interested in what Dr. Brown had to say, they recorded his talk with their cell phones as he explained a situation he was involved with when a local government pushed a resolution that would have schools encourage parents to have their children get a flu shot.

During the meeting on the resolution, Dr. Brown testified that the flu vaccine has been around tens of years, yet the incidences of flu and pneumonia have gone up. Additionally, if the resolution passed, Dr. Brown said there would be a greater occurrence of flu-related deaths in children.

Meanwhile, as Dr. Brown describes it, he watched the health department tell lies and not use one bit of research in their presentation.

Dr. Brown telling patients in a health department waiting room about a CDC whistleblower who admitted to lying about vaccines causing autism, earned him a letter from a government attorney banning him from the health department.

Dr. Brown concluded that the collective ignorance and unknowing is played upon, and that at the bare minimum, parents should at least be given the information so they can make their own decisions.

In keeping with the way it started, the rally ended with a prayer, with all dodging the forecasted thunderstorms.