NASHVILLE, Tennessee — Several thousand protestors descended upon Nashville’s Legislative Plaza Saturday on behalf of George Floyd and many carried signs demanding that government either defund or abolish the police.

The crowd, composed of whites and blacks, chanted “Black Lives Matter” and “No Justice, No Peace” many times over. 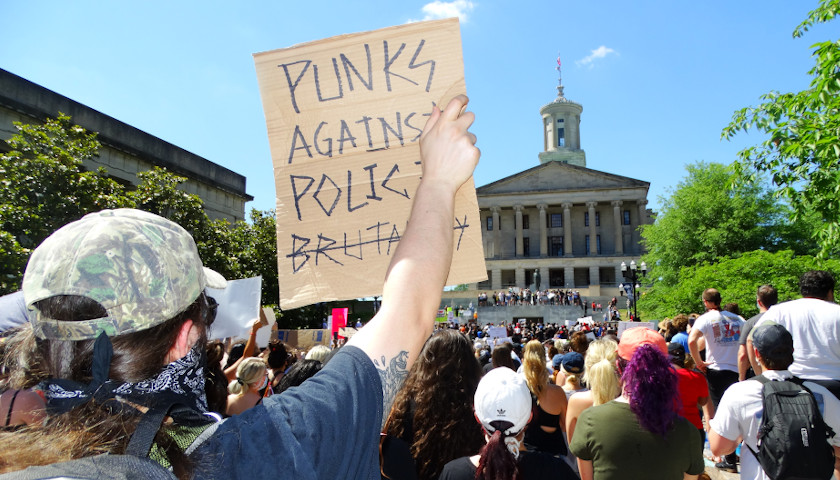 Nashville Mayor John Cooper, State Sen. Brenda Gilmore (D-Nashville), State Rep. Mike Stewart (D-Nashville), and left-wing activist Justin Jones were among only some of the people who addressed the crowd.

Another speaker identified himself as Samuel X. He described himself as “a student of the honorable Louis Farrakhan.”

Samuel X identifies on Facebook as Samuel X Gray, a student minister at the Nation of Islam. He said he had something to say that some people in the audience might not like.

“This world that we live in is suffering from a virus. I’m not talking about COVID-19. I am talking about the virus of white supremacy. Unfortunately, as white people are in support of those who are in support of our cause, many of you are asymptomatic of this through your white privilege, which you can use to your advantage, not by being silent but by actually enforcing your people because it’s not us who needs to make this change. It’s your people who need to make the change,” Gray said.

Members of the crowd then roared with approval.

“And to throw it away is not rebuilding it with the same principles,” Gray said.

“It’s taking what was never there in the very beginning, which is truth, which is freedom, justice, and equality.”

Justin Jones, who, as The Tennessee Star previously reported, has had prior run-ins with law enforcement, said “white supremacy is bipartisan,” and that no one should count on politicians to protect them. Jones then urged members of the crowd to vote.

“A lot of people asked me when I came here, ‘Is it going to be a peaceful rally?’” Jones said.

“I think you need to ask Chief [Steve] Anderson and the Metro Nashville Police Department.”

Mayor Cooper, meanwhile, spoke of equal justice under the law for everyone. He also thanked the crowd for wearing masks to protect themselves against COVID-19.

The Nashville-based NewsChannel 5 reported Saturday that protestors, after the rally, smashed police cars, broke windows, and spray painted graffiti on buildings and cars. Members of the Nashville Police Department did not return The Star’s request for comment on the matter before press time Saturday.