Anoka County Sheriff James Stuart said “many agencies” have “no appetite” for helping Minneapolis in the future if its leaders follow through on a plan to abolish the Minneapolis Police Department (MPD).

“The members of the Minneapolis City Council should be mindful that numerous other law enforcement agencies have responded to support them, to restore order, to protect their citizens and to return peace to their city during recent tragic days. We did this while joining our communities in disgust over the way in which George Floyd lost his life and in hopes of a stronger, unified future,” Stuart said in a statement released on Facebook Sunday night. 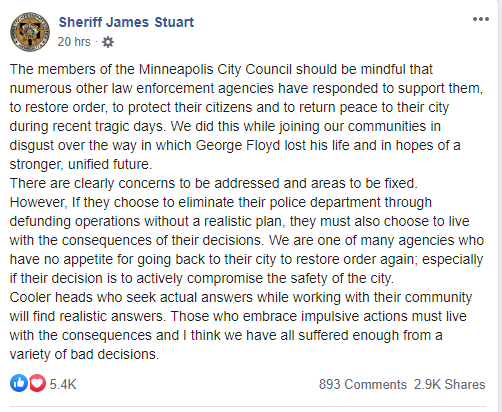 The statement was issued shortly after nine members of Minneapolis’s 12-member council committed to defunding and abolishing the city’s police department. With nine votes, the idea has a veto-proof majority and can move forward with or without the support of Mayor Jacob Frey, who favors reforms over full abolition.

The plan to defund the MPD was announced during a Sunday event at Powderhorn Park hosted by Reclaim the Block and the Black Visions Collective, both of which have been calling on the Minneapolis City Council to defund the police force since 2018.

According to a press release, the nine council members have committed themselves to “ending” the MPD and “creating a new transformative model.”

“We’ll be taking intermediate steps towards ending the MPD through the budget process and other policy and budget decisions over the coming weeks and months,” said the release, which called for a “police-free future.”

Council Member Phillipe Cunningham said the city has “no paradigm for policing that is not rooted in white supremacy.”

“We have a paradigm for safety that is rooted in community and justice. We have seen it the last two weeks. The reality is that people have been doing this work for decades and are not being paid. We have poured that money into the police department and where has it gotten us?” Cunningham said.

Although Stuart believes there are “concerns to be addressed and areas to be fixed,” he called the plan to defund the MPD an “impulsive action.”

“However, if they choose to eliminate their police department through defunding operations without a realistic plan, they must also choose to live with the consequences of their decisions. We are one of many agencies who have no appetite for going back to their city to restore order again; especially if their decision is to actively compromise the safety of the city,” he said.

“Cooler heads who seek actual answers while working with their community will find realistic answers,” he concluded. “Those who embrace impulsive actions must live with the consequences and I think we have all suffered enough from a variety of bad decisions.”