Perhaps 100 to 150 or so protestors claimed Friday night that they had taken control of Nashville’s Legislative Plaza.

They renamed it Ida B. Wells Plaza and draped a black tarp with the civil rights’ journalist’s name over a post visible to almost the entire surrounding area. 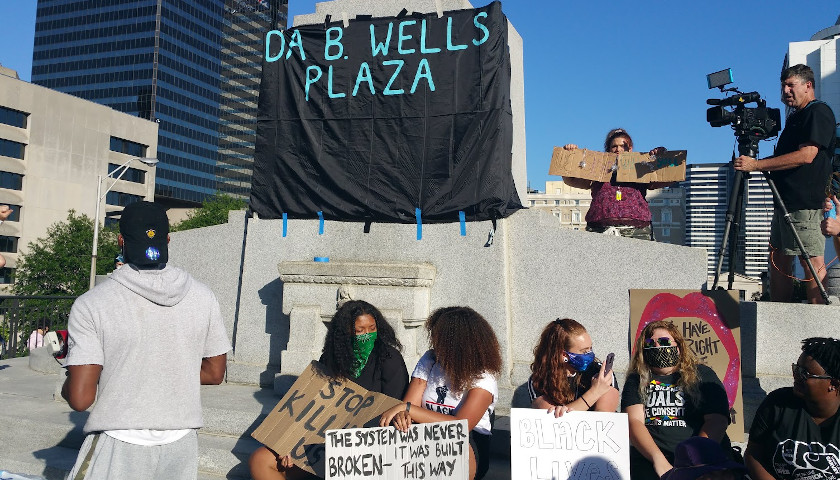 And then the protestors pitched their tents and said they weren’t going anywhere.

As of press time Friday, no law enforcement officers were rounding the protestors up to arrest them, even though such acts, if one is indeed guilty of committing them, are Class A misdemeanors.

A Tennessee Highway Patrol officer told The Tennessee Star around 8 p.m. that no one had instructed him to arrest people as of yet. Other than what they said in their speech, none of the protestors had made any move— such as laying their heads down on pillows — to indicate they would stay the night.

Gov. Bill Lee’s office did not return requests for comment on the matter Friday night.

“The governor seemed a little scared today because we said we were going to spend the night and we meant that, because this is stolen land. This is our land and that we have been marching for weeks now. There has been no change from those in this building. And so we are holding this space. We will set these tents out here. We intend to stay until Governor Lee comes out and talks to people about why we are out here,” Jones said.

As The Star reported Friday, Lee said Friday afternoon that state officials will not entertain any criminal behavior at the demonstration.

8 Thoughts to “Protestors Take Over Legislative Plaza, Refuse to Leave Until They Hear from Bill Lee”