You can view Maxar satellite before and after images through this link.

According to Twitter user @Gerjon, the Sentinel-2 imagery shows the difference at Khojir Missile Base in Iran located at 35.687799 N, 51.651720 E. It looks like fire burnt down 20 hectares of land WNW of a now exploded building.

Satellite photos of the area, some 20 kilometers (12.5 miles) east of downtown Tehran, showed hundreds of square yards of charred scrubland not seen in images of the area taken in the weeks ahead of the incident. The building near the char marks resembled the facility seen in Iranian state TV footage, reported Mr. Moran, quoting a Fox news report.

The alleged gas storage area sits near what analysts describe as Iran’s Khojir missile facility. The explosion appears to have struck a facility for the Shahid Bakeri Industrial Group, which makes solid-propellant rockets, said Fabian Hinz, a researcher at the James Martin Center for Nonproliferation Studies at the Middlebury Institute of International Studies in Monterey, California.

“The project to actively pursue production of nuclear warheads is conducted in Khojir by the Hemmat Missile Industries Group,” a Fox News report noted. “Due to the extreme sensitivity of manufacturing nuclear warheads, Nouri Industry has its own security and military police; individuals who have clearance to other parts of Khojir site are not allowed to go to this section.”

Intelligence findings reported by Mr. Moran also reveal that “scores of large underground tunnels have been constructed in this military complex,” this providing “the possibility and flexibility of covering up the activities of the warhead project, or transferring it to a different location in the complex.” Furthermore, the Iranian Resistance states that North Korean experts cooperate with the regime’s experts in the project, and have been “particularly helpful in designing the aerodynamics aspects, the shape of the warhead, and have also provided the design for the Hemmat site, its tunnels, and underground centers.”

As we reported in our 2017 article, If North Korea Has Miniature Nukes, So Does Iran a report from 2002 had this to say about the nuclear weapons and missile technology cooperation between Iran and North Korea:

Both North Korea and Iran seem to be using the “building block approach,” by developing space boosters that could be reengineered and deployed as ballistic missiles. This approach could allow North Korea and Iran to possess a Limited Range ICBM within the next five or ten years, while retaining the option to develop a Full Range ICBM, without initially committing to such a course. In general, the performance attributed to the various missile systems appear to far exceed the performance that would be seen under real-world conditions while carrying a legitimate strategic lethal payload mass, which would not be sufficient to reach the continental United States. However, they present a legitimate lethal threat to the Europe, Asia, the Middle East, and much of Africa.

It seems that the building block approach is intended to allow these countries to develop the technological and managerial infrastructure of their scientific and industrial base that they do not have now, but which are necessary for the development of a Full Range ICBM in the next 10-15 years… 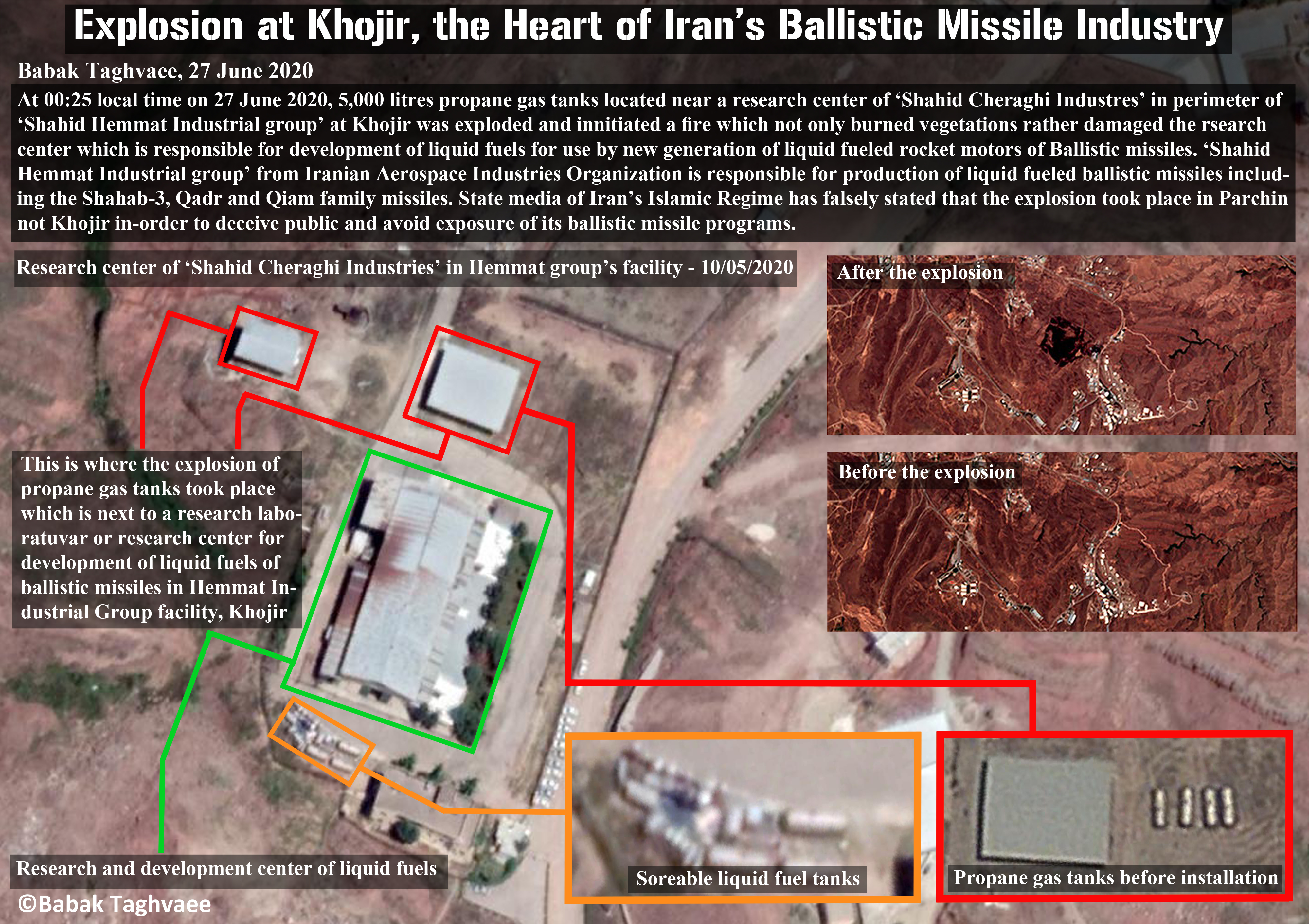 As PJ Media’s Mr. Moran noted, Iran is barred from developing ballistic missiles by UN Security Council resolutions and any indication that they continue to work on them is dangerous.

Some have speculated that the Israelis took out the facility because it was getting too close to marrying a nuclear weapon to a ballistic missile, but so far the Israelis and the Trump administration have remained mum. However, Benjamin Kerstein writing for the algemeiner.com reports in “Security Expert Says Massive Explosion Near Tehran Was Result of Israeli Cyberattack” that the explosion was a result of Israeli action.

Mr. Kerstein reports Theodore Karasik, a senior adviser at Gulf State Analytics, said, “Although military and defense industry accidents do occur in Iran, the consensus appears to be a cyberstrike by Israel against Iran.”

“The ongoing cyberwar between Iran and Israel is not new,” he said, noting an April cyberattack on Israel’s water system, widely attributed to Iran, followed by a much bigger retaliatory attack that temporarily shut down a major Iranian port.

“To be sure, the timing of the explosion is important given continued Iranian mischief in the region,” he added. “As these tensions will probably grow in the coming months, the tit-for-tat nature of cyberwar is part of a troubled security landscape.”

“The Khojir event is a continuation of the Stuxnet virus used 10 years ago to disrupt and deter Tehran’s military industry,” he said.

Whether the blast was the result of a gas leak, as the Iranians claim, or an accident in the lab during experiments on a nuclear trigger or Israeli military action is unknown, but what was going on at this recently-discovered secret military facility certainly bears further investigation.

George Rasley is the editor of ConservativeHQ.com.
Image “Iran After Explosion(s)” by Babak Taghvaee.

One Thought to “Commentary: The Establishment Media Is Ignoring What Just Happened In Iran, But We Won’t”