MURFREESBORO, Tennessee – Dr. Damon Petty, a Nashville-area physician, presented to the Conservative Caucus Saturday his analysis of data related to the excess in deaths and found they are not due to COVID-19.

An economics-degreed Harvard graduate who then went on to medical school, Dr. Petty’s goal was to analyze the data in order to make his presentation reflect the University’s veritas – or truth – shield.  The motto of the University, “Veritas Christo et Ecclesiae,” translated from Latin meaning “Truth for Christ and the Church,” was adopted in 1692.

Petty presented the number of worldwide deaths by COVID-19 as well as several other viruses and other causes of death in a bar graph.

The numbers were so disparate that it made it a challenge to make any comparisons, particularly against the 1918 Spanish Flu.  So, the team physician scaled the world death numbers by a factor of 10, offering a better perspective that the number of COVID-19 deaths is less than the average flu and close to that of suicide and the 2009 swine flu.

In looking at deaths in the U.S., Dr. Petty’s analysis revealed that those from COVID-19 are still far less than the 1918 Spanish flu or cancer and even less than accidents and strokes. 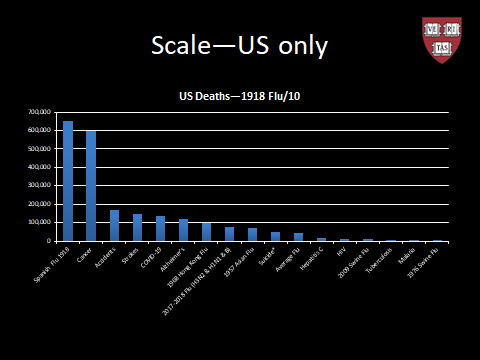 Comparing the average count of deaths in the U.S. by week and age group over the five-year period of 2015 to 2019, Petty found a very repeatable pattern resembling a smile for deaths in people aged 45 and older.

In 2020, Petty’s analysis shows a spike in excess deaths is visible in all but the youngest age group of under 25 years between the 10- and 20-week mark which is between March 1 and May 16.  The spike increased more dramatically over the other five age groups, with the most severe spike being in the 85 years and older population. 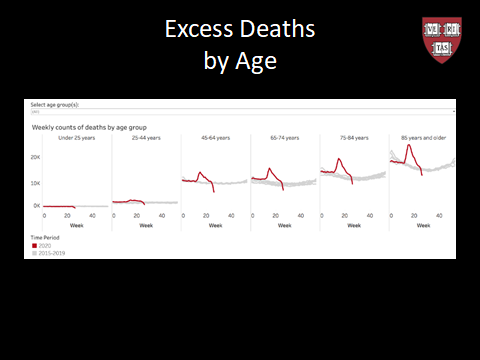 When looking at the excess deaths by cause, Petty found an uptick in respiratory disease-related deaths.  But, the spike is not nearly as significant as that for deaths related to circulatory diseases or Alzheimer’s disease and dementia.

Drilling into more specifics related to deaths due to respiratory diseases, he demonstrated that in the worst week, the spike for influenza and pneumonia amounted to excess deaths of about 600. 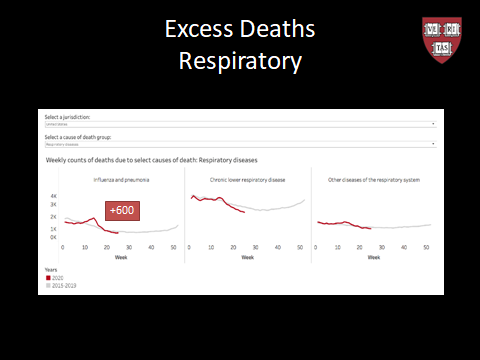 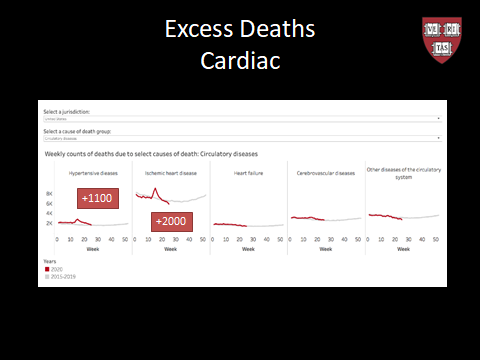 Other causes that contributed to excess deaths in the U.S. included diabetes with 700 and Alzheimer’s disease and dementia with 1,900 in the worst weeks. 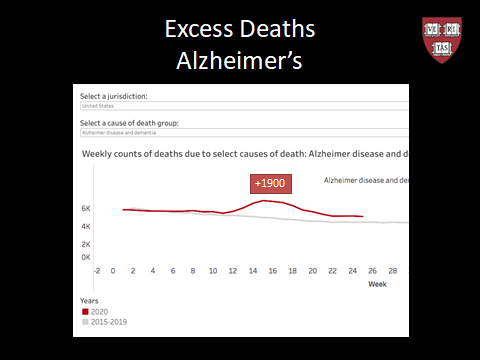 Presented in another way, Petty displayed the total number of deaths in the U.S. above the average since February 1, 2020 by the cause of death.  Influenza and pneumonia, the category in which COVID-19 falls, ranks sixth.

Other diseases of the respiratory system – 1,472

Other diseases of the circulatory system – 339 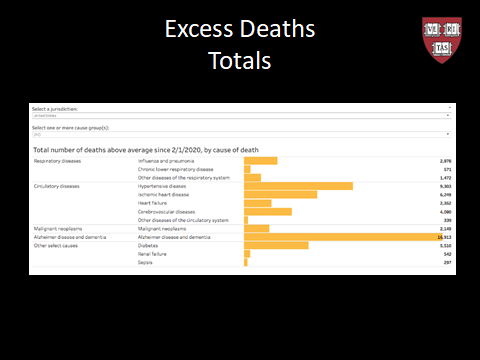 In Tennessee, the number of deaths above the average since February 1 is much less dramatic with influenza and pneumonia falling to 10th.

Other diseases of the respiratory system – 60

Other diseases of the circulatory system – 30 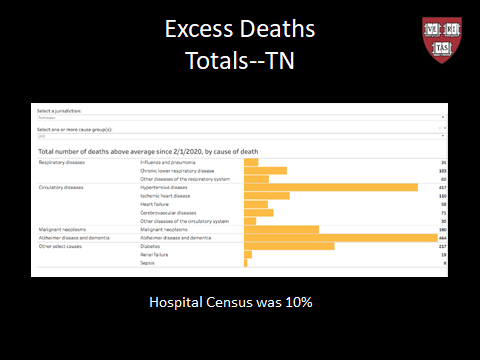 Meanwhile, Petty reports, the census in Tennessee hospitals was at 10 percent.

As another point of comparison, he reviewed motor vehicle accident deaths per one million population against COVID-19. 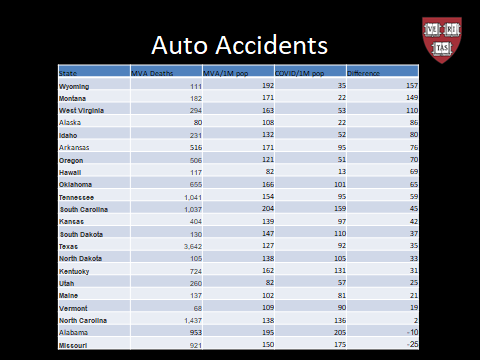 For 20 states, including Tennessee, a person is less likely to die from COVID-19 than they are in a motor vehicle accident.

In fact, the doctor’s data indicates that Tennesseans are at least 60 percent more likely to die in a motor vehicle accident than from COVID-19, and yet there have been no restrictions on motor vehicle travel.

15 Thoughts to “Nashville Physician’s Analysis of Excess Deaths in the U.S. and Tennessee: Not Due to COVID-19”