What a strange time when live it. Over the weekend, a outdoor statue of the Blessed Mother was beheaded at St. Stephen Parish in Chattanooga. This is occurring at various spots throughout the United States.

St. Stephen officials referred all questions Thursday to the Diocese of Knoxville.

Diocese of Knoxville spokesman Jim Wogan told The Tennessee Star in an email that a pastor discovered the damage Saturday morning.

“Anytime something like this happens it is disappointing and concerning. We don’t know if this was the targeted desecration of a sacred statue and our Catholic faith, or some kind of misguided prank, but it hurts,” Wogan said.

“For whatever reason we are living in a very chaotic time and anger seems to be the default setting for people. Our bishop has asked that we live by the example set in the Gospel of Matthew, to treat others as we ourselves would want to be treated.”

Someone tore the statue off the pedestal and removed its head. As of Thursday, church officials had no leads as to witnesses or suspects. The vandals possibly committed a hate crime, Wogan said, quoting a police report. 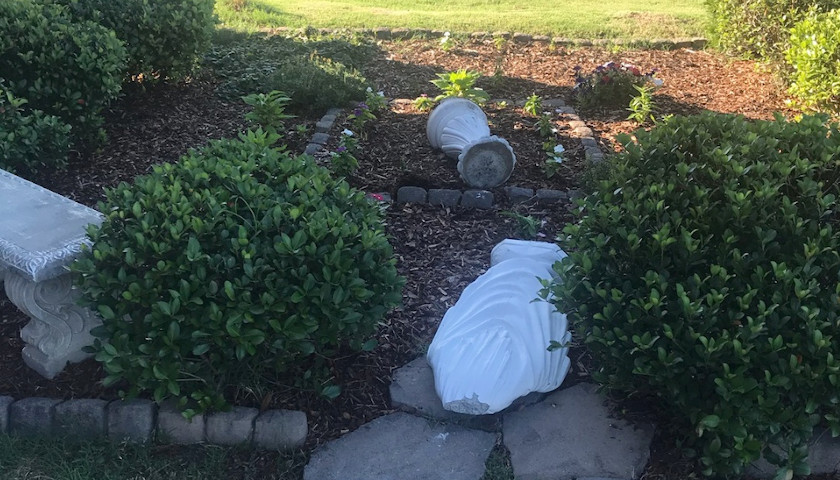 U.S. Rep. Chuck Fleischmann, on Twitter, said this was “a disturbing attack on Catholicism and religion.”

This is a disturbing attack on Catholicism and religion.

Sadly, it is among a series of attacks on Catholic churches that have happened in recent days.

I hope that the perpetrators will be brought to justice, but I also pray that they will find their way to God as well. https://t.co/MFPHZhqn3h

“Sadly, it is among a series of attacks on Catholic churches that have happened in recent days. I hope that the perpetrators will be brought to justice, but I also pray that they will find their way to God as well,” Fleischmann said.

As The Star reported last month, one or more people vandalized the Holocaust Memorial at Nashville’s Gordon Jewish Community Center, according to officials who oversee the facility. Gordon JCC spokesman Deborah Oleshansky said that memorial is about 15 years old.

At the time Oleshansky could not say whether the nation’s current civil unrest provoked the vandal or vandals to act.