NASHVILLE, Tennessee — U.S. Senate candidate Bill Hagerty on Friday described opponent Manny Sethi as a less than true conservative who, on one occasion, donated to ActBlue.

Hagerty said this after he arrived at the Bellevue Library to vote early for the primary election. Several supporters and other volunteers cheered Hagerty as he arrived. 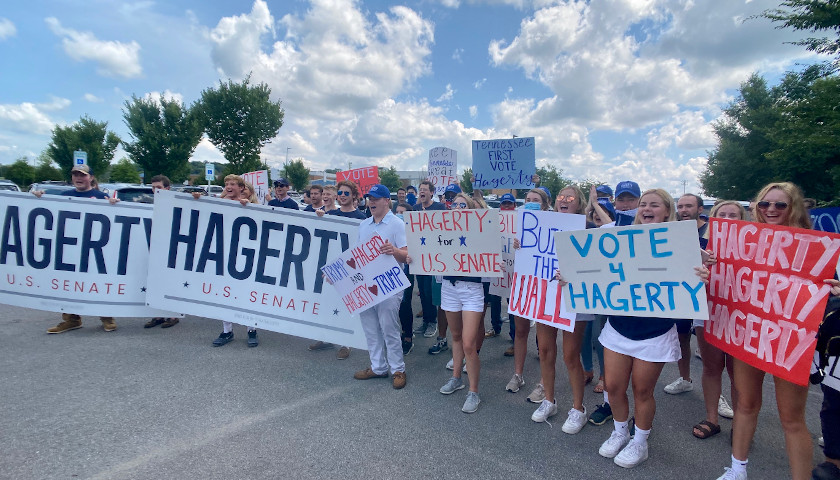 Hagerty said he is “the true conservative that is running for office” who worked to elect U.S. President Donald Trump in 2016.

“I volunteered full-time for six months when nobody else was supporting President Trump, certainly not Manny Sethi. He didn’t lift a finger. He didn’t donate a dime back in 2016 to help President Trump get elected. Now that it’s politically convenient, he can fake himself into a conservative position and he can act like he supports President Trump today but not when it was tough. Not back in 2016 when we had to get elected. Tennesseans need to know that I am the only true conservative in this race,” Hagerty said.

“You have a person in Manny Sethi who has donated to ActBlue. ActBlue funds Black Lives Matter and supports Nancy Pelosi trying to take down Republicans across this nation. They support tearing down our statues, defunding and dismantling the police, and burning our flag. I couldn’t imagine a conservative Tennessean donating one penny to ActBlue, but Manny Sethi did.”

Federal Election Commission filings show that Sethi donated to ActBlue in April 2008. Specifically, Sethi donated $50 to Democrat Congressional candidate Tom Peirrelo in 2008 through ActBlue. Perriello won, but he served only one term. In 2018 Perriello was hired by George Soros’s Open Society Foundation.

But Barnwell-Hagemeyer said Hagerty also donated to people whom conservatives don’t hold in high regard.

“Bill Hagerty is attacking Dr. Manny Sethi for giving $50 to a family friend, meanwhile Hagerty gave $100,000 to Mitt Romney, donated to Al Gore, and Hagerty’s company made millions off Common Core,” Barnwell-Hagemeyer said to The Tennessee Star in an email.

“Hagerty is desperate and scared. He should be—Manny Sethi is winning.”

On Friday The Star asked Hagerty whether Common Core helped earn him a profit.

“I have no regard for Common Core whatsoever,” Hagerty said.

“The best decisions are made locally, by parents and by school boards. We don’t need Common Core,” Hagerty said.

As The Star reported Saturday, Hagerty leads his opponent Manny Sethi by almost four percentage points, according to a poll that a Georgia-based group released. Members of that organization, The Trafalgar Group, polled 1,062 likely 2020 GOP primary voters July 6 through July 8, according to their report.