Presidential Advisor Ivanka Trump and U.S. Secretary of the Interior David Bernhardt will arrive in Duluth Monday. Congressman Pete Stauber (R-MN-08) will escort the pair to Duluth Pack, where the local manufacturing company is scheduled to sign the Pledge to America’s Workers.

The Pledge to America’s Workers is part of President Trump’s creation of the National Council for the American Worker in 2018. By signing the pledge, companies and trade groups commit to “educate, train, and reskill American workers from high-school age to near-retirement,” according to the White House website. Since its inception, it is recorded that over 430 companies signed the pledge and created around 16 million educational opportunities.

The White House stated that the Duluth visit will serve to show their administration’s commitment to supporting workers through increased access to training skills and manufacturing as a whole.

Following their appearance in Duluth, all three will visit Bloomington to commemorate the opening of the Missing and Murdered Native American Cold Case Office, the first of its kind. There they will be joined by Red Lake Tribal Chairman Darrell Seki, Sr. and  Assistant Secretary for Indian Affairs Tara Sweeney. 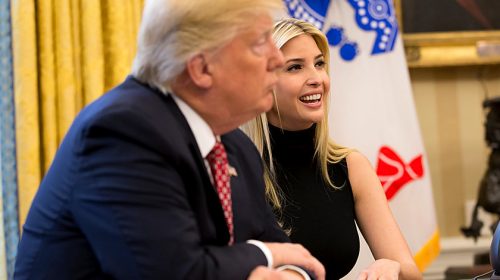 Ivanka Trump’s upcoming trip to Duluth comes after her two-day visit to Colorado. There, she attended a roundtable on the pandemic’s effect on early childcare centers and the promotion of a conservation bill at Rocky Mountain National Park.

Ivanka Trump stated in a press release that these travels directly reflect the President’s high-priority focuses.

“On the heels of our visit to Colorado to celebrate the hard-fought passage of the Great American Outdoors Act, the largest conservation legislation since the founding of our nation’s park system by President Roosevelt 100 years ago, I am looking forward to visiting the great state of Minnesota with Secretary Bernhardt to advance two top priorities for the Administration: the Pledge to America’s workers and supporting the American Indian and Alaska Native communities. With this visit we will further Trump’s commitment to forgotten men and women across our country and the Administration’s efforts to ensure that all Americans can live with dignity and the promise of a brighter future.”

The Trump administration stated that this cold case office is another step toward their goal of improving the criminal justice system for American Indian and Alaskan Native communities.

Earlier this year, the White House proclaimed May 5th as “Missing and Murdered American Indians and Alaska Natives Awareness Day.” These measures were inspired by research revealing poor public safety within Native American tribes, such as data collected in one report on the prevalence of crimes against Native American women by the Department of Justice.

Corinne Murdock is a contributor at The Minnesota Sun and the Star News Network. Follow her latest on Twitter and email tips to [email protected].