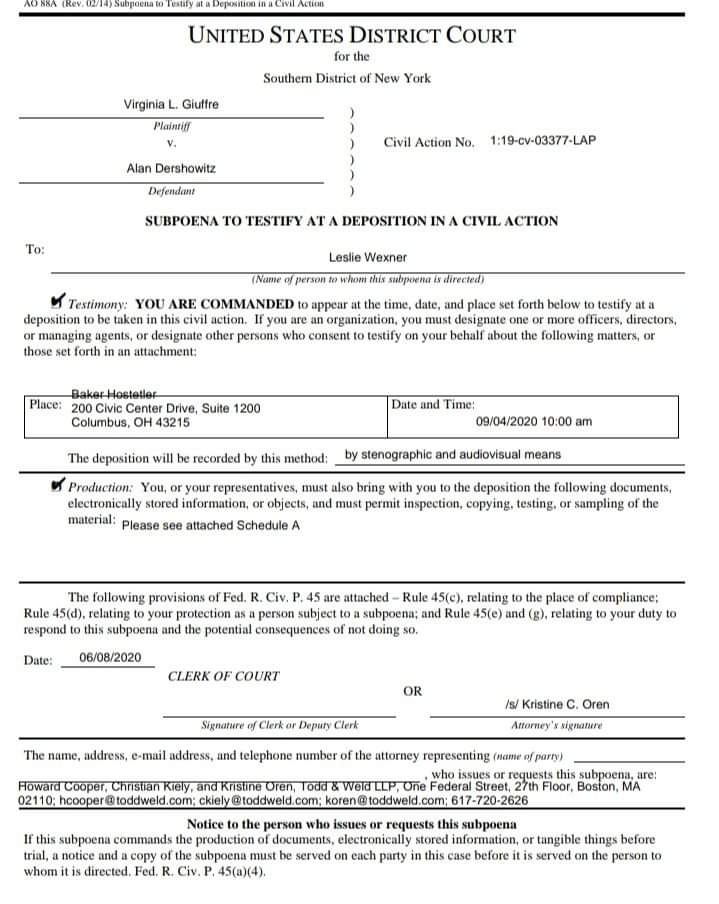 On Monday, August 10 Wexner and Zeiger were subpoenaed by a United States District Court Judge Loretta Preska in the legal battle between Virginia Roberts Giuffre and Alan Dershowitz.

Victoria Roberts Giuffre is an outspoken accuser of convicted pedophile Jeffrey Epstein. Giuffre claims Epstein trafficked her to Prince Andrew, Duke of York, when she was 17, as well Alan Dershowitz.

Dershowitz’s legal team filed the subpoena in the United States District Court for the Southern District of New York on June 8, 2020 to compel Leslie Wexner, and his family attorney John Zeiger, to submit documents and sit for depositions.

Wexner and Zeiger are targets of subpoenas because, according to The Daily Beast: “While Giuffre has alleged that Epstein, a convicted sex offender, trafficked her to other men—including Dershowitz and Prince Andrew—the lawyer has denied the claims. Hitting back, Dershowitz accused Giuffre of hatching a plan to “falsely accuse him of sex trafficking” in order to “extort a settlement from another party, namely Wexner.”

Wexner had close ties with Jeffrey Epstein for decades, beginning his relationship with Epstein in the 1980s. Epstein owned a home adjacent to the Wexner family property, had significant control over Wexner’s fortune, philanthropies and even his personal affairs.

Preska continued: “[F]irst, the Court sees no reason for that correspondence to remain under seal. The parties shall file their respective letters on the public docket as soon as is practicable.” Judge Preska requested the attorneys confer with their clients and report to the court no later than August 13.

In 2019 Wexner wrote to the Wexner Foundation Community (below) “I am embarrassed that, like so many others, I was deceived by Mr. Epstein.” Wexner later said Epstein misappropriated $46 million from his family.  “I condemn his abhorrent behavior in the strongest possible terms.”

The Ohio Star reached out to the Governor’s office and inquired about the decision to seek special counsel in the civil case in the Franklin County, Ohio Court of Common Pleas: Pins Mechanical Co., LLC, et.al. v. Governor Michael DeWine, et.al.

Governor DeWine’s Press Secretary Dan Tierney indicated outside counsel decisions are made by the Attorney General’s office and deferred comment on the questions to that office.

Dave O’Neill, Senior Public Information Officer at the Ohio Attorney Generals’ Office wrote, “[W]e appoint special counsel as needed by state clients. They are hired as a matter of capacity and because of expertise. After consultation with the governor’s office, Zeiger was hired because of its proven track record and proximity to the majority of cases. They have a budget of $98,000 for the referenced case. The total budget for all firms that may represent the state in matters involving COVID-related litigation is $864,000.”