The Comer Barn was a “gift” to Sumner County from Rogers Group Inc. by way of a deed that had no funds involved, County Executive Anthony Holt announced to Sumner County Board of Commission members at several committee meetings in April 2016.

The old and picturesque stone horse barn, considered by many as a historic structure, is located on Highway 31 between Gallatin and Hendersonville on the property of one of Rogers Group’s quarries.  Rogers Group is a road paver and builder, asphalt supplier and the largest privately-owned crushed stone, sand and gravel mix company in the U.S.

Through an agreement executed in 2014, Sumner County leased the adjacent Comer House and 17.4 acres of land from Rogers Group for $100 per year until September 30, 2027.  The Comer House, sublet to the Sumner County Convention and Visitors Bureau, is used as a tourist and welcome center.

Holt had been wanting to renovate the deteriorated barn for some time and use it as an event center, but without owning the barn, Sumner County would not be able to access grant monies.

“Basically what this deed does is…gives us the obligation to make repairs on this property within five years, and if we don’t, (Rogers Group) can take the property back,” Vaughn told Gallatin News. “But we own a landlocked barn…there’s no easements.”

The issue then went quiet for a couple of years.

When it came up again, a Comer Barn Ad Hoc Committee was formed with its first meeting in April 2019 and a follow-up meeting in May.

After several attempts to get some funding to repair the barn, a staggering $3.5 million was snuck into the 2019-2020 Sumner County budget.  The fact that the appropriation was not publicized was evident by the reaction of several of the county commissioners in a video clip from the June 2019 meeting. 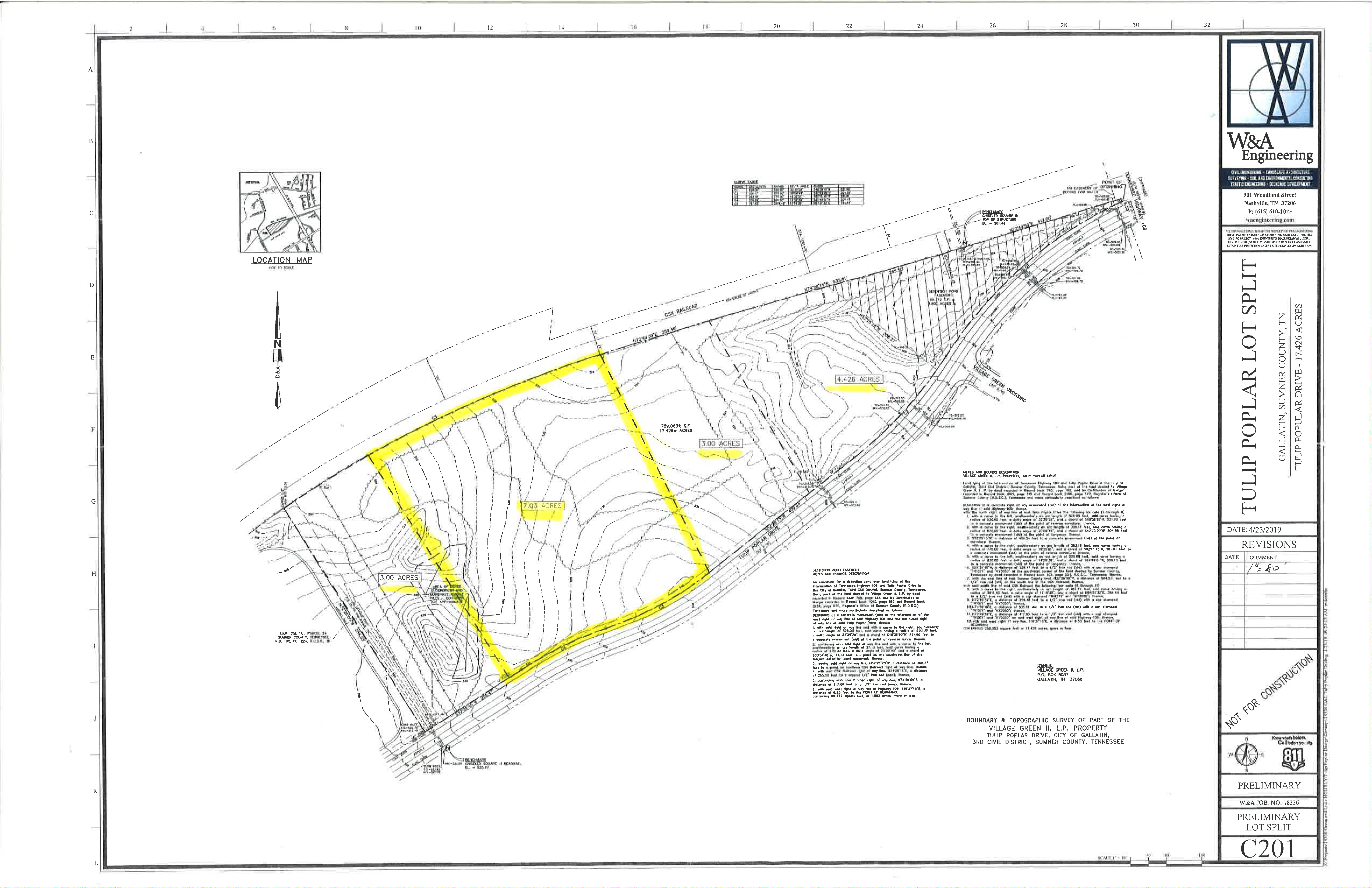 Several citizens spoke against using taxpayer dollars for the barn, given the conditions and reversion clause within the deed as well as developing into a government-funded event center that would directly compete with privately-owned businesses.

Initiated through a motion by Commissioner Moe Taylor, the $3.5 million appropriations to the Comer Barn went on to be removed from the 2019-2020 budget.

Another Comer Barn Ad Hoc Committee meeting was held in July 2019, but none have been held since.

Then in August 2019, Sumner County was notified by the state’s Department of Finance and Administration that it had been appropriated a grant in the amount of $250,000 for Comer Barn improvements, which must be used as one-to-one matching with county funding.  In a letter addressed to the commission, State Senator Ferrell Haile, who represents Sumner County, said he helped obtain the $250,000 one-time grant.

In what appeared to be a cart-before-the-horse scenario, the intent was to present a finalized plan to Rogers Group in order to get the deed restrictions removed before the project proceeded.

At the motion of Commissioner Larry Hinton that garnered a unanimous 23-0 vote, the commission sent the issue back to the Budget Committee to resolve three items: set the parameters and publish procedures for the solicitation of private funds; clarification of the intended use of the Comer Barn and the breadth of the project; and, the Rogers Group put in writing what it is willing to do and present the documents to the public in their entirety.

One curious side note from that meeting came out of the questioning by Commissioner Moe Taylor of Holt about naming rights for the Comer Barn in exchange for a $40,000 donation.

Holt confirmed that local bank CapStar had expressed an interest in the naming rights.

While taxpayers could be on the hook for $3.5 million or more for the renovation of the Comer Barn, CapStar would get the benefit of the advertising rights for a one-time nominal fee of $40,000.

Since January, the Comer Barn has appeared on several of the Budget Committee agendas, reportedly as a placeholder, but it has not been taken up or advanced to the full commission.

That is, until the August 10, 2020, Budget Committee meeting and the upcoming full commission meeting on August 17.

This while the three items detailed in the January 2020 commission meeting have yet to be made publicly available.

However, the commission will consider a resolution Monday that would authorize a plan for the Comer Barn preservation and appropriate $250,000 in county funds to match the state grant of $250,000 to address a prioritized list of action items until the $500,000 is exhausted.

The resolution also states “civic fundraising is being organized and grants are being pursued to minimize use of any additional funding from county tourism hotel/motel tax income to preserve this unique landmark.”

The problem with the plan to use tourism-based income is that when the hotel/motel tax revenues are down, Sumner County taxpayers will be on the hook for the funding.

As it is, Sumner County Tourism Director Barry Young estimated that $300,000 in tourism was lost due to COVID-19 in the one month period between March 8 and an April 8 report by Gallatin News.

In addition to the resolution, a Memorandum of Understanding (MOU) between Rogers Group and Sumner County has been prepared for consideration at Monday’s commission meeting.

The intention of the MOU is to be a basis for completion of final documentation, apparently to address the issues with the original deed that have been repeatedly brought up over the course of more than four years.

Not only does the MOU not address all of the issues, it actually states that it “may not contain all of the terms that would be included in the final documents proposed herein.”

To complicate the already controversial proposal of a taxpayer-funded overhaul of a dilapidated and privately-owned structure in a time of revenue shortages that may also compete with local businesses that have already fallen on hard times, there is the tangled web of who’s who involved in the deals.

The Comer Barn MOU with Sumner County is signed on behalf of Rogers Group by Bryan Ledford.

Ledford sits on the Board of Directors of Forward Sumner, the taxpayer-funded “economic and workforce development office” of Sumner County.  Forward Sumner’s President and CEO is Jimmy Johnston of Brentwood.

Along with Ledford on Forward Sumner’s 21-person board is County Mayor Holt and another Rogers Group representative, Rick Turner.

Rogers Group’s political action committee (PAC) notably contributed $5,000 to the 2014 re-election campaign of Holt.  It was the single largest contribution to Holt’s campaign that year.

Turner also sits on the Sumner County Advisory Board of the previously mentioned CapStar Bank.

Green owns the property behind the County Administration on Tulip Poplar Drive and adjacent to the railroad tracks.

In April 2019, Holt pushed through an approval by the commission for the purchase of a 3-acre parcel of Green’s land for $460,000.

Then, without discussion or explanation, a $1.1 million expenditure was included in the Sumner County Schools 2019-2020 budget to purchase the adjoining 7 acres of Green’s land on Tulip Poplar Drive.

While the approvals took place more than a year ago, there has been no evidence that either of the land deals has been finalized.

Another member of the CapStar Bank Sumner County Advisory Board is Jay Roney.

In Roney’s bio on the board’s webpage, it stated in part as far back as at least January 2020, “he’s very excited about CapStar’s partnership with the Event Center at the Comer Barn,” even though the Comer Barn project has yet to be officially approved by the Sumner County Commission.

Meanwhile, County Commissioner Deanne DeWitt has organized a “Save the Comer Barn” GoFundMe account.  After seven days and 40 donors, $2,945 has been raised toward the $10,000 goal.

Due to restrictions by the Rogers Group on the Comer House and Comer Barn documents, the buildings are prohibited from being designated as “historic.”

That restriction may prevent access to funding for the preservation and restoration of the Comer Barn.

The Sumner County Board of Commissioners will meet at 7 p.m. on  August 17 at the County Administration Building on Belvedere Drive in Gallatin.

The agenda for the meeting, which includes another controversial issue of annexation to Gallatin of “The Meadows” 1,115-unit multi-use development can be found here.