After the Washington Post reported the USPS sent letters to 46 states and Washington D.C., Virginia included, warning that voters may be disenfranchised due to late mail-in ballots, it’s now in doubt that the state’s election deadlines line up with the postal service’s capabilities.

The warning letters were sent by Thomas J. Marshall, general counsel and executive vice president of the postal service, and obtained by The Post through a records request were dated July 30th. The Virginia letter was sent to Christopher Piper, Department of Elections commissioner.

The Virginia Department of Elections did not respond to requests from The Star to speak with commissioner Piper or deputy commissioner Jessica Bowman on the subject.

In the letter for Virginia (see page 42-44), it specifically outlines potential risk of disenfranchisement because of certain state election laws. The letter states, “If a voter submits a request at or near the ballot-request deadline, and if the election official transmits the ballot to the voter by mail 3 business days later, there is a risk that the voter will not receive the ballot before the postmarking deadline or have sufficient time to complete and mail the completed ballot back to election officials in time for it to arrive by the state’s receipt deadline.” 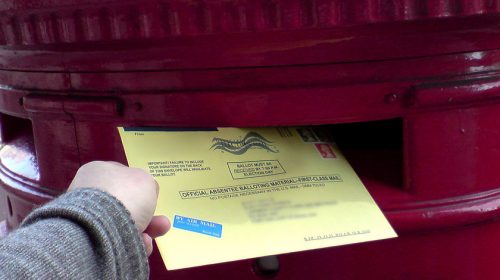 The letter outlines other risks as well and calls for voters to apply for and submit completed ballots well before the deadlines.

“The Postal Service is asking election officials and voters to realistically consider how the mail works,” Martha Johnson, a spokeswoman for the USPS, said in a statement, according to The Post.

Ironically, some of Virginia’s election deadlines were just changed by legislation passed in the 2020 session of the General Assembly.

One bill, HB 239, introduced by Delegate Mark Sickles (D-Fairfax), pushed back the deadline to apply for an absentee ballot from seven days before the election to 11 days. This was one of the specific deadlines the USPS letter identified as part of a potential risk.

“I wasn’t too surprised [by the warning letter] from the rhetoric we have been hearing from the White House and this appointment of an unqualified Postmaster General to run this agency which has had a lot of problems,” Del. Sickles told The Star. “On both sides I think people are very anxious to go vote and they are opposed to anything that would come in the way of their voting.”

With the possibility of mail-in ballots arriving too late to be counted in the November elections, new methods to submit absentee ballots are being implemented in Richmond and other localities.

“In the city of Richmond we are going to have a drive-up and drop-off curbside service on the Saturday and the Monday before the election just for that purpose, but we do encourage people, because of a potential slowness in the mail, to get their [absentee ballot] application in now and not wait,” Showalter said.

Showalter also said that besides dropping off an absentee ballot at offices of general registrars throughout the states, Virginians can use commercial delivery services like UPS or FedEx.

Many localities are even redesigning absentee ballot envelopes by adding a small election mail logo and informing the local USPS liaisons so that postal workers can clearly tell which mail to prioritize, Showalter said.

Additionally, localities across Virginia will have the authority to set up absentee satellite locations, places where voters can submit their ballots, with drop-off boxes for those that do not want to go inside, according to Sickles.

In Virginia, the first ballots will be mailed out on September 18th, but the deadline to apply for an absentee ballot through the mail is October 23rd with a hard deadline of 5 p.m. Absentee ballots should be in the office of the General Registrar by 7 p.m. on November 3rd or postmarked by that date, according to Showalter.

Virginians can apply to vote by mail online on the state board of elections website: www.elections.virginia.gov.