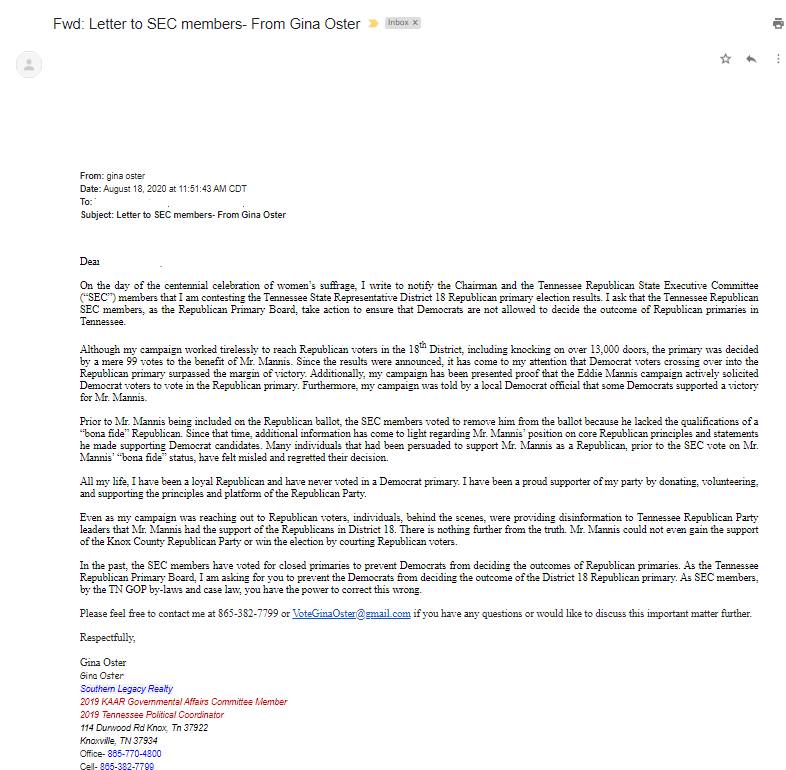 In the two-way race, Oster lost the August 6 Republican primary bid to Eddie Mannis by a mere 99 votes.

With a total of 6,833 votes cast in the race, according to the Tennessee Secretary of State, the 99 vote difference represents 1.45 percent.

A third candidate, SEC member James Corcoran, withdrew from the House District 18 Republican primary after Mannis was deemed to be a bona fide Republican by the party chairman, The Star reported.

The basis for Oster’s contest is set out in state law under T.C.A. 2-17-104 as well as the Rules and Regulations contained within the Bylaws of the TRP.

Oster maintains that the number of votes by Democrats, based on their voting history in the previous four primaries dating back to March 2016, surpassed the margin of Mannis’ victory.

The SEC voted overwhelmingly in December 2018 for closing the primaries, Oster pointed out, “to prevent Democrats from deciding the outcomes of Republican primaries.”

In 2019, two bills were filed in the Tennessee General Assembly in response to the SEC vote.

Both failed in the House Local Committee before being taken up by the Senate State and Local Government Committee.

Functioning as the state Republican Primary Board “with the power to correct this wrong,” Oster asked the SEC to “prevent the Democrats from deciding the outcome of the District 18 Republican primary.”

The next meeting of the Tennessee Republican Party State Executive Committee, during which Oster’s contest is expected to be taken up, is Saturday, August 29 at 2:30 p.m. at the Franklin Marriott Cool Springs, 700 Cool Springs Blvd., Franklin.