NASHVILLE, Tennessee – At the conclusion of the Republican National Convention watch party and protest Thursday evening, Metro Councilman-At-Large Steve Glover said of Republicans, “We want to build up America, not tear down America.”

Glover was referring to the hundreds of attendees at the event that was his brainchild on the grounds of Barbara Mandrell’s former estate, Fontanel, in Nashville.

One of the largest gatherings of Nashville Republicans, Glover said, “It’s got to be something we continue to do, because this is what it’s all about.” 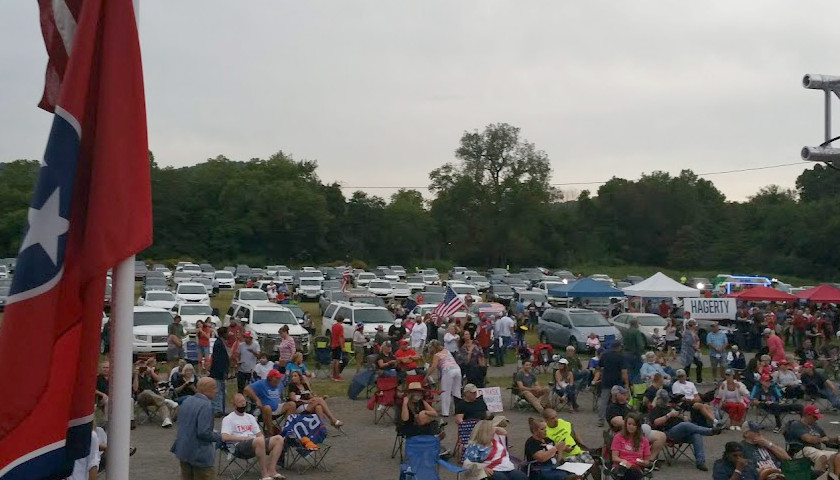 In addition to watching Donald Trump accept the nomination as the Republican candidate for president, the event was a protest against the COVID-19 restrictions and the 34 to 37 percent property tax increase.

As Glover summarized, “There was no violence.  Nothing was damaged.  This is the way Republicans respond. We don’t do like the other side. We don’t tear things up. We want to build up America, not tear down America.”

Long-time conservative leader Ben Cunningham was impressed with the event.

“Steve Glover is the man!” Cunningham told The Tennessee Star.

“He had a vision and executed it beautifully,” said Cunningham.  “Best event of the year!”

About two weeks prior, Glover took to Facebook and proposed the concept of a watch party.  In light of COVID-19, Glover quickly received criticism, even though he was committed to having a location that would allow for social distancing, The Star reported.

Just a week prior, 500 tickets with a cost of $25 each to cover the costs including a boxed barbecue dinner were made available for the event, which was hosted by the Davidson County Republican Party.

Founders of #FreeTN, Kimberly and Josh Edwards, also helped organize the event and told The Star that the tickets were sold out as of the day prior to the event.

About 3:00 p.m., Glover said he got a call from Mayor John Cooper who said that attendees would have to stay in their cars and that the cars had to be spaced six feet apart.  Non-compliance, Cooper informed would result in arrests.

Glover made that announcement before the start of the event and had enough masks available for all attendees.

To keep attendees entertained prior to the official start, several videos played on the jumbo screen including one cartoon of a Joe Biden “campaign vehicle” blaring some of his many “gaffes” getting stuck on railroad tracks and being demolished by a Trump train.

Another was a self-produced “My Corona” parody of The Knack’s “My Sharona” by the Edwards.

The event began with a prayer and “The Star-Spangled Banner.”

As FOX Nation’s Tomi Lahren took the stage to make a few brief comments, a drizzle was added to the hot and humid weather.

Lahren, who recently moved to Nashville from California, said she was happy to be living in a free state.  She couldn’t say the same about Nashville, though, after calling the mayor “a little tyrant” in her Final Thoughts segment for how he has managed the city during the COVID-19 outbreak.

Johnson also performed for the crowd with his band, The Austin Brothers, and said it was like they were the opening act for Donald Trump.

Haile, one of just two Republicans representing Nashville in the state legislature, complimented attendees for not being an “average person” while sitting out in the rain to participate in the event.

He cautioned that Republicans shouldn’t criticize other Republicans, saying it feeds the Left and confuses independents.

Lamberth encouraged attendees to meet two of Nashville’s Republican candidates in the audience – Donna Tees running against Democrat state Representative Mike Stewart and Diane Canada running against Democrat state Representative Bob Freeman for the district previously held by Beth Harwell before her departure to run for governor – who would give a chance to win Republican seats in the State House.

Talking about Trump, Lynn said she hears his Christian voice coming through the TV and recognized everyone has to return to God.

She also said Trump isn’t a typical Republican who gets run over.  “Thank God,” Lynn said, “he runs the Republicans over.”

Freshman Representative Ogles got a great response from the crowd when he spoke briefly about a bill he introduced in the Second Extraordinary Session of the 111th Tennessee General Assembly, which had to be related to COVID-19 or protests per the call by Governor Bill Lee.

Ogles brought forward the legislation in light of the lawlessness that has been going on across the country.

The bill, which was signed into law by the governor last week, prohibits a government entity such as a mayor, council or department of a city or county from intentionally preventing law enforcement or other rescue services from accessing areas during public demonstrations.  Violations of the provision would result in the governmental entity being held liable for the resulting damages, injury or death.

Ogles said the legislation was the first of its kind in the nation, but that other states should follow suit.

Other Republican leaders, Tennessee Republican Party Chairman Scott Golden and U.S. Senate candidate Bill Hagerty who was originally scheduled to speak at the event, were in Washington D.C. for the president’s acceptance speech.

Glover, one of eight who were outnumbered by a vote of 32 in favor of a 34 to 37 percent property tax increase, dependent on being in the general services district or the urban services district, asked who was prepared to give an extra $70 to $100 a month to metro government “because they do such a good job.”

“We have never cut spending ever,” said Glover of Metro’s finances, adding that when more money is needed they turn to the taxpayer for more.

“We don’t have a money problem in Nashville, we have a spending problem.”

Glover contrasted Metro Nashville to the state, saying, “The state is phenomenal at this, lowering taxes and keeping more money in your pocket.”

Glover urged voting in the December special election for the Nashville Taxpayer Protection Act and in any upcoming recall elections.  Glover called for fighting back to move Nashville from deep blue to purple and then to red, which was met with enthusiasm from the audience.

The main act, county music singer and songwriter Kenny Lee, performed Trump’s pick for his 2016 campaign song “Trump Card” and 2020 “We’re All Trumped Up” as well as “The Flag” among others with a few of the attendees dancing along.

After a few rounds of drizzle, a bit of a downpour had many of the attendees return to their cars, which created a drive-in movie type atmosphere.

Those who remained in their chairs, most of whom had umbrellas, stood, sang along to Lee Greenwood’s “God Bless the USA,” and cheered as Donald and Melania Trump emerged like they would if they could be seen and heard by the couple.

Several times during Trump’s more than an hour-long acceptance speech, attendees who stuck it out through the rain until nearly 10:30 p.m. applauded, beeped their horns and chanted “four more years” along with those in D.C.