RICHMOND, Virginia – Standing 21 feet tall atop a 40 foot base and weighing 12 tons, the statue of Robert E. Lee and his horse is literally larger than life as the General presides over Richmond.

French Beaux-Arts sculptor Marius Jean Antonin Mercié cast the bronze statue in nine pieces – seven for the horse, and two for the rider, according to the monument’s National Register of Historic Places (NRHP) registration form. The base, a granite pedestal, was designed by Paul Pujol, a French architect. The monument sits in a 200 foot circle of grass in the middle of a traffic circle at Monument Avenue and Allen Avenue.

“Mercié’s equestrian statue memorializes Lee’s accomplishments as a military hero of national stature as well as regional significance. Placement of the statue was intended to perpetuate the memory of Lee’s character as a man of heroic action as well as to herald the emergence of a New South from the adversity of defeat and Reconstruction,” the registration form states. 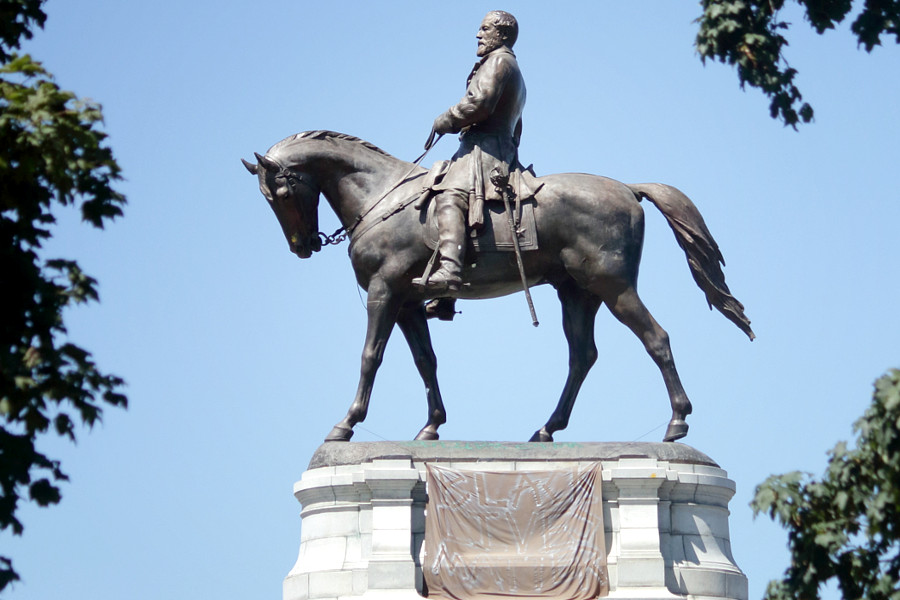 The idea to build a monument to Lee arose shortly after his death in 1870, but two rival organizations fought over the project, the form states. The state took over the project and merged the rival organizations, and in 1887 the new Lee Monument Commission selected a site, given to the state by businessman Otway S. Allen. Mercié presented several designs to the commission, making changes as needed.

“The new design reflected his patron’s civic and political aims to erect a statue that complemented the monument to George Washington on Capitol Square. On the order of Archer Anderson acting on behalf of the Lee Commission, Mercié agreed to increase the overall height of the statue so that it would be taller than Richmond’s Washington monument,” the NRHP registration form continues.

The sculpture cost $17,000 and the pedestal cost about $11,000, for a total of $29,000 – over $800,000 today. The Lee Monument Commission was responsible for fundraising efforts. In 1917, journalist Lida Rose McCabe recalled that Mercié had already gained fame and wealth after such works as “The Genius of the Arts”, a relief on the façade of the Louvre, and a famous statue of David. McCabe wrote that Mercié was also respected in the United States for his statue of the Marquis de Lafayette in Washington D.C.’s Lafayette Square.

McCabe describes the sculptor’s studio in France and the objects Mercié used to make the statue: “A life-size plaster model of the statue held center stage in Mercié’s beautiful studio. On the wall hung the saddle, boots, and spurs worn by the Duke de Chartres in our Civil War, in which he fought on the Union side.” McCabe wrote. “From a chest [Mercié] brought forth the General’s battle-stained uniform …. His hat, redolent of powder and time, which had also served as a model, was … atop its plaster counterpart.”

On March 4, 1890, The Richmond Dispatch reported that the city Finance Committee approached the city’s Common Council and Board of Aldermen asking for $7,500 for the unveiling.

“John Mitchell, Jr. , a colored member from Jackson Ward, made a speech, which he began by saying that he was a great admirer of General Lee and ended by asking that those who wore the “clanging chains” should be allowed to keep silent and not vote,” The Richmond Dispatch wrote.

The monument was unveiled on May 29, 1890, in front of a crowd that had up to 150,000 participants. The NRHP registration form says, “The event unveiled an icon of the cult of the Lost Cause for white Southerners and symbolized the emergence of a New South from the adversity of defeat and Reconstruction.” 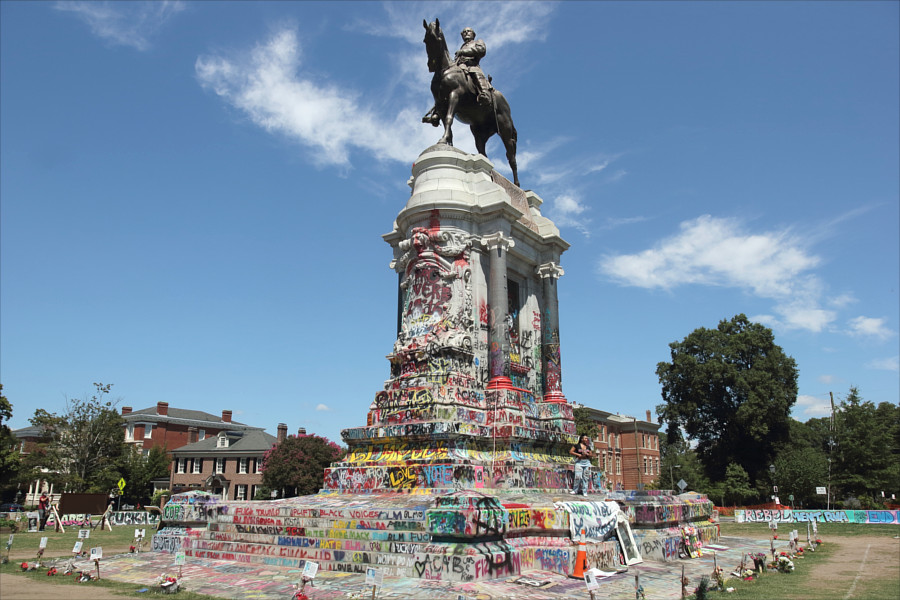 Mitchell was also editor of The Richmond Planet. On May 31, 1890, he wrote in the paper, “But what does this display of Confederate emblems mean? …. This glorification of States Rights Doctrine — the right of secession, and the honoring of men who represented that cause, fosters in this Republic, the sport of Rebellion and will ultimately result in handing down to generations unborn a legacy of treason and blood.”

In 1890, the statue stood alone – contemporary photographs show it standing in a field. Richmond grew up around it. Other monuments were added to the new Monument Avenue, four of them in all, honoring other men of the Confederacy. In 1996, a statue of famous Richmond athlete Arthur Ashe was added to the group. Trees and a grassy median run down the center of the avenue, and houses line the edge.

As Richmond grew, so did the South.

“Civil War monuments, especially Confederate monuments, are a refraction of the war’s realities and outcomes, speaking more to the time period in which they were put up than to the actual war,” University of Cincinnati historian Christopher Phillips wrote in an email to The Virginia Star.

After George Floyd was killed, protests erupted across the country, and quickly found their way to the Lee Monument. Protesters have covered the monument with messages against systemic racism and violence.

On Sunday afternoon, Richmond Action Alliance community organizer Crystal Suber was helping at a voter registration booth at the Lee monument. Suber knows the power of the monument’s message. “I still remember the first time I came down here as a child and looking up and thinking of them as heroes,” Suber told The Virginia Star.

“Seeing the monuments, they’re big, … they really are beautiful pieces of art, but they were erected with a certain purpose and to stand tall above everyone else and that’s not reflective of all people.”

Suber added, “I am a person of color, so it means something very different to me. I was very bothered by the way history was taught to me then …. I had to find out for myself and just sort of become more aware of how things really are.”

In a June 1, 2020 press release, the Sons of Confederate Veterans wrote on Facebook, “The recent outbreak of violence against not only War Between the States monuments and many other American monuments and sites is a display of crude anti-American criminality….We also condemn those who would use the heartbreaking death of Mr. Floyd to further their anti-American agenda.”

Today the monument still stands, once again without its Confederate compatriots, protected by a lawsuit preventing the state from removing it.

Eric Burk is a reporter at The Virginia Star and the Star News Digital Network.  Email tips to [email protected].
Photos by Eric Burk.