Ohioan Vanessa Treft is a political grassroots consultant who has worked in multiple states – Treft is a Trump supporter.

Treft has been outspoken about Ohio’s COVID response – from her grandmother’s inability to receive hydroxychloroquine immediately following a COVID diagnosis, to her calling out Ohio Republican Governor Mike DeWine’s refusal to adequately address senior living situations.

Treft was also vocal about the former Ohio Department of Health Director Amy Acton and recently criticized representatives and senators for their lack of gumption to make needed changes, as saw necessary.

On September 2, Facebook deleted Treft’s profile without warning, reason or any opportunity for appeal and recovery. She has since created a new account but lost 7,100 friends and followers – just over 60 days before the 2020 U.S. presidential election.

Cancel culture is a term thrown around loosely. Over the past year, it has increasingly become a thing – it’s as if COVID brought a unilateral mindset to the surface bent on silencing detractors. Facebook is where it has become especially evident.

The Ohio Star published an article about the CDC Weekly Index from the week of August 24 that confirmed that the virus is most dangerous to people with more than two existing health conditions, but it is likely that not all current COVID deaths were the result – whatsoever – of the virus. However, Facebook’s artificial intelligence did not like the words or phrases and tagged the post with a fact-check warning. 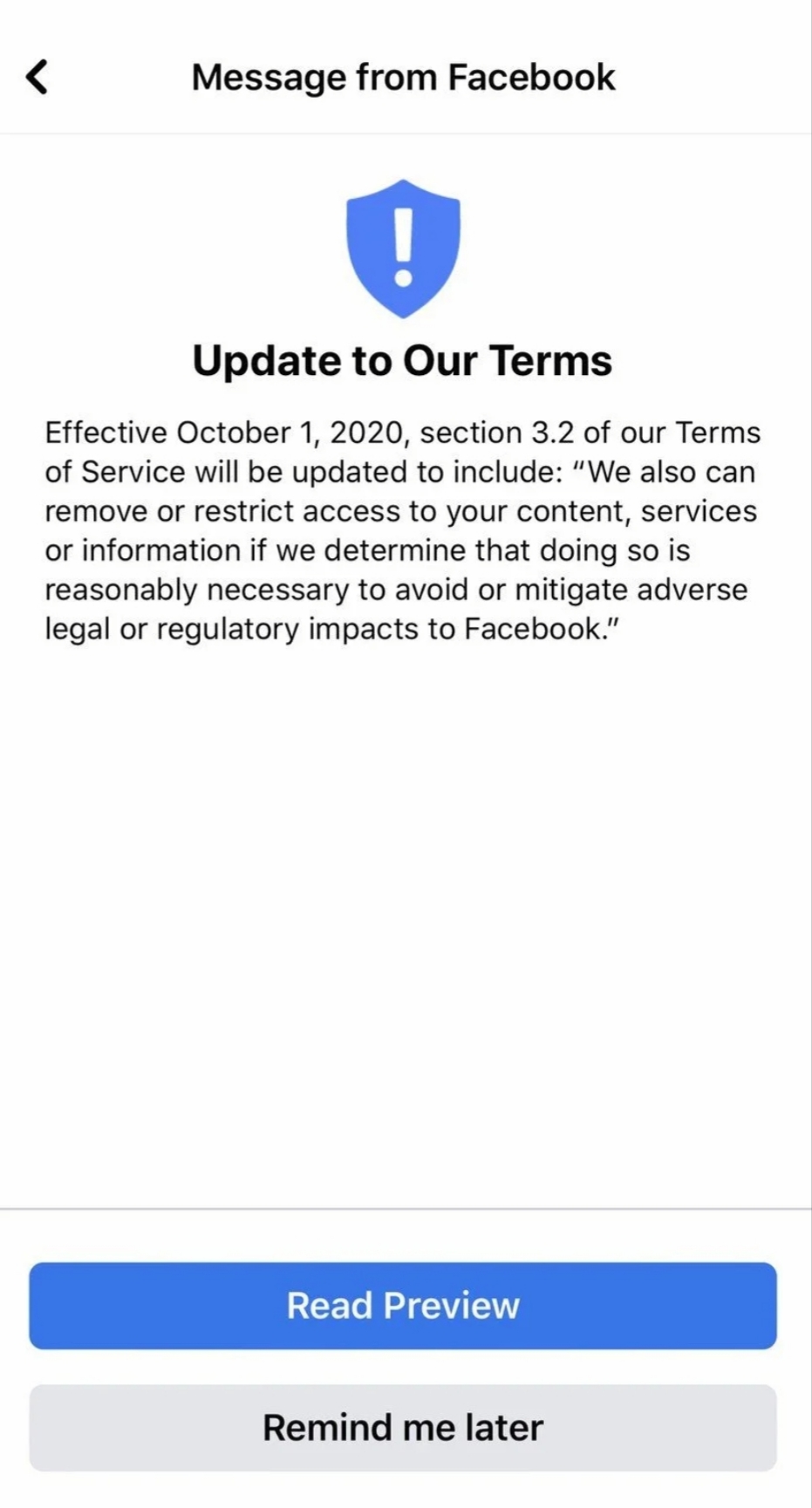 Instead of loosening the grip, Facebook appears to be tightening the content stream as the behemoth social media company (larger than mainstream media outlets) announced Tuesday the Terms of Service (TOS) changes coming October 1.

The TOS changes and investment in the election process were both pitched as efforts in fairness.

On Thursday, Facebook announced it will limit some ads leading up to the November 3 election but will give more liberty to politicians running ads on the platform.

Facebook is in an ambiguous space between social media platform and publisher – what the company is deemed is a prolonged debate. The city-journal.org wrote May 7, 2018:

Section 230 of the Communications Decency Act immunizes online platforms for their users’ defamatory, fraudulent, or otherwise unlawful content. Congress granted this extraordinary benefit to facilitate “forum[s] for a true diversity of political discourse.” This exemption from standard libel law is extremely valuable to the companies that enjoy its protection, such as Google, Facebook, and Twitter, but they only got it because it was assumed that they would operate as impartial, open channels of communication—not curators of acceptable opinion.

But “curators of acceptable opinion” is exactly what Facebook appears to have become; and as such, the left-leaning company does not seem to qualify for the protections of a social media platform.

“Hours before my account was deleted, I posted a video about phone calls I received that day,” said Treft. “One of them discussed a pastor who lost his sister earlier in the week he was unable to see – and he had a second sister in the same facility, also dying, he couldn’t’ see.”

“The other story was about a woman who had zero access to her mom and wasn’t there when she died. When she went to get her personal effects, she was forced to gather her mother’s belongings off the street curb. My video had been viewed over 15,000 times. Then, poof! My account was gone.”

Treft also encouraged Ohioans who may be struggling with situations involving nursing homes to reach out to the Office of the State Long-Term Care Ombudsman.