LEXINGTON, Virginia – In a talk that was part campaign speech, part motivational lecture, Vice President Mike Pence spoke to over 1,800 people on Thursday at the Virginia Military Institute (VMI). Pence emphasized the Trump administration’s support of the military and its families. He concluded with a charge to the cadets to lead through integrity.

In addition to VMI cadets and faculty,  VMI graduates Secretary of the Army Ryan McCarthy and U.S. Congressman Michael Waltz (R – Florida) were present. The event was not open to the public because there was not enough socially-distanced room. 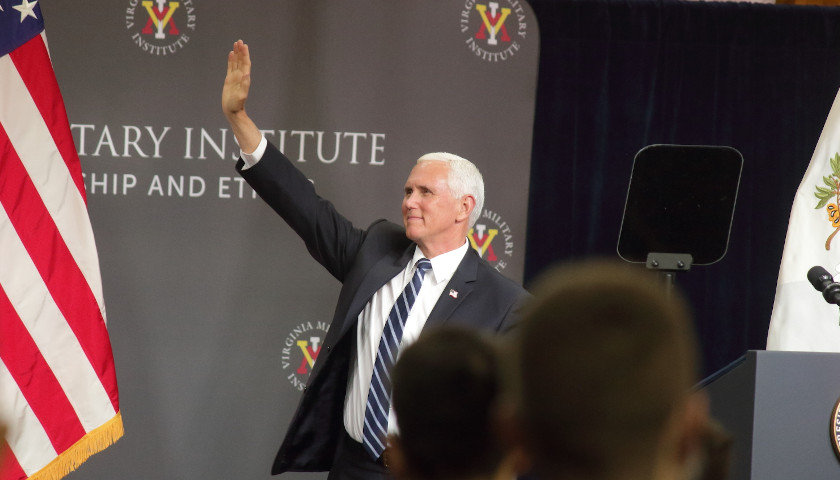 Pence cast the current class of VMI cadets as part of a larger history of VMI alumni who fought for the U.S. after the 9/11 attacks. “Your generation has been a part of the fact that we will reach the 19th anniversary of that dark day having had no major terrorist attacks on American shores,” Pence said. “I want to say thank you…. You have made America safer everyday.”

Under the Obama administration, the armed forces were “hollowed out,” Pence said. “But all that changed when President Donald Trump stepped into the White House.” He added,  “We provided for our active duty military personnel the largest pay raise in nearly ten years. President Donald Trump signed the largest increase in our national defense fund since the days of Ronald Reagan.”

“We didn’t just rebuild our military,” Pence said.  “With a vision of the future and our national security challenges, President Donald Trump created the first new branch of our armed forces in 70 years, the United States Space Force.”

“I can tell you first hand our president reveres the men and women of our armed forces,” Pence said, indirectly addressing a recent anonymously sourced article that said Trump does not respect fallen service members. “I’ve seen this president’s heart in countless private moments where I’ve been able to be at his side. I literally watched him after an address at Arlington National Cemetery on Memorial Day,” Pence said. “I saw him approach a bereaved mother who was there on that day of days, flowers in hand. And [she] just looked her president in the eye and asked him to always remember the name of her son Jimmy. And I saw this president assure her that he would.” 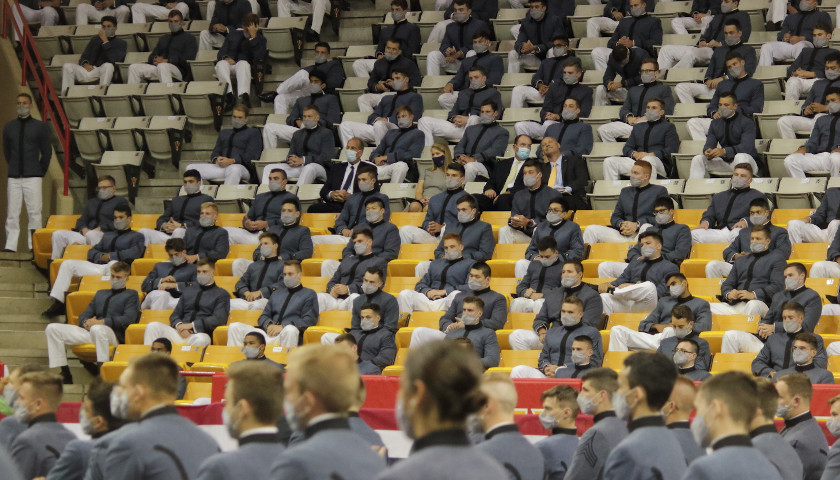 “I can tell you: President Donald Trump reveres and honors the members of our armed forces and their families,” Pence said.

VMI Director of Communications Bill Wyatt said the institute invites dignitaries as part of the leadership development for the cadets, and has had people ranging from Hillary Clinton to President George W. Bush. “It’s important for us to provide this opportunity to our cadets so that they can hear the wisdom from different perspectives and different leaders, ” Wyatt said.

Pence offered several pieces of wisdom. “First and foremost, I’d encourage you to approach your calling with humility. Consider others as more important than yourself. Take care of men and women and children alongside you…As was written long ago in the words of the Nazarene, wherever you go, whatever you do, go not to be served, but to serve.”

“Secondly, I encourage you to embrace orientation to authority, ” Pence said. “Submit yourself to the authorities placed over you. Trust your superiors….and through your actions you will help inspire those you are leading to be better leaders as well. To be a good leader you must first be learn to be a good follower.”

“Lastly I want to challenge you to be men and women of integrity. People follow people that they trust,” Pence said. “Take time to develop the inner man and the inner woman. Develop the qualities of character.”

“On behalf of your president and a grateful nation, I just came to say that we’re proud of you, we’re behind you, ” Pence said.

“I leave here today confident that so long as America produces men and women like the cadets of VMI … I know the best days for America are yet to come, so thank you and God bless you…. Never say die VMI,” Pence finished.