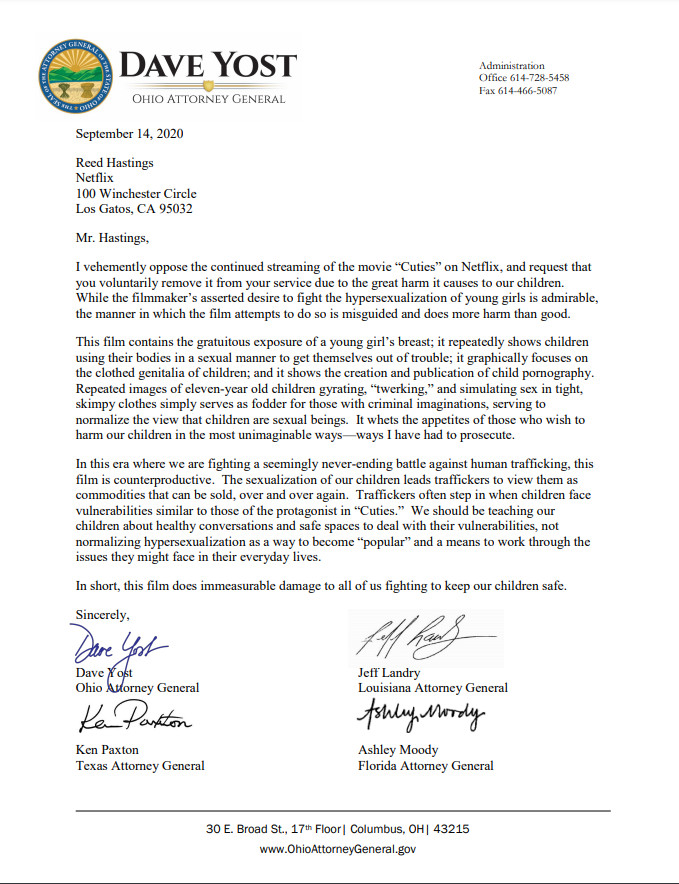 The group called the filmmakers stated goals of fighting the hypersexualization of children “admirable” but noted that how “the film attempts to do so is misguided and does more harm than good.”

The group pointed to the contents of the movie as evidence of the harm that’d be caused to children.

This film contains the gratuitous exposure of a young girl’s breast; it repeatedly shows children using their bodies in a sexual manner to get themselves out of trouble; it graphically focuses on the clothed genitalia of children; and it shows the creation and publication of child pornography.
Repeated images of eleven-year old children gyrating, “twerking,” and simulating sex in tight, skimpy clothes simply serves as fodder for those with criminal imaginations, serving to normalize the view that children are sexual beings. It whets the appetites of those who wish to harm our children in the most unimaginable ways—ways I have had to prosecute.”

The letter goes on to call the fight against human trafficking “seemingly never-ending” and the movie “counterproductive.” and goes on to state that “the sexualization of our children leads traffickers to view them as commodities that can be sold, over and over again. Traffickers often step in when children face vulnerabilities similar to those of the protagonist in ‘Cuties.'”

Co-signer of the letter and Florida Attorney General Ashley Moody took to Twitter to echo the letters discontent saying she was “disgusted and discouraged” by the film.

As a mother and public servant dedicated to #EndHT and the sexual exploitation of our children, I am disgusted and discouraged that Cuties is being circulated in mainstream media.

I am calling on @netflix to remove this film from its platform.https://t.co/EfgUJrK2C2

Netflix continues to take heat for the publication of the movie, with the director reportedly receiving death threats for her part in the work.

As of now, there has been no statement about the letter from the streaming giant.

Ben Kolodny is a reporter for The Ohio Star and the Star News Network. You can follow Ben on Twitter.
Photo “Cuties Movie” by Netflix.