Bergmann, according to her Facebook page, is scheduled to speak at the Shelby County Republican Party’s Outreach meeting at 6 p.m. Central Monday at its headquarters at 750 North Germantown Parkway in Memphis.

“I want to see you there,” Bergmann wrote.

“I need your support if you plan to help fight to win this election.” 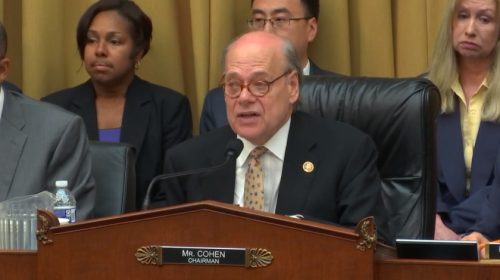 Bergmann, according to her campaign website, is a Memphis native, a Christian, and was the first member of her family to attain a college education.

“In 2018, Charlotte was awarded the Statesmen of the Year Award from the State Republican Party. She was then elected to the Tennessee State Executive Committee for TN District 33. Since 2010 Ms. Bergmann has also been a Radio and TV Commentator on Informed Sources both on local TV Channel 3 news and KWAM 990 AM radio,” her website said.

“In July of 2019, Charlotte released her new book, The Last Trumpet, describing how we are in a Battle for America, and that we need to debunk the lies and miss-truths of the Left and that we must think for ourselves. This is especially true to gain independence and to be set free from the cycle of dependency.”

According to LocalMemphis.com, Bergmann reportedly said the following about Cohen:

“For thirteen years Cohen has been our Representative in Washington and has done little to help his constituents back home. I’ve asked him about improving Memphis and getting a handle on crime. His response has basically been, ‘I deal with Federal issues,’” Bergmann reportedly said.

“You cannot represent a district adequately in Congress in a vacuum and ignore the conditions on the ground. I know there are things a Congressman can bring to the table to fix many of the problems we have.”

As reported last month,  Cohen reportedly deleted a tweet he wrote that prompted another person to say U.S. Sen. Tim Scott (R-SC) “might as well be” white.

This, according to FOX News, which acquired screenshots of the conversation before Cohen deleted it.

As The Tennessee Star has reported several times, Cohen takes political and personal jabs at U.S. President Donald Trump whenever and wherever possible.