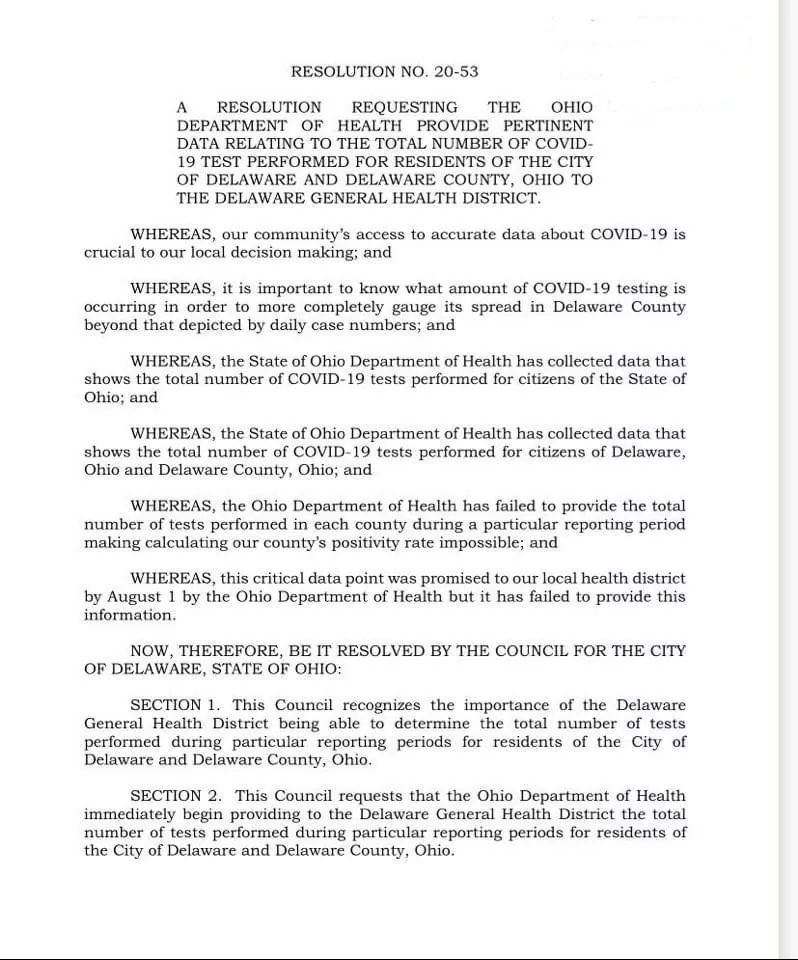 The resolution states “our community’s access to accurate data about COVID-19 is crucial to our local decision making.”

“The Ohio Department of Health has failed to provide the total number of tests performed in each county during a particular reporting period making calculating the county’s positivity rate impossible.”

Before the meeting, a group of five Ohio Wesleyan University (OWU) professors issued a memorandum to the City of Delaware opposing the resolution.  OWU is a private college located in Delaware, Ohio.

“We write as experts on strategy for addressing the pandemic at various levels,” the memorandum states.

The professors cite the positive test rate as an ineffective data point – “a low positivity rate is often mistaken for a low risk of exposure. So if we have currently low rates, and then change policy based on that, while having people commuting to Columbus, Ohio State, out of state, etc., then the risk of spread increases dramatically here due to the misunderstanding of data.”

They believe the best gauge of spread is “per capita rate of infection.”

Cases per capita are measured by the Ohio Public Health Advisory System (OPHAS). The system assigns a threat level to each of Ohio’s 88 Counties based on seven indicators – one of those indicators is the number of positive cases per capita.

The Ohio Star reported, cases do not necessarily equal infections.

False positive tests have been problematic in the NFL, on college campuses and for Ohio’s own governor.

Cases per capita is triggered and counted against a county if more than 50 cases are recorded for 100,000 residents.

Cases per capita amplifies the impact of a positive test for counties with fewer than 100,000 residents – which accounts for 61 of Ohio’s 88 counties.

In August Morgan County tripped the indicator with just 8 positive tests because the county only has 14,505 residents the per capita adjustment showed an incidence of 55.14 cases per 100,000.

Governor DeWine registered a false positive on an antigen test – a test so erratic that University Hospitals in Ohio began replacing the tests for COVID testing protocols.

Recent studies in New York, New Jersey and Nevada indicated that Polymerase Chain Reaction (PCR) tests – seen as the gold standard in testing – are being processed at cycle thresholds that are too high. Consequently tests are detecting dead fragments of COVID and registering positive results without a live, active virus to blame.

Worse, the tests may also be detecting fragments that aren’t even COVID – “[e]veryone has probably had a cold caused by a coronavirus and will likely have a few viral fragments matching those of the cousin SARS-CoV-2 virus.”

The significant rub between the City Council and the professors is the freedom of information.

State Representative Kristopher Jordan (R-Ostrander), the area’s delegate to the Statehouse, said “When this much of our freedom is being taken away don’t we deserve to know the reasons why that’s being done to us?”

Ohio Wesleyan University Director of Media and Community Relations returned a call from The Ohio Star and said OWU declined comment on the actions of the professors since they are representing themselves.

The Star also reached out to the five professors for comment but received no communication back as of the time this story published.

Ohio State Senator Andrew Brenner (R-19) the area’s elected official to the upper chamber of the Statehouse said  “I find it preposterous these Wesleyan professors would recommend that more information is bad for the public, when we are pushing for transparency.”

The professors see the request for information and use of the positive test rate as a vote of no-confidence, “to challenge the Ohio public health experts, and Governor Mike DeWine, in this form, is to in effect undermine public trust.”

Records include all records kept by any public office as well as records of both non-profit and for-profit private schools.

“I think the data should be made available to the public so it’s easily available and transparent with what it is showing. We get lots of data but it can be buried” said Senator Brenner.

The profs believe that City Council should educate the public “Instead of voting on measures that would confuse the public.”

After the City of Delaware received the memorandum from the professors, Councilwoman Lisa Keller posted the document on her Facebook page.