Sponsored by Sen. Ghazala Hashmi (D-Chesterfield County), the bill passed by a vote of 20-Y 15-N along party lines of the present senators.

Under the bill, localities have the option of whether to establish a civilian review board, which the local government would appoint its members. 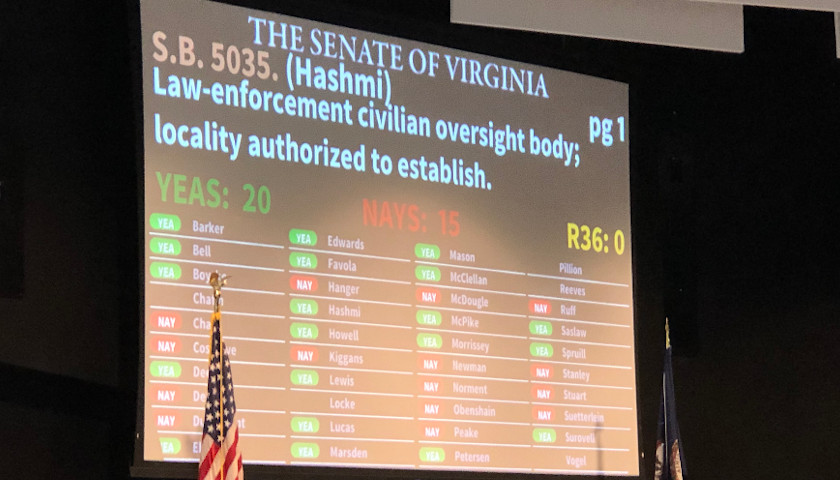 The review board can also after speaking with the officer or their supervisor make binding disciplinary decisions for law enforcement officers in cases of serious violations of standards that include suspension with or without pay, rank demotion, mediation and even termination.

“SB 5035 is a significant part of our legislative efforts to restore public confidence and trust in our law enforcement agencies,” Hashmi said during session. “This bill is enabling legislation and it gives localities the opportunity to establish civilian review boards that are meaningful, independent of police departments and that helps police transparency and accountability.”

Included in the bill is the ability for the review boards to ask a circuit court judge in that locality to issue a subpoena for a person to appear before the oversight body. Additionally, legal counsel can be retained to represent the board when necessary.

State police, sheriffs departments and other agencies like the Capitol Police would not be subject to the civilian review boards if their locality chooses to establish one.

The majority of Republicans who were present Tuesday spoke in opposition of the bill.

Most arguments from conservative lawmakers centered around the bill’s provisions of having no active law enforcement board members, the body being able to ask a judge to issue subpoenas as well as the adverse effect the bill would have on good officers leaving their jobs.

“What’s going to happen if we create a citizen board that has unparalleled authorities that we’ve never seen in Virginia,” Senate Minority Leader Thomas Norment (R-James City County) asked. “We’re going to see boards that can make a recommendation on a career of a law enforcement officer when they know nothing about law enforcement, and they are going to insist on some egregious, egregious punishments against law enforcement.”

During passionate speeches against the bill, several Republicans brought up the two Los Angeles County sheriff’s deputies that were recently shot by a gunman in California, as an example of violence against police, while others had their own personal qualms.

“We’re usurping the entire [judicial] system here,” Sen. Bill DeSteph (R-Virginia Beach) said. “And frankly, I’m appalled of what we have done to our police departments, our sheriffs and our law enforcement in this body.”

Despite over two hours of comments and speeches from lawmakers on both sides, the bill was never in doubt of passing thanks to the body’s Democratic majority.