NASHVILLE, Tennessee – I first saw Trannie Anderson at the Listening Room when I went to see Levi Hummon and his dad, Marcus Hummon. I immediately liked her that night. When I went to see the Song Suffragettes a few weeks later and she sang a song she had written with/for Gabby Barrett, I knew I wanted to learn more about her.

Anderson hails from Waco, Texas. Her family was not all that musical. Even though her mother could play the piano a little bit, she was a professional golfer and part of the LPGA tour then later on a college golf coach. Her dad was a banker. But as a child, even before she could talk, she would hum things all the time. 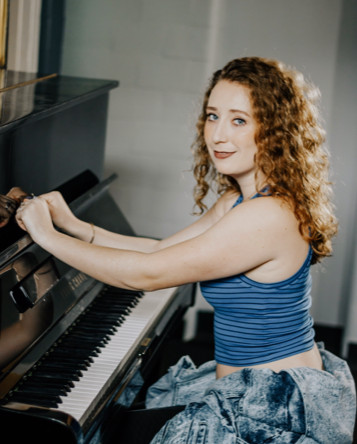 “At the earliest age possible, I was already inclined that way. I started taking piano lessons at age 5 or 6 and I was starting to write songs at that point. But I didn’t know how to spell anything and I remember my piano teacher writing down my lyrics for me,” she recalled.

Her earliest songs were about Jesus, gymnastics, and candy. At the ages of 7, 8, 9 she started writing Christian music and entering contests. Young Anderson started playing at local churches at the same time. Music ministers would meet with her regularly and listen to her songs and taught her song-writing structure. Then she would play her own songs during the offertory. This gave her the belief that she could successfully write songs.

In her teen years, she began writing about boys and love songs.

“I wasn’t really dabbling in country music at that time. I didn’t grow up listening to country music. My parents always had music playing in the house like Carole King and the Doobie Brothers along with gospel and Christian music,” the singer said.

“I really got into Sara Bareilles in middle/high school. So I learned way more on the Sara Bareilles, Carole King side of things and got more into country later on,” Anderson added. Furthermore, she had several bands in high school where she played around Texas in coffee shops and other small venues.

Unlike many I have interviewed, Anderson did not move to Nashville as soon as she graduated high school. She wanted to have the whole college experience and was in no hurry to start her career. She attended Baylor University in Waco where she got a degree in entrepreneurship. However, she did spend every summer interning in Nashville.

Even with the degree, she knew that songwriting was what she was destined to do. She exclaimed, “I always knew I wanted to be a songwriter and it never even crossed my mind to be an artist. I loved writing so songs so much more than I loved performing them. I would sit at the piano for hours and create songs.”

After graduating college, Anderson moved to Nashville where she admits being stressed as she was trying to figure out how to make enough money to survive. A college friend’s family offered to let her live with them for a year while she was trying to make a go of it. That allowed her to only have to have one part-time job as she pursued her dreams of being a full-time songwriter.

One of her part-time jobs was dog-sitting. (She created her own company in 2016, Pup-Stars Pet Services LLC.) Two of the people she sat for were Runaway June’s Jennifer Wayne and Caroline Hobby whose husband in the band, A Thousand Horses. 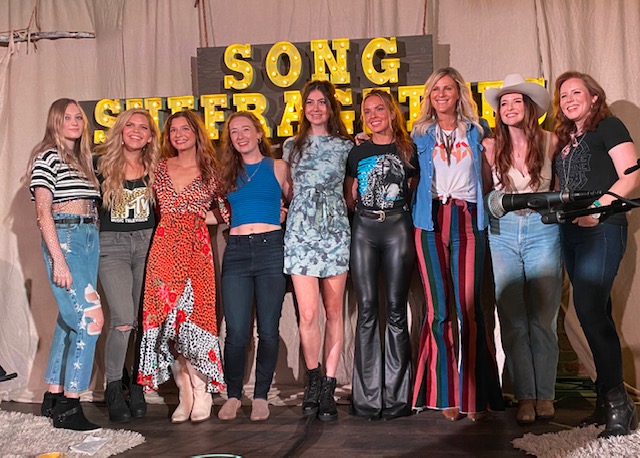 “I dog sat for those girls and other country artists almost every single day for like two years while they were on tour. I lived out of a suitcase and slept in a different bed every week. But that allowed me to write full-time basically and also allowed me to develop a relationship with people who were way far ahead of me [in the music business] and they gave me good advice and connected me with the right people,” Anderson said.

These girls set her up with publishers and Jennifer Wayne introduced her to Catch This Music Publishing Company who was the first publishing company to offer her a deal. Even though the company is no longer in business, it was very important to Anderson’s development and learning how to write a really strong country lyric.

“Because I didn’t grow up listening to country music, I had to play catch up,” she explained.

After they closed down, she signed with Sony Music in 2018.

Since then she was a part of writing Gabby Barrett’s newest hit, “Hall Of Fame” (along with Adam Doleac), and has also written songs for Jaden Hamilton, Levi Hummon, Temecula Road, Walker County, and many more. Due to her unique sound and writing style, she has even dipped her toes in the Sync world in LA with TV and Film.

The lyrics to the sassy song “Shovel” that she composed for Walker County are not what you would expect from the sweet, Texas piano player. Anderson explained, “I like the story aspect of country music so much that I can be ten different people if I want to. I think if I were an artist, I would feel too one dimensional. “Shovel” is not about killing a guy, it’s about the fact that he dug his own hole and she just dug up the dirt on him. Songs like this help you get your angst out.”

Anderson got married in 2018 to a husband who is a mechanical engineer.

“I want to be a well-rounded person. I don’t want to have just one thing that is important in my life,” she said. “My life is more fully lived when there are lots of different things that you can appreciate. Patrick keeps me grounded and well-rounded.”

“It was really special and sentimental to me in a lot of ways. It was my way into the industry. That company has blessed my life and others and given me a lot of great friendships. Several artists that I [dog] sat for, I also write for, and passing that on to another songwriter is also special for me because I know it’s going to enrich her life in the same way,” the Texas native said. “Most of the people who work for the company are songwriters. It’s a way for songwriters to support themselves and organically meet the right people.”

The lyricist wanted me to know that her mom was a huge influence on her life. She was a big part of why she believes in herself. At the time when her mother was a professional golfer and golf coach in the ’70s and ’80s, it wasn’t very common for a woman to make a living in athletics, especially in the male-dominated field of golf. The way she carried herself has helped Anderson as she also walked into the male-dominated roles of singing and songwriting.

Anderson’s goal is never going to be about performing.

“I love my job so much. My goal is to continue to meet artists and help them develop and tell their stories in the most honest and best-crafted way possible. It’s very fulfilling to me. I feel like that’s what the Lord wants me to do,” she said.

Now Anderson is publishing alongside two of her musical heroes, Bareilles and Carole King who are also at Sony Music. It just goes to prove that with the proper training and persistence, you can do anything you set your mind to.