LOUISA, Virginia – At a boisterous campaign rally on the lawn of a local courthouse, Del. Nicholas Freitas (R-Culpeper County) exuded confidence in his ability to win Virginia’s seventh congressional district and reclaim the seat for Republicans.

Freitas is squaring up against incumbent Abigail Spanberger (D-VA-07), who recently became a member of the U.S. House of Representatives in 2019. 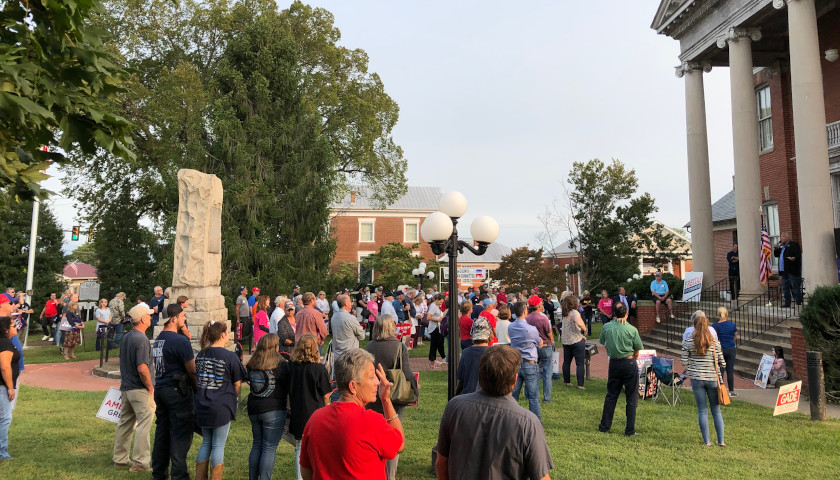 “If you look at what the people of the Seventh District expect out of their government, they want a government that protects their rights, protects their property rights and let’s them live their own lives,” Freitas said in an interview with The Virginia Star.

Freitas continued: “Right now, we have representation that essentially believes the government should be micromanaging everything from our education, our businesses [and] our health care, so it’s the complete opposite of what people thought they were getting when they voted for Abigail Spanberger.”

During the event, Freitas gave a brief yet passionate speech to the group of central Virginians urging them to vote in November, attacking Democrats and stressing the impact the 2020 elections will have on the country.

Many of the people in the crowd were supporters of Freitas and spoke highly of the delegate.

“I’m extremely impressed with Nick, I am,” local resident Virginia Colleen Williams told The Star. “With him being a green beret, I have seen quite a few of his speeches on the [House] floor and have just been really impressed with the way he presents himself, and the way he interprets the constitution is very close to my own interpretation.”

Williams also mentioned that she liked Freitas’ stance on staple policies for conservatives such as the Second Amendment and abortion.

As much as attendees complimented and praised Freitas, they also did not shy away from voicing their disdain for Spanberger.

With only 47 days until Election day, however, Freitas knows he has a shot at beating Spanberger, but cannot become complacent or lazy.

“The biggest reason why I’m confident, [is because Spanberger] will not debate us.”

A source close to the Freitas campaign told The Star that their internal polling numbers showed a four-point swing for Freitas this week, resulting in him leading Spanberger by one point.

The Cook Political Report, an independent, non-partisan newsletter that analyzes elections and campaigns, currently has the congressional race as a Democratic toss-up with a partisan voting index of plus six Republican.

Virginia’s Seventh Congressional District comprises ten counties in central Virginia including the counties of Henrico, Chesterfield, Goochland, Hanover and Louisa, among others.

Early voting for the seventh district elections begins September 20, according to Ballotpedia.