Roughly two-thirds of U.S. residents don’t believe the CDC’s official tally for the number of Covid-19 deaths. This distrust, however, flows in opposing directions. A nationally representative survey conducted by Axios/Ipsos in late July 2020 found that 37% of adults think the real number of C-19 fatalities in the U.S. is lower than reported, while 31% think the true death toll is greater than reported.

The facts show that neither side has an airtight case, but the evidence is more consistent with the theory that less people have died from C-19 than the official figures indicate. Nevertheless, the extent of the possible overcount is unknown, and even if it were as high as 50,000, it would not make a marked difference in key measures of the pandemic’s severity. Hence, debates over the accuracy of the death toll distract from other issues with much greater implications.

The main argument of those who claim that the official C-19 death tally is an undercount is based on a factor called “excess deaths.” This is defined as the total number of deaths from all causes during the pandemic minus the number of deaths that would normally occur at this time of the year.

In the words of the Government Accountability Office, “Examining higher-than-expected deaths from all causes helps to address limitations in the reporting of Covid-19 deaths because the number of total deaths is likely more accurate than the numbers of deaths from specific causes.”

U.S. death certificate data shows that the rise in deaths during the pandemic has indeed been greater than the number of reported C-19 deaths. Some jump to the conclusion that these additional fatalities must be C-19 deaths that were not recorded as such, but a broad array of data indicates that the bulk or all of them are caused by societal reactions to C-19—instead of the disease itself.

For a prime example of how people misconstrue this issue, CNN’s chief media correspondent, Brian Stelter, reported on August 16:

We are likely to see the 170,000 mark crossed today—confirmed deaths from Covid-19. But researchers have looked at the actual number of excess deaths in this country—estimated deaths above the norm—and they say it’s closer to 200,000 so far this year. So the real actual death toll from Covid-19 is around 200,000. We have to constantly remind viewers that it’s even worse than we know. It’s even worse than the data indicate.

First, Stelter is wrong that this figure is for “confirmed” deaths. It is actually for “confirmed” plus “suspected” deaths. Those exact words come from the CDC’s official guidance for certifying C-19 deaths, which was published on April 3. On the same day Stelter made this claim, the CDC’s website stated that its C-19 “case counts and death counts” have included “both confirmed and probable cases and deaths” since April 14. In other words, Stelter misrepresented the essence of the data even though this accounting change was in effect for four full months.

The impact of including probable deaths in the count is evidenced by how the CDC altered its website when it adopted this methodology. Two days after the new method of counting deaths was implemented, the CDC updated its website twice (instead of its usual once-per-day update) to incorporate this revision. The changes it made on that day (April 16) provide a rough sense of scale for how the new policy modified the death toll:

Taken at face value, the second update shows that CDC’s insertion of “probable” cases raised the death count from 26,930 to 31,071, or by 15%. From a more skeptical standpoint, the difference between the 22,871 “confirmed” deaths on the first update and the 31,071 “confirmed and probable” deaths on the second update amounts to a 36% rise caused by these bookkeeping modifications.

More significantly, Stelter failed to reveal that scholars who conduct research on excess deaths have found that multitudes of them have been caused by lockdowns, panic, and other responses to the pandemic. In July 2020, the Journal of the American Medical Association published a paper regarding this matter by researchers from Virginia Commonwealth University and Yale University. An article about the study from Virginia Commonwealth University summarizes its findings and quotes the researchers as follows:

Numerous other facts corroborate the ones above, a small sampling of which includes the following:

Thus, many or all of the excess deaths that Stelter and others attribute to C-19 are caused by the actions of governments and media outlets. These include but are not limited to stay-at-home orders, business shutdowns, and pervasive misinformation that fuels ill-informed decisions, panic, and depression.

Several lines of evidence prove that some deaths included in the official C-19 tally were, in fact, not caused by C-19. However, the combined weight of this evidence is not enough to prove that the reported death toll is significantly greater than the actual one.

Four weeks after the World Health Organization declared C-19 a pandemic, Dr. Deborah Birx, the coordinator of the White House Covid-19 task force, stated that the U.S. is taking a “a very liberal approach” to counting C-19 deaths compared to “some countries.” She then explained that “if someone dies with Covid-19, we are counting that as a Covid-19 death.” Notably, that standard does not distinguish between dying from Covid-19 and dying with Covid-19.

In the wake of Birx’s statement, various government officials revealed exactly how they were implementing this “very liberal approach”:

Short of scrutinizing every alleged C-19 death or a truly representative sample of them, there is no way to tell how many cases like those above are part of the official tally. However, certain evidence suggests they are not a large portion of the total:

On the other hand, the CDC’s guidance and other government policies still incentivize or stack the deck in favor of including C-19 on death certificates. For example:

A breakdown of how many C-19 deaths appear in Part I versus Part II might shed considerable light on the issue of C-19’s lethality. This is because Part I of a death certificate “is for reporting the sequence of conditions that led directly to death,” while Part II is for “other significant conditions that contributed to the death, but are not a part of the sequence of conditions directly leading to the death.” Thus, Just Facts requested such data from the CDC on September 11 and is awaiting a reply.

Media outlets have persistently reported on the number of C-19 deaths while ignoring vital facts that place them in context. A simple example of this is that 2.8 million people die in the U.S. every year, including about 170,000 from accidents. Also of great import, accidents rob an average of 30.6 years of life from each of its victims, as compared to roughly 10.8 years for C-19. Yet in contrast, media outlets don’t continually publicize the running death tally from accidents.

This focus on the raw number of C-19 fatalities—combined with the fact that the very nature of the disease makes these figures uncertain—has spurred controversy over the accuracy of the CDC’s death count. Adding fuel to the fire, the statements and actions of some public officials show clear evidence of overcounting.

But even if the real death toll is 50,000 less than the 200,000 deaths currently reported by the CDC, this 25% difference would have little effect on key measures of the pandemic’s severity.

Consider, for example, the infection fatality rate, which is the portion of people who die after catching the disease. In early March, the World Health Organization announced that “about 3.4% of reported Covid-19 cases have died” and that “by comparison, seasonal flu generally kills far fewer than 1% of those infected.” This 3.4% figure was widely reported, and many media outlets criticized President Trump for saying, “I think the 3.4% is really a false number,” and “I would say the number is way under 1%.”

As it turned out, Trump was correct, and the Center for Evidence-Based Medicine at the University of Oxford now estimates that the infection fatality rate for C-19 is “somewhere between 0.1% and 0.41%.” This is well below 1%, just as Trump stated, and within range of the flu’s infection fatality rate of 0.15%. So even if C-19 deaths are overcounted by 25%, and this exaggerates the fatality rates by the same amount, they would still be 0.1% to 0.3%—or practically unchanged.

Likewise, the CDC’s current best estimates for the infection fatality rate range from 0.003% for people aged 0–19 to 5.4% for people aged 70 and above. Again, a 25% change in these figures would leave them in the same ballpark.

Thus, debates over the death count are a distraction from more informative measures like the odds of dying from C-19 for those who catch it. In this case, the highly publicized figure of 3.4% proved to be off by about a factor of 10. That is a major factor that truly informs the big picture.

From an even broader perspective, the most comprehensive available measure of the threat posed by Covid-19 is the total years of life that it will rob from all people who were alive at the outset of 2020. This crucial measure accounts for the facts that:

In the context of this broad measure, debates over the actual death toll amount to rounding errors in the relative threats posed by Covid-19 and other common scourges that take masses of lives every year: 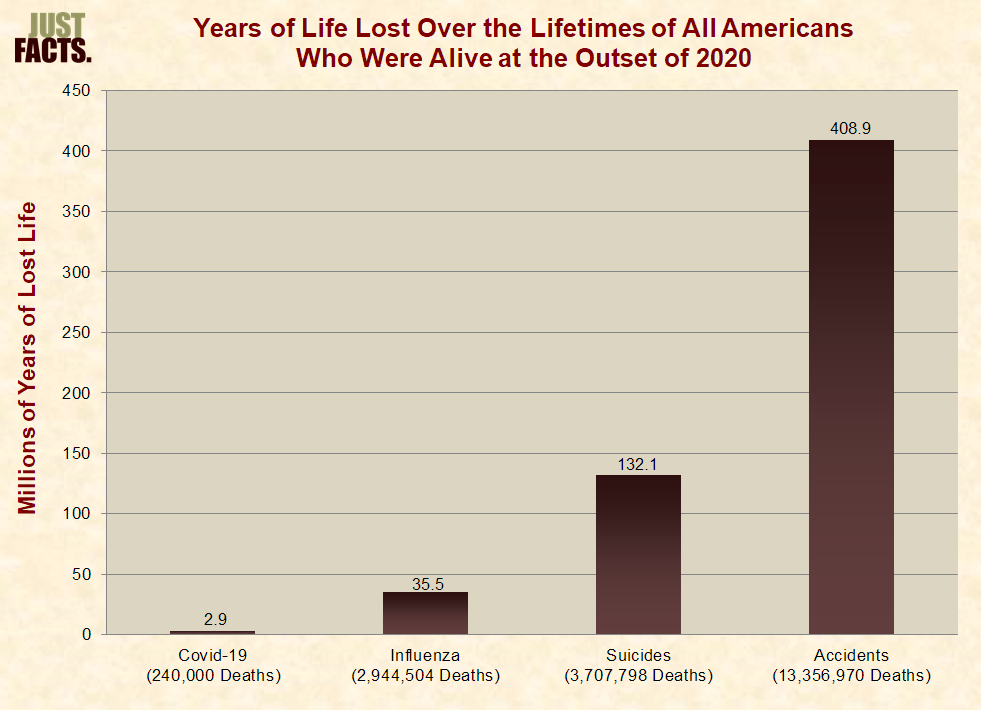 In conclusion, the facts of this matter accord with a Government Accountability Office technology assessment published in July that found: “The extent of any net undercounting or overcounting of Covid-19 deaths is unknown.” More importantly, debates over the accuracy of this figure divert attention from other issues that have much greater implications for understanding the pandemic and how it should be addressed.

2 Thoughts to “Analysis: Is the Official COVID-19 Death Toll Accurate?”