917 Society members gathered at the Elks Lodge in Franklin. 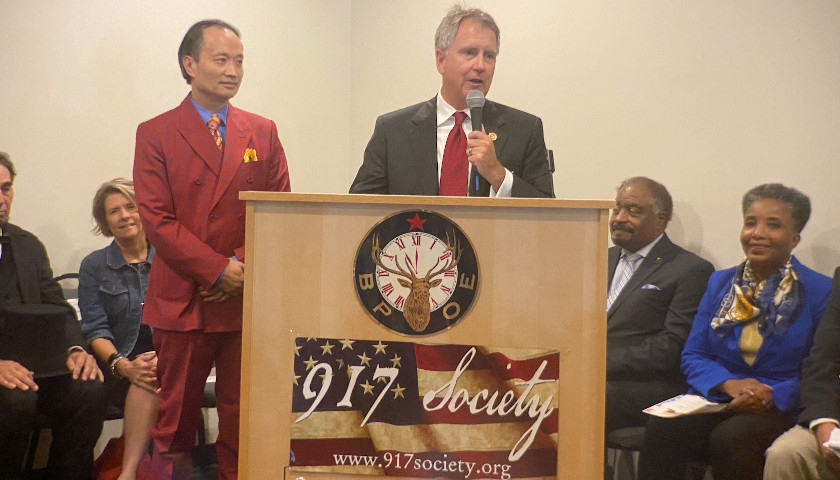 “I know that I’m preaching to the choir, but I am frustrated with a lot of the stuff that’s going on in this country today, and I know that you all probably feel the same way,” Beaman said.

“There’s the lack of respect that we have that’s exhibited in violence and riots against the police, against the military, against the foundations of this country, and tearing statues down,” Beaman said.

Beaman said the people who make up what he called the “Hate America Crowd” worried him, especially since it seemed many Americans share their point of view.

“How did it get this way?” Beaman asked.

“I think that we patriots who love this country have been derelict in our responsibilities.”

Beaman said that people have allowed schools, universities, and elected officials “to go way far afield,” and people who love American need to take more of a stand.

“One of the small things that can mean a lot is if everybody understands the Constitution,” Beaman said.

Nashville physician Ming Wang, who immigrated to the United States from communist China, said that too many Americans “fixate on our differences rather than appreciate what we have in common.”

“When I see these riots, as an immigrant who knows what it is like to not have freedom, I just want to shout at them and say ‘Don’t screw it up. We’ve got it good,’” Wang said.

“This is the best country and such a blessing. Can’t we just protect and appreciate what we have and keep America strong?’”

As reported, because of the 917 Society every eighth-grader in Tennessee gets a copy of the U.S. Constitution — right before they go to high school and about four years before they start voting.

Due to the lack of funding and resources, teachers find it difficult to add one more thing to their classroom agenda. That’s where the 917 Society comes in.

Tennessee is the first state to offer a free state Constitution Day program.