Ohio Department of Health Interim Director Lance Himes signed an order on July 2 that went into effect on July 20. The mandate permits outdoor visitations at senior homes around the state and prohibits indoor visits.

“If you have a loved one and you cannot get into a nursing home, that is the nursing home that is stopping you from going in – it is not the health department” said Ohio Governor Mike DeWine on September 17 during a semiweekly COVID press conference.

The governor was answering a question from Ben Schwartz of WCPO in Cincinnati who was asking on behalf of a viewer.

The viewer’s father is in a nursing home the reporter explained in his background before the question. The seemingly frustrated viewer contacted the Governor’s office and other state agencies several times to no avail.

“Moving forward how will we see rules and guidelines regarding nursing home visitations evolve? And could we expect to see any more lenience on visitations in any way?” was the question Schwartz asked on behalf of the Cincinnati woman.

“We know that winter will come eventually, as much as we don’t want it to come and so now we are working on how visitation can take place inside. If you have a loved one and you cannot get into a nursing home, that is the nursing home that is stopping you from going in – it is not the health department.” – Governor Mike DeWine

The answer caused immediate inquiry from the nursing home industry Governor DeWine’s Press Secretary told a reporter from WMFD-TV and The Ohio Star. 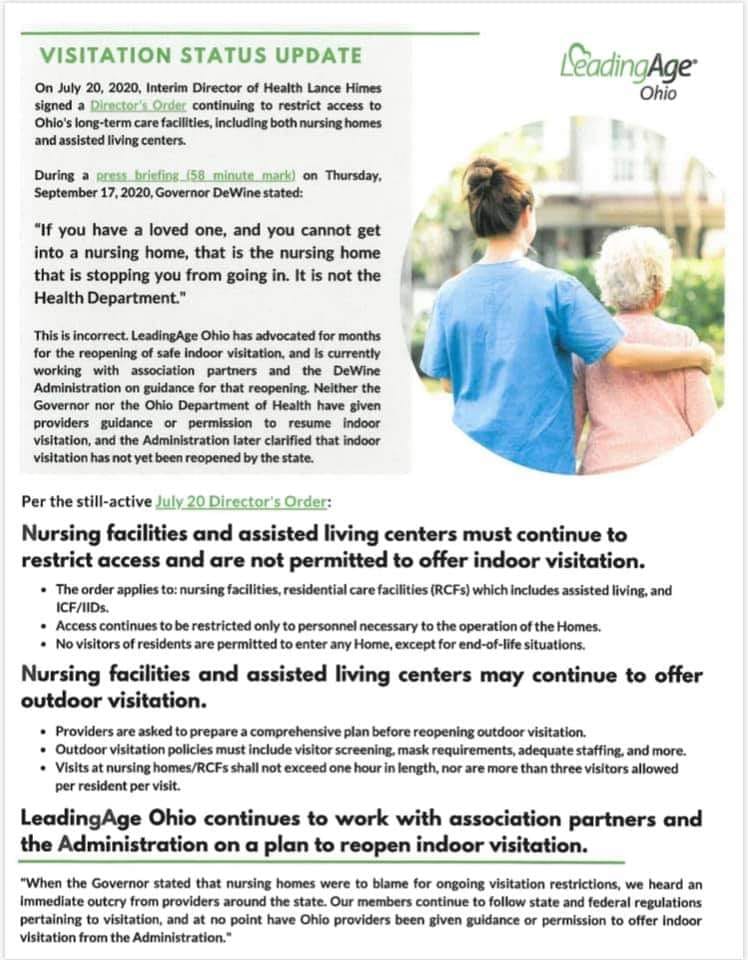 “Hearing that in a speech, I can see how people would take ‘in a nursing home’ to mean indoor visitation. If you have a loved one in a nursing home you can visit them, but there is no in-person visitation right now” said DeWine’s Press Secretary Dan Tierney.

The order declares “[N]o visitors of residents shall be admitted to any Home, except for end of life situations as explained below.”

The exception applies to residents who are near end of life.

“When the Governor stated that nursing homes were to blame for ongoing visitation restrictions, we heard an immediate outcry from providers around the state. Our members continue to follow state and federal regulations pertaining to visitation, and at no point have Ohio providers been given guidance or permission to offer indoor visitation from the Administration.”

With cold weather coming Tierney said “we do intend to put out guidelines for indoor visitation in the coming weeks.”