“They were going to have ‘Black Lives Matter’ painted downtown on Grace Street,” Dickinson said. “So when I saw that, I thought that if we’re going to have an honest conversation about lives and sanctity of lives, then you ought to be honest about it and put ‘Baby Lives Matter’ in front of Planned Parenthood. Because if black lives truly do matter they would be a lot angrier at Planned Parenthood. Planned Parenthood, they kill a lot of babies in general, but especially black babies.” Dickinson is running to represent Richmond’s 1st District on the city council. 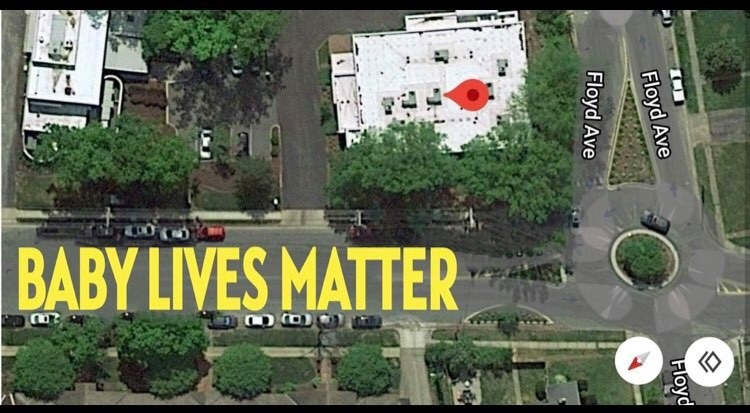 “Venture Richmond has withdrawn the City application for a temporary BLM street mural. We were eager to show support with this mural for the work that has taken place around social justice initiatives, and we remain committed to that,” Deputy Executive Director Anedra Bourne told The Virginia Star in an email on Monday. Venture Richmond is an arts and tourism-focused non-profit that has local businessmen and city politicians on its board.

Dickinson filed his request for a permit on September 1. Seven days later after a closed meeting with city lawyers, the Richmond Planning Commission voted to rescind Venture Richmond’s permit for their mural, according to VPM. On September 18, Venture Richmond retracted their request.

Dickinson told The Virginia Star he spoke with someone on the planning commission about the closed meeting. “They told me that the city attorney was going to stop the Black Lives Matter mural and send it back to them because it was going to open the door for everybody to paint whatever kind of art they wanted to and the city would have to approve it.” Dickinson doesn’t think the city will allow him to paint his mural, but he said, “I’m going to keep on fighting.”

Bourne explained why Venture Richmond canceled its request: “The time that the overall process has taken since our initial efforts in June (including a second consideration by this body [Monday]), combined with the many stipulations attached to such a mural, has lead us to understand that our downtown community is best served by shifting our resources to other areas.”

Bourne added, “We remain eager to carry forth work in the community that supports downtown businesses – especially small businesses – affected by COVID and by a few of the social justice demonstrations. Our number one goal now is to encourage people to come downtown to further patronize our downtown businesses, the great majority of whom remain open and are in need of our support.”

“If you want to go to the SPCA it should have ‘Cat Lives Matter,'” Dickinson added. “It should be open to everybody. And government should not be using the platform of government to push certain views that not everyone agrees with.”