Ohio Republican Governor Mike DeWine enjoyed an 81% approval rating in April for his handling of COVID – the top rating in the country.

By the end of August, DeWine’s rating saw the sixth biggest drop in the U.S. according to The State of the Nation – a 50-State COVID-19 Survey.

DeWine’s approval rating sits at 58 percent with a five-point variance – which means in the worst-case scenario half of Ohioans refuse his handling of COVID.

The governor may still be feeling the high on the unprecedented approval, but last week his name evoked boos from a pro-conservative Ohio crowd being addressed by Vice President Pence.

If the VP Pence gathering get the attention of the governor Monday, he was booed again in Dayton when President Trump mentioned his name at a rally in Vandalia, outside of Dayton, Ohio (see video below).

Earlier in the Trump rally, Lieutenant Governor Jon Husted was warming up the crowd when he was booed heartily, twice – once when he encouraged Trump supporters to don masks with Trump’s name on them and again when he mentioned the Ohio governor and his wife (see video below). 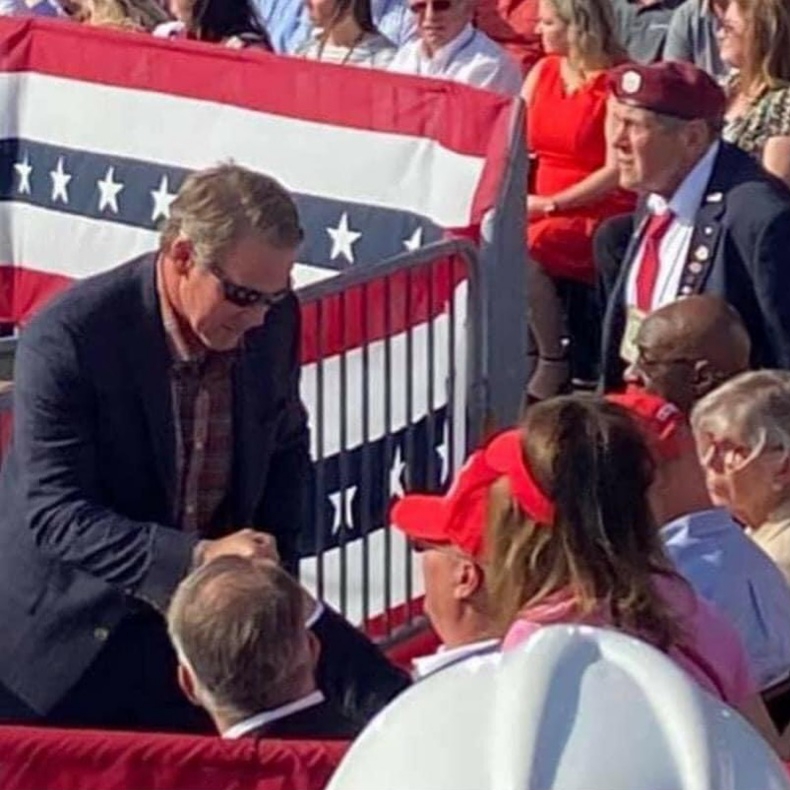 During the semiweekly COVID presser on Tuesday, Husted said of the day, before that, he maintained six feet of distance and wore a mask when appropriate – but the picture (right) shows otherwise.

Boos for Husted seemed to stem from the crowd’s displeasure for mandated mask wearing.

At the Tuesday presser, The Ohio Star asked DeWine about his sinking approval and boos from his own party:

Since a high point of 81 percent in April, your approval rating for handling COVID has seen the sixth biggest drop in the country – as of late August possibly as low as 53% approving – and it continues to drop.

Yesterday Lt. Governor was booed a couple times warming up for President Trump, who later announced your name to a chorus of boos.

Now, obviously this isn’t a popularity contest but given the large number of Ohioans who oppose your direction, the number of judges who have called orders illegal, and the most recent announcement by a Republican representative of a bill that seeks to strike down the state of emergency – as in any war, have you begun to define an exit strategy?

You continue to say that Ohio is open… but businesses are operating at less than 50% and many will not survive, taking health insurance and health security away from thousands of Ohioans.

Since your oath of office compels you to protect our constitutional liberties, not make sure people don’t get sick – what is the metric, not emotion, but metric that will cause you to listen to the growing number of people telling you to change directions?

The full question and answer are contained in the video below.

The Governor said in response that he is used to being booed and that he and his administration continue to rely on the best science and recommendations to drive policies.

In March the state of emergency was declared because the Governor’s experts warned hospitals would be overrun – a phenomenon that never happened.

DeWine said that COVID would be 20 times deadlier than the flu.

#COVID19 is twice as contagious as the flu and 20 times more deadly. #COVID19OhioReady

During a March 27 press conference, then-health director Amy Acton said “[t]here is no health care system in the world that can take on this virus as it was built.  When you talk six- to ten-thousand new cases a day, you can fill ICUs in three days. You could fill hospitals in a week.”

The administration asked for 14 days to “flatten the curve” and give hospitals time to ramp up capacity.

As of September 23, Ohio is entering day 197 under restrictions from Governor DeWine, Lt. Governor Husted and Ohio Department of Health.