NEWPORT NEWS, Virginia – As pounding pop songs played and the crowd cheered, Air Force One rolled up behind the stage. President Donald Trump emerged and waved to the 10,000 people standing on the tarmac in Newport News Friday night. An additional 2,000 people were outside the venue, according to campaign officials. Another 2,000 people were turned away, for a total of 14,000 people – 9,000 more than organizers expected.

“It was amazing, it was astounding, it was mind-blowing,” said attendee Jason McCarter. “I was overwhelmed, words can’t express how it felt, it was just the most amazing feeling I’ve ever felt.” 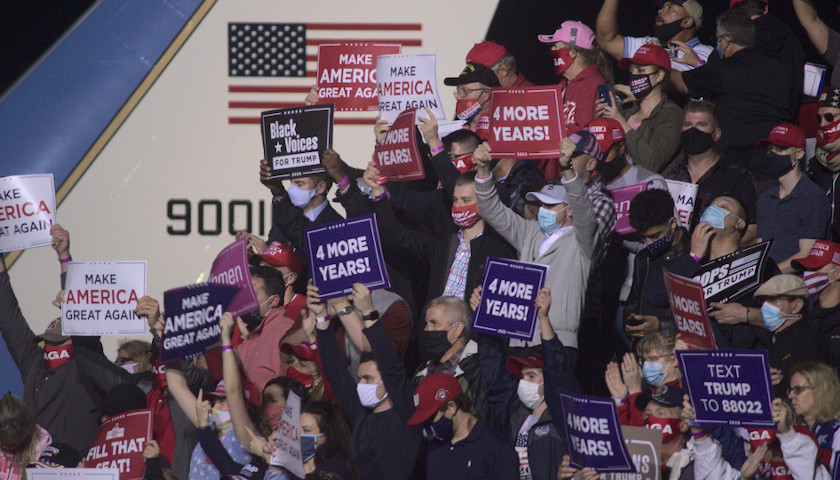 McCarter said it was his first time at a Trump rally, and it exceeded his expectations. “Because of the love, and the atmosphere, and the positivity, it was like a huge aura of good. It was like hope had finally come back, it was so positive and so warm and loving. I was overwhelmed, I was just flabbergasted.”

“Everything he said touched home,” McCarter added. “He’s not a politician. He’s not going to say one thing and go back to Washington and do another. He was a billionaire, he gave up a billionaire’s lifestyle to become a public servant.”

McCarter’s friend Ken Haislip interjected, “I’d vote for a billionaire going into office before I’d vote for someone who wasn’t rich and got rich while they were in office. Trump’s already rich, he doesn’t need their money.” Haislip added, “People always go, ‘Well he doesn’t know how to talk.’ You know what? You show me where it says the president is supposed to be nice and talk nice to everybody. He tells you how it is. He’s a New Yorker. You know, sometimes I don’t like New Yorkers. He tells it straight.”

Attendees Marti and Walt, who requested to not use their last names, couldn’t drive in to the parking areas.  “In coming in, we did get harassed by a bunch of protesters, called some not-nice names. Coming in here, it was great to see the unity and to have that faith again.” 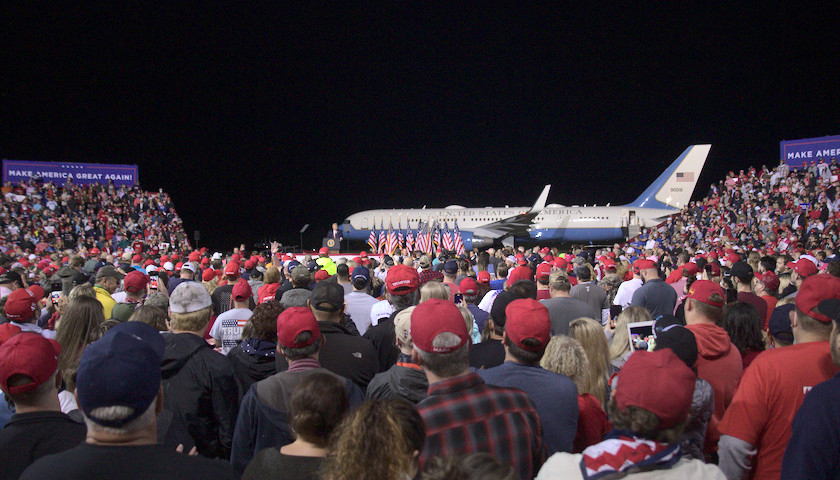 Marti said it was her first time at a Trump rally. “It was like a Lynyrd Skynyrd concert for me. It was fantastic.” She added, “It was inspiring. I was proud to be an American again.” She said Trump didn’t say everything she had hoped, but, “He was great, he was passionate, he cared, and I’m a New Yorker myself and you know he’s from New York. He loves America and he loves Americans and it’s very obvious.”

Debra and Richard Gausman said that although they’re older, they weren’t afraid to attend the rally. “We take care of ourselves. We do have our masks on, a lot of people don’t,” Debra said. Richard added, “There’s been a lot of precautions here tonight. Took our temperatures, there’s sanitation and they’ve been very, very cautious.”

Debra added, “This is a once-in-a-lifetime opportunity. I mean, I got to see the Pope when he was in Denver. And we’re Catholic, and this is right up there. I haven’t seen a president since John Kennedy, and I was a child.”

Before the rally, The Virginia Star interviewed Daisy the Maltese dog, who was present with Carol and Rolf Taylor. Carol Taylor spoke for Daisy. “She likes what Trump has done in terms of increasing the number of jobs, increasing the economy, improving the economy. She knows Trump likes dogs.”

“We’re just trying to support the president and his reelection effort. They do a really good job on the rallies and they’re energetic and hopefully, he’s got the momentum.” Carol Taylor added, “I’ve been listening to [the John Fredericks Radio Show;] he’s even talking about Virginia being possibly being able to turn.”

John Fredericks is the publisher and editor-in-chief of The Virginia Star. He is also a Trump 2020 delegate and the chairman of the Trump Virginia Delegation.