NASHVILLE, Tennessee –  One of my favorite songs in 2018 was “Big Sky” by the Wild Feathers that I first heard on Sirius XM The Highway. This wide-open, simplistic song was an unforgettable anthem that made you want to embrace being alive.

After hearing that song, I didn’t hear from the band again until it came up in my newsfeed that it was releasing a new record called Medium Rarities. I knew then I wanted to find out more about the band.

It turns out they really aren’t a country band per se. Their website describes them as being a blend of Southern rock, Americana roots, and heartland pop. As I talked with frontman Ricky Young, he said “we’ve kind of never really liked to label ourselves. Every listener has an opinion and it just depends on who is listening. So we don’t worry about that. We just make the music that we want to make and that makes us happy.”

Wild Feathers started with three lead singers, Joel King, Taylor Burns, and Young, who played guitar in other bands before starting this one.

“Fortunately, at different times we all felt like we wanted to try something different and new, Young said. “So we came up with the concept of a multiple lead singer group kind of like Crosby, Stills, and Nash. It was actually kind of easy and more importantly, fun.”

They also have guitarist/mandolin player Brett Moore and drummer Ben Dumas who complete the band.

Before they knew it they were talking to records companies. Fast forward eight years they have since released 4 albums filled with genre-less songs covering every imaginable subject.

Recorded in 2013, one of the fan-favorite songs, The Ceiling,” has an Americana vibe with rock and roll sensibility. I wanted to know which songs were included in Young’s favorites. He mentioned, “Every Morning I Quit Drinking,” “Hard Times,” and “American” from the first album.

“It really all depends on which songs are fun to play live. We love what we do so it’s never a chore to play any of them,” the rocker said.

The Wild Feathers write nearly every song and have a huge catalog of music. They are not opposed to doing covers if they make sense but they write so much, they are never lacking in material. 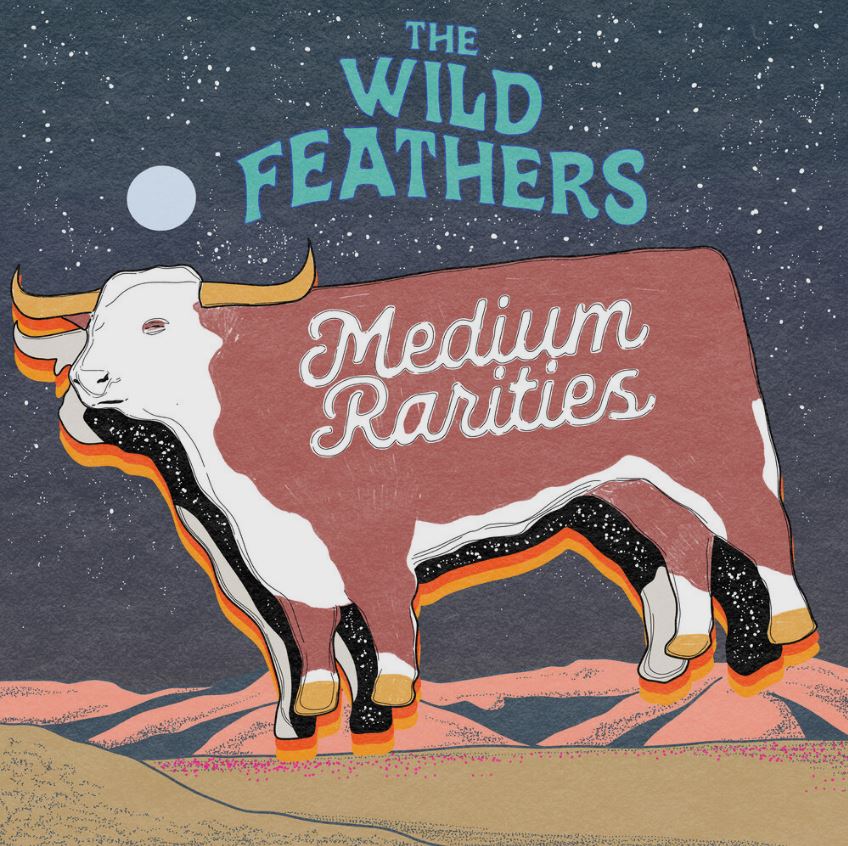 When it comes to writing songs, Young said “melody is by far the first thing that draws me to a song and they just can’t help but pull you in and it’s just effortless. If a melody is good it draws you in and then you pay attention to what the lyrics are.”

With the pandemic and touring virtually being quashed for 2020, as now independent artists, they had the idea to release some of their previously recorded but yet unreleased music. They went through all of their hard drives and found music that they thought would be cool to put out.

For this fifth record, Medium Rarities, they had a lot of material but chose songs kind of made sense together. “We came up with a list of songs that flowed well together,” Young said.

Medium Rarities sounds like a planned-out record, but in fact, was recorded over a broad period of time. The record is composed of those B-sides, covers, demos, and other nuggets Joel King and the band culled from their vault. Since the guys couldn’t initially get together this year to record a new album, this was a way to get new music to their fan base.

One of the few songs they covered early on was the Jayhawks, “Blue,” which can be found on Medium Rarities. The Wild Feathers lend their band’s signature harmonies to this bittersweet song which is reminiscent of tracks by The Band or Tom Petty and the Heartbreakers.

“When you are bored with time on your hands, this gave us a project to do,” Young said. “I think it’s cool that people will get to hear some of the stuff that fell through the cracks and wasn’t right for that time [that it was recorded].”

This indie band has opened for Bob Dylan, Willie Nelson, and the Brothers Osborne along with playing several sold-out shows at the Ryman.

“We’re hoping to get back there sooner than later,” the singer said.

If you like big, eclectic music with no boundaries, the Wild Feathers is the band for you.

Medium Rarities is set for release on November 20 and can be pre-ordered now at this link. A vinyl pressing of Medium Rarities will be available exclusively through Magnolia Record Club now.

The Wild Feathers will finish out 2020 with a handful of live-streaming concerts and private events, including public dates with Blackberry Smoke as well as a handful of headline shows of their own. They’re currently at work on material for a new album and plan to release new music in early 2021.

One Thought to “Music Spotlight: The Wild Feathers”