The “Get Out and Vote” trail made stops in Amelia County and Fluvanna County, following President Trump’s Friday night rally in Newport News.

“This is the ‘jobs’ President. When he cut regulations, when he got the federal government out of the way, we saw an economy that reached historic low unemployment,” Pence stated in his speech at the first event in Amelia. “Joe Biden is weak. Donald Trump is standing up for our country, standing up for our jobs. And he will do it every single day. Peace through strength.” 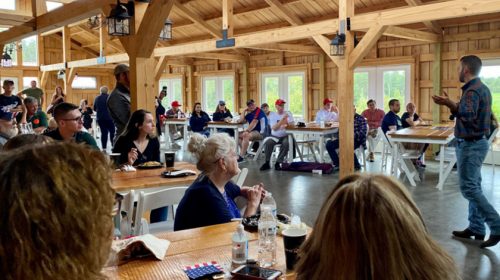 Freitas predicted that his opponent, Congresswoman Abigail Spanberger (D-VA-7), would “drop a ton of attack ads” following their weekend of successful GOP events. The two have yet to debate. Freitas explained to The Virginia Star that Spanberger hasn’t agreed to one.

“I understand why Democrats don’t want to take the stage. Campaigning on a platform of 4 trillion in taxes and funding a Green New Deal – it’s not something you want to have to answer in a debate, especially when people are just trying to get back to work.”

Overall, Freitas described the energy as “incredible” throughout the weekend. Freitas and Spanberger are scheduled to appear in a forum on October 20th.

“I’m just here to ask you to go vote: to go vote for our conservative values, to go vote for what makes this country great,” stated Pence. “And if we do that we can re-elect our president for four more years. In the Pence family, my uncle has always said that he’s Christian, he’s conservative, and he’s Republican – in that order. And that’s how he’s leading this country, this President.”

Pence also emphasized the significance of the turnout at Trump’s rally the night before. The Virginia Star reported that 14,000 people showed up for the rally rather than the expected 5,000. Pence said the numbers reflected Virginians’ awareness that “freedom is up for a vote.”

Pence then shared with the Fluvanna crowd that Trump had officially nominated Amy Coney Barrett to the Supreme Court earlier that day. In the midst of the controversy over Barrett as the next Supreme Court justice, President Trump’s campaign is positioning itself as the ardent defender of the Constitution.

“This is someone that will be the first mother of young children serving on the court. A mother of seven, a Christian woman that is going to keep the Constitution, that is going to interpret the law as written. She’s not going to legislate from the bench, and this President is doing that every day,” Pence stated.

Samantha Cotten, Regional Communications Director for the Trump campaign, affirmed that they have made over two million voter contacts in Virginia. Insider polling for the Trump-Pence campaign classifies Virginia as a potential top-tier battleground state.

Corinne Murdock is a reporter at The Virginia Star and the Star News Network. Follow her latest on Twitter, or email tips to [email protected].