Richland County is teetering on the verge of becoming the first Ohio county to reach code purple on the Ohio Public Health Advisory System (OPHAS).

According to OPHAS,  purple means that the county is experiencing “severe exposure and spread” and residents are to leave home for only “supplies and services.”

During the phone interview with The Star, Humphries anticipates that Richland County will trigger indicators: 1,2,3,4 and 6 – and not triggering indicators 5 and 7.

Whether staying in red or moving to purple matters from a policy perspective is now in question.

During a press conference on Tuesday, Governor Mike DeWine said “going purple has no consequences or sanctions from the state of Ohio. And that’s the same way as being red.”

Consequently, Humphrey said, “Knowing that he will give some latitude will give us some workarounds. Let’s see how we can continue in-person learning.”

“Given what the governor said today during the press conference – businesses, schools, everyone can stay open. Richland County is open for business,” Richland County Commissioner Marilyn John told The Star in an interview.

The Star reached out to DeWine’s Press Secretary Dan Tierney to gain clarity and certainty on what the governor said during the presser. Tierney wrote in a text message response “the advisory system provides guidelines for Ohioans to make decisions based upon the spread in their community.”

“There are currently no state mandates associated with a county reaching purple on the advisory system, although the system advises additional precautions based upon documented community spread and increased health care utilization,” said Tierney.

But getting schools on the same wavelength may be difficult. Back in July the Ohio Education Association (OEA) released a position statement that claimed “under Ohio’s warning system, OEA believes that any school or campus building located in a county designated as Level 4 (purple) or Level 3 (red) must remain closed to in-person instruction.”

Richland County continues to be in code red.  Yet schools were still holding in-person learning.

According to John, several of the county’s school districts were already preparing to transition to a remote learning environment, anticipating that the county would reach the highest level of public emergency on Thursday.

“They are already preparing for the county to go purple on Thursday,” said Whitney Schroeder, a mother to two kids in the Lexington School District in Richland County. “They are sending home assignments and instructions for remote learning.” She continued “they seem to think it’s mandated by the state despite what the Governor said.”

In July when OPHAS was introduced, DeWine said the system was designed as an early warning tool that would allow local leaders to make decisions in their own communities.

John said she was not clear on the county’s updated numbers according to Ohio Department of Health (ODH) despite being in contact with Richland County Public Health and the local health agency’s willingness to provide insight.

Neither the agency nor the commissioner was told what being on the watch list means or the consequences of moving to purple.

The dashboard shows “what is” and does not indicate a high-level public emergency.

OPHAS shows “what if” and has the county on the verge of being the first among 88 to reach the highest level of public emergency – when two-tenths of the population is infected and 14 people are hospitalized in the county.

Since January, 0.08 percent of the entire population has recorded a COVID infection.

Based on The Star’s assessment, the following is how Richland County stands according to the state’s COVID website. 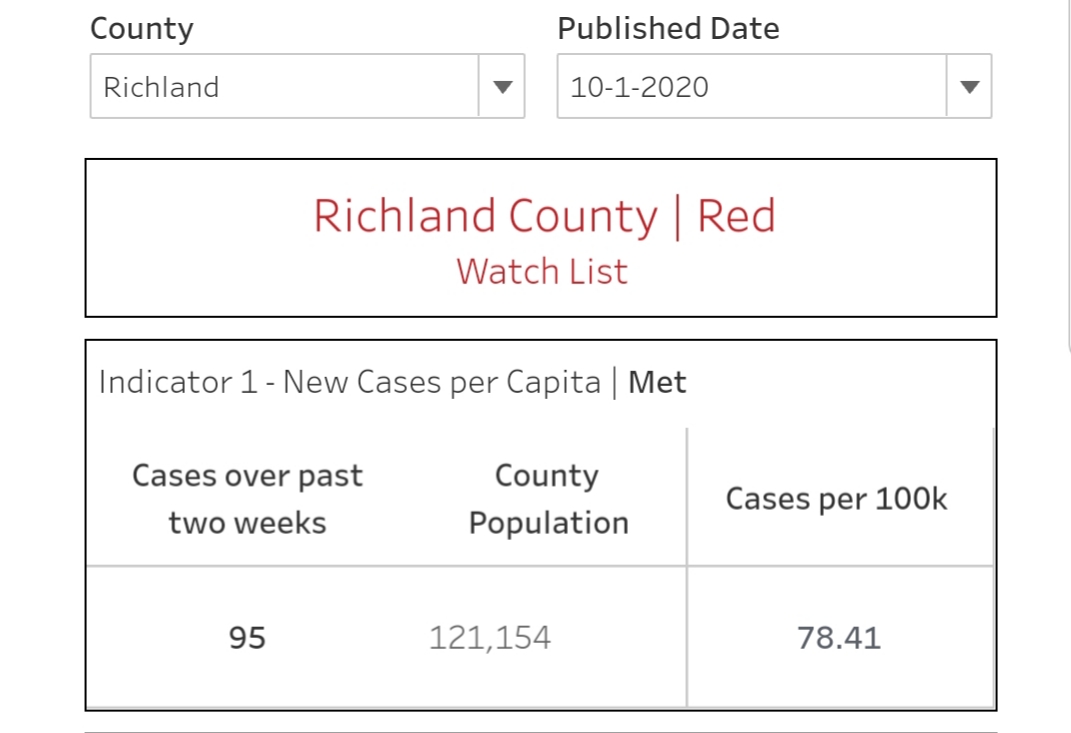 This indicator is flagged if greater than 50 cases per 100,000 residents over the past two weeks.

Richland County triggered this indicator with 95 new cases over the past two weeks to put the per capita ratio at 78 cases per 100,000 residents.

Based on data provided by Richland Public Health (RPH), Indicator 1 will stay triggered as the number will move to the high incidence level at 102.35 cases per capita.

Thus, Richland County will remain in red as long as this indicator stays above the 100 cases per capita level – a spot the CDC deems high incidence.

This indicator is activated if there is an increase in new cases for at least five consecutive days in the last three weeks.

Richland County triggered this indicator from September 20 – September 26, when the 7-day average number of new cases increased from 4.57 to 8.86.

This indicator is turned on if the proportion of cases that are not in a congregate setting goes over 50% in at least one of the last three weeks.

Richland County set off this indicator all the way back between September 9 – 15 when 64% of cases were outside congregated settings.

Since that time (September 16 – 22 and September 23 – 29) the county has been below the 50% threshold but because the indicator weighs a three-week period, it remains triggered almost a month later.

This indicator is ignited if there is an increasing trend of at least 5 consecutive days in the number of visits to the ED for COVID-like illnesses.

The prison population is counted in this indicator even though the prisoners are sent to Columbus to receive care at Ohio State University Medical Center.

Outpatient visits activate the indicator when there is an increasing trend over five consecutive days in the number of people going to a healthcare provider with COVID-like symptoms who receive a confirmed or suspected diagnosis.

Richland County triggered this indicator on September 10 – September 14 when outpatient visits went up from 14.57 to 23.43.

As of October 5, Richland County is sitting at  23.29 and has not experienced a five consecutive day increase since September 10. Consequently, this indicator should move to “not met” if Ohio Department of Health (ODH) data matches Richland Public Health Data.

The Star previously reported how indicator 5 contains data that is not COVID-specific and may be tripped by how a doctor chooses to document patient visits and how medical coders mark visits.

As was highlighted in the report, due to the potential for liability blowback, one emergency room and private practice doctor said physicians will likely record some information in the patient file pertaining to COVID in order to be safe in the future.  That information may be what triggers the visit under this indicator.

This indicator is tripped by an increasing trend of at least 5 consecutive days in the number of new hospitalizations due to COVID over the past 3 weeks.

Richland County triggered this indicator between September 20-28 when the 7-day average rose from 0.29 to 4.0.

According to RPH Commissioner Humphrey on September 30 the county number was 4.7 and then dropped progressively, kicked back up October 2 but dipped again 2.71 on October 5.

This is another indicator the prison population can activate and according to anecdotal information, Humphrey said there was a substantial uptick due to the prison population. The Star learned that Richland County received 37 new prisoners, 25 who ended up testing positive and a number in the “teens” who ended up in both the hospital and emergency department. An incident that may have triggered indicators four and six – despite the fact that the prisoners received care in Franklin County.

This indicator is flagged when the percentage of the occupied ICU beds in each region goes above 80% for at least three days in the last week and more than 20% of ICU beds are being used for COVID.

Richland County has not triggered this indicator and shows not sign of doing so.

The county’s last death associated with COVID was September 10.

Of the 1085 cases recorded in Richland County, 757 have recovered as of October 7.

The data points are already gathered regarding whether Richland County will remain red or be moved by the governor to purple. The Star sent an email to Melanie Amato, press secretary at the Ohio Department of Health to get a final ruling on the matter.

Amato responded, “The Governor will address this at his 2pm press conference tomorrow.”