NASHVILLE, Tennessee – A #WalkAway Campaign event held in Nashville Saturday at Legislative Plaza was every bit as much a Trump Rally, considering the attire of the attendees and their overwhelmingly enthusiastic reactions to mentions of the President.

Despite the downpours caused by tropical storm Delta, about 100 people turned out Saturday afternoon for the #WalkAway Rescue America Rally.

Before the official start of the event, music was playing that attendees danced to, sang along with and intermittently joined in patriotic changes such as U-S-A.

#WalkAway Campaign is a grassroots movement founded in 2018 by a gay former Democrat, Brandon Straka. The campaign was launched with a powerful six-minute YouTube video detailing Straka’s perspective, “Why I Left Liberalism & The Democratic Party.” 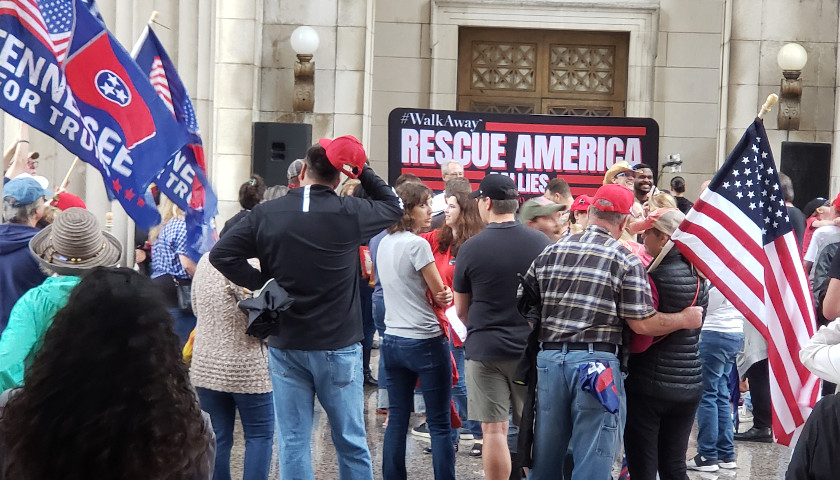 The campaign encourages and supports others to also #WalkAway. Many of its nearly 493,000 Facebook members from all walks of life have shared their own #WalkAway stories.

While Straka voted for Hillary Clinton in 2016 and didn’t start the #WalkAway Campaign to support a particular candidate, he himself supports Donald Trump.

Almost all of the attendees of the event demonstrated their support for President Trump with their red Make America Great Again and Keep America Great hats, various supportive messages on shirts and Trump flags.

Part of Straka’s journey was learning that it is not Donald Trump that is the enemy, but the media.

In fact, as a gay man, Straka learned through his research that Trump supports the LGBT community.

Straka relayed that at a small meet-and-greet with conservative LGBT Republicans the night before that included former openly gay Acting Director of National Intelligence Ric Grenell.  During that event, President Trump called the group.

With a note of sarcasm, Straka told the audience he thought that was weird.  “I thought he was the most anti-gay president that we’ve ever had,” which was met with some boos from attendees.

“So, I thought it was really weird that he called group of gay men to tell us he loved us.  He’s behind us 100 percent,” relayed Straka before his voice was drowned out by cheers and applause.

“When Nancy Pelosi came out and announced she was going to try to push a bill to imply that President Trump is not fit, this is like Days of our Lives.”

Then he went into a call to action regarding the election.

“I went out and early voted,” Straka said, because he is going to be on the road every day until the election.

“We’ve got to go out in person to vote.”

She spoke about her own #WalkAway experience, after having been a Democrat for 20 years in Vermont – home of Bernie Sanders, she pointed out.

As part of the knitting community, Borysenko shared that the bullying by hundreds of people for what she has referred to as innocuous offenses caused one man to have a nervous breakdown and be admitted to the hospital on suicide watch.

An article Borysenko wrote about her experience attending a Trump rally in Manchester, New Hampshire, went viral with three million views in the first week and got her featured on Fox News, Glenn Beck and Dennis Prager among others.

A gay and conservative Trump supporter, David Leatherwood, told the story of how he was fired from his job because of his political beliefs.

After being outed for his then anonymous @realbrokebackpatriot Twitter account, Leatherwood was fired by his employer of four and a half years due to the demands of progressive leftists.

The incident did not hinder Leatherwood’s support for President Trump.  In fact, it was only further validated when Leatherwood received a package from the Trump campaign along with a personalized note which he shared with an emotional reading on social media.

Political commentator Shemeka Michelle opened her remarks by making a jab at Presidential candidate Joe Biden, whom she referred to as “Lyin’ Biden.”

One of Michelle’s encounters with a member of Black Lives Matter was detailed by RedState in August.

As the rally wrapped up, which was a happy and uplifting event, Straka made an exciting announcement to the attendees.

For some time, Straka has been challenging members of the left to participate in a debate.

“The LGBT Throwdown,” as it’s been named, will be held in Fort Lauderdale, Florida on October 16.