Recall efforts have been building this summer and picking up momentum.

One of the organizers of the rally is Matt Brandon, a musician who told The Tennessee Star he earns a “significant portion” of his income from Broadway restaurants and bars.

“We are all struggling,” Brandon said. “ The 11 p.m. curfew is probably the biggest barrier at the moment. That eliminates 33% of the shifts available. And for entertainment venues, that 3rd shift is one of the most lucrative. Getting back to work is necessary. We won’t survive much longer if this keeps up.”

Brandon said that several people and grassroots groups worked together to make the recall effort happen — and they represent a bipartisan effort. 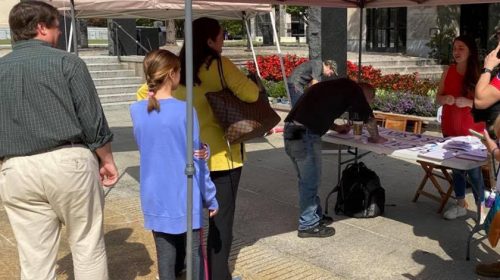 “The political makeup of supporters includes lifelong Democrats as well as Republicans,” Brandon said. “This isn’t an issue of left and right. It is an issue of right and wrong. Mayor Cooper’s policies of continued business-killing curfews and capacity limits despite scientific data supporting reopening do not reflect his promises of ‘data not dates’ and ‘following the science.’”

Brandon said many people are in the same situation he is in.

“Citizens are struggling with lost livelihoods and crushed dreams,” he said. “While this is happening, he has pursued record tax increases that further the burden on citizens while refusing to make reasonable budget cuts. Additionally he has kept our schools closed, despite evidence and recommendation from pediatricians, instead of allowing parents a choice between on-campus and virtual learning. He refuses to listen to the people. This is a man that is drunk with power. He must be recalled.”

Toward that end, recall organizers on Monday morning filed petitions with the county clerk. They now have 30 days to collect about 68,000 signatures to recall Cooper and between 1,000-3,000 for each council member, with the quota depending on the voters in each district.

“We have also reached out to several businesses that will be hosting the petition,” he said. “Those locations will be announced this week.”

Metro Nashville’s own rules make such a recall difficult, Brandon said, but that is not stopping motivated citizens.

“It is a monumental task considering the threshold for recall is actually 3,000 signatures more than the 65,000 votes Cooper received when elected,” he said. “However, we are confident that the voters are ready for an immediate change. People that have never been active in politics are going out of their way to be a part of this because it is personal. We’ve all been affected in some way.”

8 Thoughts to “Recall Cooper Effort is ‘Issue of Right and Wrong,’ Organizer Says”