James Madison University (JMU) Associate Professor of History Mary Gayne tweeted a death wish for the Republican Party. The tweet has since been deleted.

“I’m not linked to a party but, this year, I’m just straight up voting the Democratic ticket. Not even going to think about other variations. The Republican Party can die for all I care. They’ve demonstrated lack of loyalty to democracy & the US Constitution. F*** ’em all.” 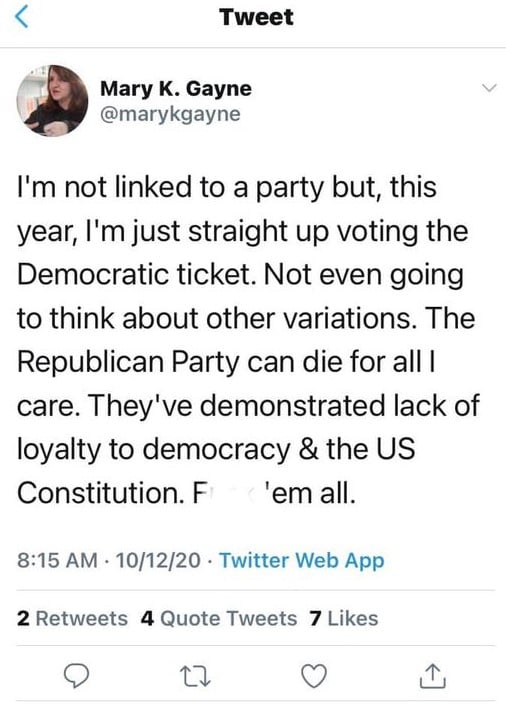 Delegate Kirk Cox (R-Colonial Heights), an alumni of JMU admonished Gayne via Instagram for the content of her message.

“A college professor at a public university can and should have their own political beliefs. They should be allowed to discuss politics in the classroom, particularly in political and social science courses where it plays such a large role. Frankly, students expect political debate. But when our professors – the ones whom many students look up to – decide that those who think differently than they do are not worthy of even voicing their own opinion or in this case even drawing breath, then a line is crossed. Public statements like the one made by Dr. Gayne do not encourage the free flow of ideas and diminish JMU’s standing among her sister institutions in the Commonwealth. Our colleges and universities need to eliminate biases like this in all aspects of university life and encourage open and honest debate.”

Gayne tweeted a response several days later to the coverage of her remarks.

“In a world where I meet with students from my kitchen, I clearly should have treated my personal twitter feed as an assigned text. Mea culpa. VIP Question: Students drive by to North 38. Will they be offended if there’s a BLM sign & no purple/gold mums?”

In a statement, Delegate Cox told The Virginia Star that he doesn’t agree with Gayne’s response.

“As I said in my original social media post, it was unbecoming of the University and wrongfully targeted conservatives. I am not going to suggest the University take any action or call on the professor to be fired. I don’t believe in that kind of cancel culture for these kind of mistakes, though her response certainly lacked the authentic apology the situation merits.”

Cox added that he believes higher education lacks a balance of ideas.

“Whether intentional or not in this instance, I think the left and academia have a pattern of targeting conservatives in an effort to silence and shame any dissenters. And broadly speaking, I think Virginia’s colleges and universities need to do more to ensure a truly open and honest debate on campus that allows conservatives to express their views without fear of targeting or retribution.”