An email from Ohio Department of Health (ODH) Interim Director Lance Himes riled-up Ohioans. The email was sent Tuesday to prospective attendees of an ODH webinar on the state’s vaccine plan.

In the email, Himes wrote, “It is important to note that the Ohio COVID-19 Vaccination Program strategy is a draft framework outlining how to implement mandatory requirements once more details of a vaccine are known.” 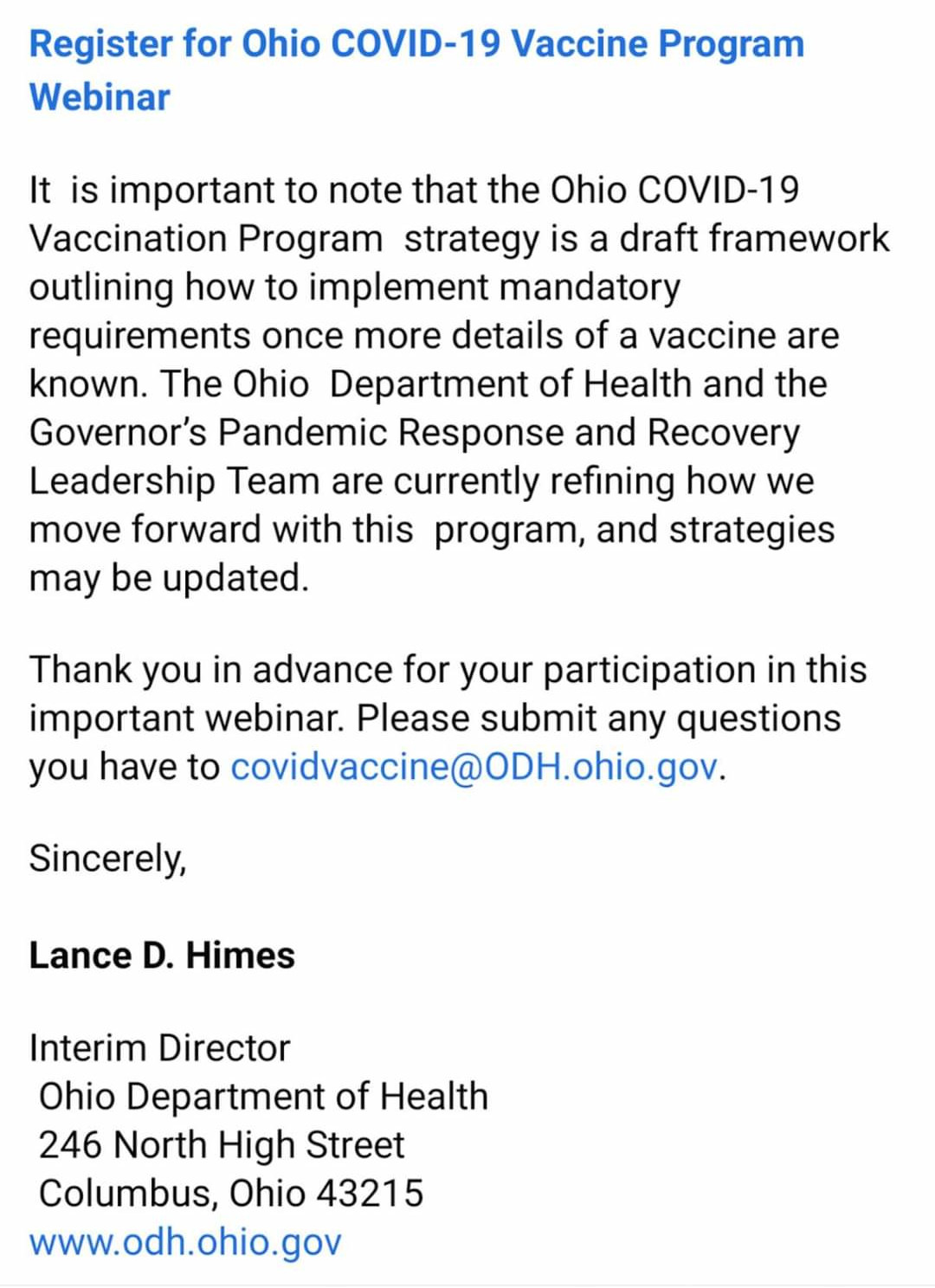 The Ohio Star reached out to the governor’s office, the ODH and Ohio lawmakers seeking insight on the email.

In an emailed response to The Star, ODH Press Secretary Melanie Amato wrote, “The governor or the Ohio Department of Health will not be requiring anyone to get the vaccine. This refers to mandatory requirements for providers who choose to administer the vaccine. Not patients.”

This message is consistent with insight from Ohio State Senator Andrew Brenner(R-19) who told The Star “the ODH liaison said that the mandate is relating to parameters involving those who will administer the vaccine.”

DeWine Press Secretary Dan Tierney echoed Amato and Brenner in a phone interview with The Star, saying “the message is from a webinar for medical providers who will carry the vaccine – for storing safely and administering safely a vaccine that is for those who choose to get it.”

The Star received a copy of the interim draft discussed in Wednesday’s webinar, the 55-page Vaccination Plan can be found here.

Himes’ email seemed to contradict comments made earlier Tuesday by the governor. Consequently, posts to Facebook and Twitter with screengrabs of the email flooded newsfeeds.

Former ODH Health Director Amy Acton said that her dream was to have immunity certificates that would allow people to reclaim their freedoms and be admitted back to “normal life.”  She also indicated the desire to eliminate any exemptions for vaccines.

Dr. Fauci has signaled that the first vaccines may not be highly effective.

So, given the fact that Acton was so adamant, and is still giving this administration insight per your previous comments – two-part question:

1) Is it your position to require vaccination and immunity proof in order to go back to normal life?

2) Or, will you backdoor mandate the vaccine by allowing businesses and schools to shut people out who don’t choose to vaccinate?

The governor started his answer by saying, “Jack, I’m sorry you’re still attacking Dr. Acton. I’m sorry you feel it necessary to do that.” To which The Star reporter responded: “I didn’t attack Dr. Acton, I just indicated what she stated.”

DeWine then went on to say “we’re not going to require anyone to get a vaccine. That’s not going to be any requirement. We hope people will get vaccines.” Then he said that as people see others get the vaccine, hear what the CDC says, watch what the experts say, then people are going to feel very confident about the vaccine.

However, one of the leading COVID vaccines is produce by AstraZeneca who had their vaccine trial paused last month in the U.S. due to an unexplained illness in one of the study volunteers, according to Becker’s Hospital Review. The trial is still on pause.

On Wednesday, The Washington Post reported that a candidate in the AstraZeneca trial in Brazil died, but that the trial volunteer took the placebo instead of the COVID vaccine.

AstraZeneca’s spokesperson said they could not comment on individual cases in an ongoing trial due to regulations.  However, the trial is continuing in Brazil.

DeWine did not say whether he would allow businesses and schools to prohibit attendance for people without a vaccine and/or immunity certificate. The Star sent an additional inquiry to both the governor’s office and ODH and will report back when information is available.

However, Senator Brenner remains concerned the state will mandate a COVID vaccine.

“I am concerned that COVID19 vaccines will eventually become required,” said Brenner. He continued “Because of this, I’m working on legislation that would make vaccinations in adults in Ohio voluntary. Please note, I’m not afraid of vaccines and I’m open to taking them myself, but government should not force people to take them against their will.”

Senate President Larry Obhof was contacted for comment on whether he would support such legislation authored by Brenner. Obhof had not responded by the time this article published.