Several passerby honked their horns and waved to signal their support. 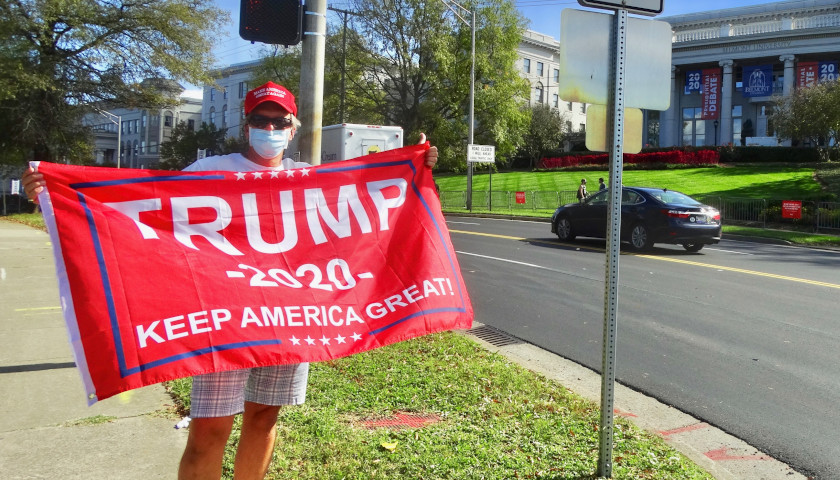 One man, though, rolled down his car window and yelled an angry profanity Huhn’s way.

Huhn told The Tennessee Star that was the first negative comment he and his banner had attracted.

“They have to use profanities and violence. That is why I am here. I want to save our country from the hate and the violence that is precipitated by the liberal left.”

Huhn had planned to visit Nashville two days prior for a personal trip, but that was before he learned U.S. President Donald Trump and former Vice President Joe Biden would debate one another at Belmont Thursday.

Huhn said he rearranged his travel plans so his visit to Nashville would coincide with Trump’s.

One block away, two women who previously did not know one another — one supporting Trump and one supporting Biden — met. They had a civil conversation and became friends, all after one of them, Dorsey Malina, the Biden supporter, had an accident and fell to the ground.

The Trump supporter, Gail Zarr, visiting from Idaho to see her daughter in Nashville, helped Malina up.

“It was divine intervention,” Zarr told The Star.

“This woman didn’t cuss at me when other people were saying F— Trump.”

Malina said she and Zarr share a common humanity.

“When a person is hurting — and this is what I want to see in this country more — someone stepped in to make it right,” Malina said.

But Zarr said not all Trump and Biden voters get along.

“We have lost family members [over politics]. My husband has the most Bible-thumping, guilt-ridden brothers to the most liberal brothers, and the family is totally divided. It’s so sad. That’s not what politics should do,” Zarr said.

“I wish there wasn’t a narrative to push that divide, because I didn’t vote for Trump in 2016. I have always voted third party because I am anti-two-party establishment, but what kind of different world and nation we would be living in if maybe they had given him [Trump] a chance?”

“Can you imagine what better shape our country would be in if people were to rally behind Trump and supported him instead of using COVID-19 as a political issue?” Huhn asked.

“That is what the Left does. They will destroy and burn their own, and they will kill their own to win their political agenda. That is why I am for Donald Trump.”

Zarr said many of Trump’s opponents’ actions are, in the long-term, counter-productive for their own side.

“A lot of his opposition has pushed a lot of people toward Trump,” Zarr said.

“Although I think he’s done a good job, I think he’s going to get a lot more support from people who are voting against the opposition.”

4 Thoughts to “Friendships Made, Some Hostilities Erupt at Belmont Before Thursday’s Presidential Debate”