By noon, the protestors had left. The sign remained on the corner and was tucked into itself, possibly indicating an intent to return later that evening. Police had sectioned off all entrances to campus, including some of the inner roads. Only students and official personnel were allowed on campus. 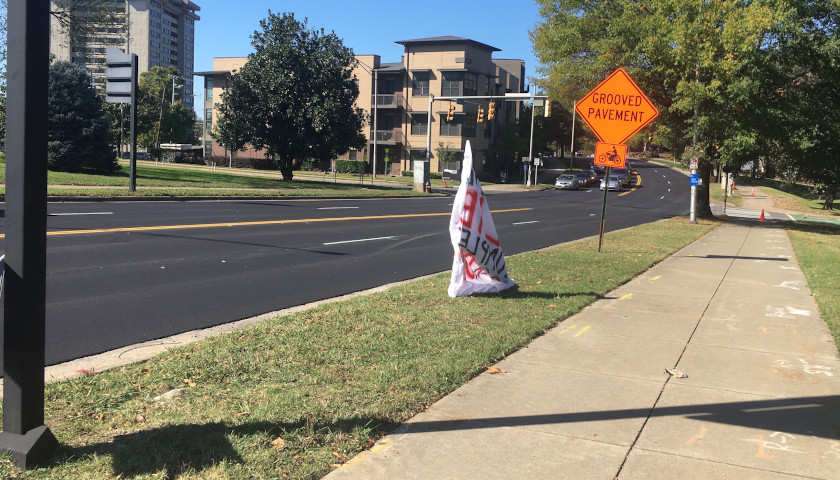 Others had arrived after those first protestors left – reporters, debate attendees, and many supporters of President Trump. One man, Bob Kunst, set up a “Trump 2020” booth about a block down the same stretch of road as the Handmaid’s Tale protestors.

Kunst told The Tennessee Star that he hadn’t seen the protestors or any others all morning. In fact, he reported seeing mostly Trump supporters walking the streets. The closest thing to protesting he’d heard were a few “F*** Trump!” yells from cars driving past.

“I came all the way here from Florida – I’m a registered Democrat, have been all my life, and I’m 78. This is my 192nd effort for the Trump campaign. I’m upset with what’s happened to the Democratic Party. I call ’em ‘Demo-rats.'”

In the apparent minority were Biden supporters. Several students walked by wearing t-shirts promoting justice for Breonna Taylor. One woman walked around with a “Biden-Harris 2020” sign.

No major protests were occurring that afternoon. Pedestrians traveled the streets and campus without any further disruptions.

Corinne Murdock is a reporter at The Tennessee Star and the Star News Network. Follow her latest on Twitter, or email tips to [email protected].
Photo “Handmaid Tales” by WKRN News 2.