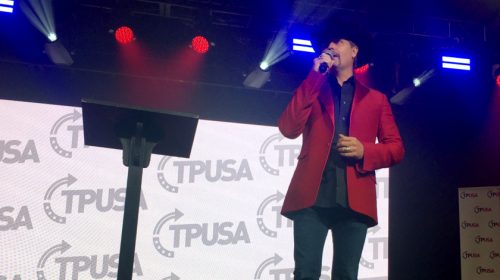 The idea for the event came about three to four weeks ago, according to Turning Point USA Belmont President Jeffrey Seraphine. Ahead of the debate, Seraphine told The Tennessee Star that the speakers volunteered their time when asked.

“This is going to be the largest debate watch party in Nashville at the time. When talking with these speakers, it wasn’t talking to their booking agents or scheduler, it was talking to them directly. We didn’t pay for any of them to come – they came of their own free will. It was extremely generous, and we’re super grateful to all of our speakers.”

Seraphine also told The Star that the event was completely student-led. Prior to the doors opening, masked attendees waited outside in socially-distanced lines. Workers screened each individual’s temperature prior to entry. 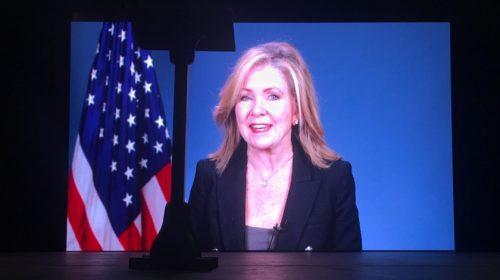 Two food trucks were stationed outside, and several workers ran a coffee shop inside. Once granted entry, attendees could visit either of the two free merchandise booths offering pins, posters, and stickers. Seating rows were distanced, and attendees were required to remain masked at all times.

After the national anthem, U.S. Senator Marsha Blackburn (R-TN) appeared virtually for opening remarks. Blackburn discussed the importance of this election, the nomination of Amy Coney Barrett, and the necessity for young conservatives to play their part in the election.

Rich appeared first onstage, telling attendees to “vote for whoever gives you the best chance of pursuing happiness.” The country singer emphasized the importance of standing by personal beliefs. Much of Rich’s message focused on God and encouraged people to pray for those who persecute their beliefs, not hate them.

“You tell ’em what you think, and you never apologize and never back up. We were built [as a nation] on people who disagree. Debate makes this country great.” 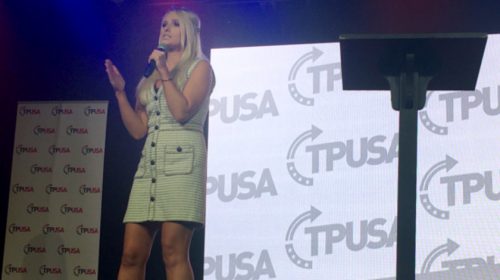 Next up was Lahren emphasizing the necessity of conservatives banding together in order to protect freedoms. She stated that the left doesn’t really want the unintended outcomes of bigger government, saying that “nobody wants to be controlled more.” As to critics calling President Trump’s conduct during the last debate “unpresidential,” Lahren stated that the country had “presidential” for eight years and didn’t get much out of it.

Shackelford then discussed the precedents his legal team has helped win for religious freedoms. He related these court battles to the current struggle between government’s pandemic mandates and the freedom to worship. Shackelford finished his remarks by emphasizing the importance of Amy Coney Barrett’s stance as an originalist.

After, Fournier critiqued Democratic presidential candidate Joe Biden for the Ukrainian emails and attempts to appeal to minority voters. Fournier also listed some of Trump’s accomplishments, including the Platinum Plan with Ice Cube and the millions granted to fighting sex trafficking.

Robinson then appeared to recount her abortion experience and how her subsequent therapy inspired her to engage in pro-life advocacy. She emphasized the fact that the abortion industry is a multi-billion-dollar business. 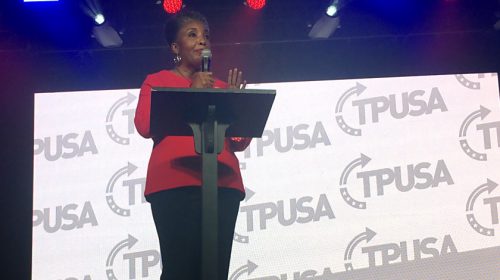 Next Dr. Wang offered some insight about the progressive voting tendencies of minority voters in the country. Wang challenged the attendees to find common ground with minorities. The doctor shared that minority voters would become the majority in less than a decade, so they are the bigger priority for conservative outreach.

Dr. Swain appeared last, calling herself “a product of the American dream.” She stated that critical race theory is racist because it holds minorities back under the guise of diversity, equity, and inclusion. Swain also encouraged conservatives to conduct greater outreach to minority voters.

Final pre-debate remarks came from UFC fighter Michael Chandler, who encouraged the attendees to go out and vote.

Attendees watched the debate from either the main screening room or the adjacent coffee shop. Once the debate finished, event workers and security guided all guests out of the building.