The U.S. Senate confirmed Amy Coney Barrett to be an associate justice on the nation’s highest court Monday.

Barrett fills the vacancy of the late Supreme Court Justice Ruth Bader Ginsburg, who died in September at the age of 87 from complications of metastatic pancreatic cancer.

The Senate approved Barrett in a 52-48 vote Monday evening after a full day of final arguments in the upper chamber.

Barrett, who was a Notre Dame University law professor before becoming a judge for the 7th U.S. Circuit Court of Appeals in 2017, gives Republicans a 6-3 majority on the Supreme Court. She also is the third judge selected to the court by President Donald Trump, who also chose Justices Neil Gorsuch and Brett Kavanaugh. 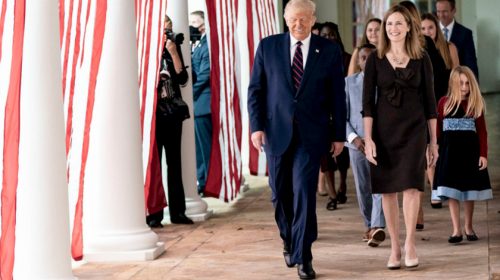 Throughout Barrett’s confirmation process, Democrats said the seat should go unfilled until after the Nov. 3 election, leveling the selection was otherwise illegitimate. They also accused Republicans of wanting to use the court to overturn the Affordable Care Act and gut Roe v. Wade, the landmark abortion ruling.

Democrats also pointed to former President Barack Obama’s nomination of Merrick Garland to the court leading up to the 2016 election as an example of Republicans’ hypocrisy. Garland was nominated in March 2016 after Justice Antonin Scalia’s death, but he did not receive a hearing in the Republican-controlled Senate.

Republican and Democratic senators had one last chance to make their cases on the Senate floor Monday ahead of the final vote.

“Perhaps most important, [Barrett] is a woman of unquestionable character and integrity, the presence of which is essential to our nation, as the confidence of the court itself is in the balance,” Sen. Mitt Romney, R-Utah, said Monday morning.

“This rushed Supreme Court nomination not only ignores Americans’ demand for help at a time of maximum need, it is done in a way that will likely increase their suffering,” said Sen. Tim Kaine, D-Va., referencing the COVID-19 pandemic and a potential Affordable Care Act ruling.

Derek Draplin is a regional editor at The Center Square. He previously worked as an opinion producer at Forbes, and as a reporter at Michigan Capitol Confidential and The Detroit News. He’s also an editor at The Daily Caller.