Virginia Democrats filed suit against the Richmond General Registrar on Monday for not providing records of voters with invalid absentee ballots due to errors or omissions, which they say prevents the Party from notifying and assisting voters in fixing their ballots before next Friday’s noon deadline.

The complaint was filed by attorneys for Susan Swecker, chairwoman of the Democratic Party of Virginia (DPV), in Richmond Circuit Court, seeking injunctive relief and to petition for a Writ of Mandamus to make J. Kirk Showalter, Richmond’s registrar, comply with the records request.

According to the complaint, Swecker requested a copy of documents that list voters whose absentee ballots were rejected, only asking for those voters’ names, their nine-digit voter identification number and the nature of the mistakes or omissions. All other voter information, like social security numbers, was asked to be left out.

Included within the complaint are screenshots of emails between Showalter and Swecker as well as her attorney. 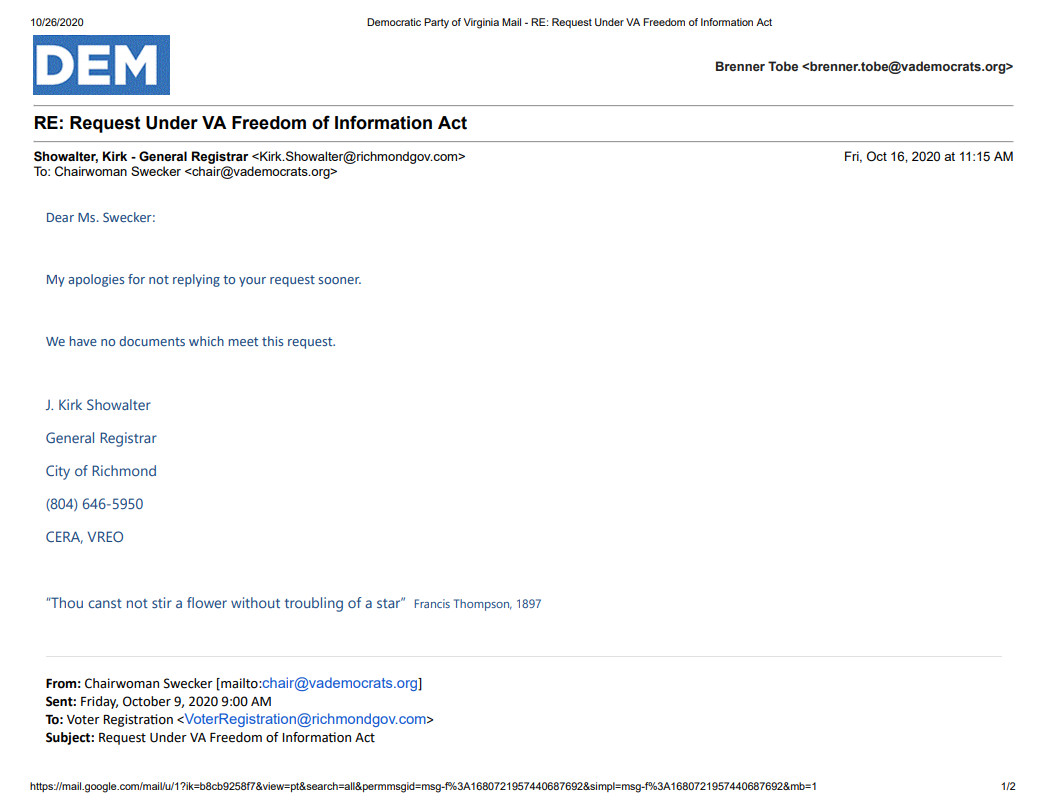 One screengrab (right) is of Showalter telling Swecker that there are no documents which meet the request on the last day of the statutory response deadline under the Freedom of Information Act (FOIA). Another screenshot is of Showalter producing a limited list of voters 17 days after the original request, which she described as not current, according to the complaint.

The Virginia Star contacted Showalter asking for comment on the lawsuit. She replied, “We cannot comment on any matters related to pending litigation.”

Swecker and the DPV argue in their complaint that if they do not receive the list of voters fully complying with the request, its organizational efforts to help Virginians correct their ballots and ensure their vote counts will be harmed, and that voters themselves will be disenfranchised.

Furthermore, Swecker asserts that registrars in other cities and counties throughout Virginia have complied and produced the same records.

“Here is the challenge: this list that [Swecker] is referring to is a brand new thing that has never existed before,” Chris Marston, general counsel for the Republican Party of Virginia, said in an interview with The Star. “This is the first election in which Viginia has had what we call an ‘absentee cure process,’ as in a voter is allowed to cure a mistake they make.”

Marston also said that in other states with a ballot curing process, political parties and campaigns do try to help voters correct mistakes or omissions in an effort to ensure their supporters’ votes are counted.

The Star made several attempts to contact Swecker and the DPV for comment on the lawsuit, but did not get a response before press time.

As of Tuesday evening, it is not clear when a hearing will be scheduled to resolve this dispute.

Under changes made to state election laws by the Virginia General Assembly during its special session, voters are entitled to correcting mistakes or omissions on their absentee ballots before noon on the third day after the election, which includes the general registrar issuing a new ballot if necessary and holding onto the invalid ballot.

The changes also call for the general registrar to notify a voter via phone, email or in writing within three days of finding an error or omission on their ballot.

According to early voting data from the Virginia Public Access Project, with only six days until the election over two million Virginians have already voted, through mail or in-person, since September 18 and 347,352 mail ballot applications have yet to be returned to registrars.

Jacob Taylor is a reporter at The Virginia Star and the Star News Digital Network. Follow Jacob on Twitter. Email tips to [email protected]
Photo “People Voting” by Wyofile Wyofile. CC BY 2.0.