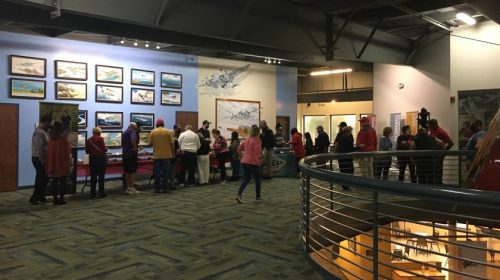 Kiggans gave the opening prayer, followed by Curtis leading the Pledge of Allegiance and Cosgrove singing The Star-Spangled Banner.

Prior to each speaker, Fredericks would give introductions and share data from President Donald Trump’s campaign. Fredericks shared that the Trump campaign knocked on approximately 3.2 million doors this past weekend. He also predicted that Trump would win Florida and Texas by six or seven points, Georgia by three points, and overall wins in North Carolina, Arizona, and Iowa. 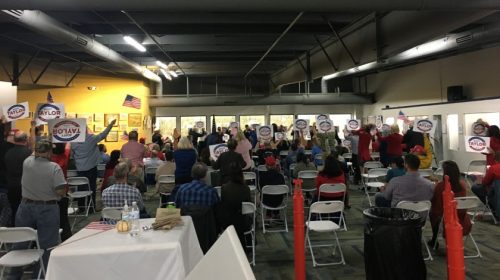 “The number of people we have at these rallies surpasses anything I ever saw in 2016,” stated Fredericks. “Tuesday night at 11:30 Trump will declare victory!”

As the first speaker, Dyer emphasized the strength of Virginia Beach citizens. The mayor commended the guests for showing up on a rainy day, and Virginia Beach police for being an excellent force that is the “envy of the country.” He remarked that the outcome of this election will reflect our country’s character.

“We are based on a Constitution and a will and a desire to be the best nation ever.”

After Dyer, Miyares juxtapose American values with failed socioeconomic policies. He specifically reflected on socialism’s failings throughout history. The delegate also contrasted Democratic presidential candidate Joe Biden’s foreign policy record with President Donald Trump’s. Miyares concluded that “America First” mindset starts at the top but needs to work all the way down the bottom of the ballot.

Then, Davis appeared to commend the museum’s founder, Gerald Yagen, for allowing the rally to occur. Once the applause died down, Davis shifted to policy. He stated that the bills passed this year are “an attack on common sense and reasonableness.” Davis added that the Democrats are attempting to make certain nonpartisan positions into partisan ones.

“If they make it partisan, our values will win,” Davis promised. “Our party will win.”

After Davis, Wendy Gade incited laughter from the audience after she addressed them as “adorable deplorables.” Her tone sobered as she shared Daniel’s story of losing his leg in Iraq. She asserted that the sailors and marines that unquestioningly gave their blood were a true reflection of American spirit. Gade finished her speech by predicting wins for both Trump and her husband. 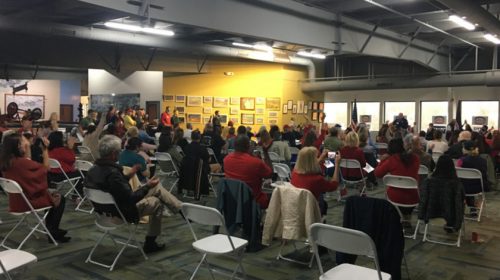 “Virginia is going to be that firewall. I believe Trump is going to win Virginia. I believe Gade will win the seat, and I believe he will bring back American values to the U.S. Senate.”

Following Wendy, Taylor took a moment to compliment all the event organizers and each featured guest for their dedication and work throughout the election season. The candidate also reviewed key aspects to Trump’s reputation for “promises made, promises kept,” including implementing tax reliefs, standing up to China, and moving the embassy to Jerusalem.

“Every revered president was controversial in their time,” assessed Taylor. “History will look very kindly upon President Trump.”

Taylor also discussed his sponsorship of the Ashanti Alert Act, which implemented a nationwide alert system for missing adults. Taylor concluded with a reference to his opponent, in which he reminded the audience of attempts by Representative Elaine Luria (D-VA-02) to use taxpayer dollars for a trip with Speaker of the House Nancy Pelosi (D-CA-12) during last year’s government shutdowns.

In an interview with The Star, Taylor said that he felt fantastic going into Tuesday. He shared that internal modeling reflects wins earned through in-person voting. 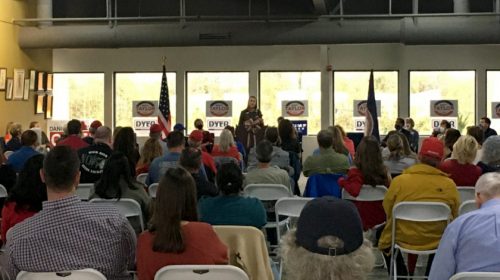 “The feedback on the ground, all the information we’re getting, is very, very good. I’ve talked with, I don’t know, ten thousand people, and I’ve had a lot of conversations about the congressional race. Law and order, taxes, and the economy are a big deal.”

The rally concluded with final remarks from Anderson. The attorney complimented their spirit of service they carry throughout their campaigns.

Anderson shared with The Star that the event went well, judging by the size and enthusiasm of the crowd.

“I think that the crowd and the elected were excited. You could feel the energy in the room. And the best part is: nothing bad happened. No drama. It was just people here to be encouraged by the candidates and get excited about Tuesday.”

Today at 6:00 pm EST, Anderson will host another rally in Richmond at The Great American Ranch.