Hagerty held the conference, before election results arrived, in front of the Brenthaven Cumberland Presbyterian Church.

Madisen Keavy, with the Knoxville-based WATE, asked Hagerty to “address voters’ concerns that if President Trump does not win tonight that he may not leave the White House as the law says.” 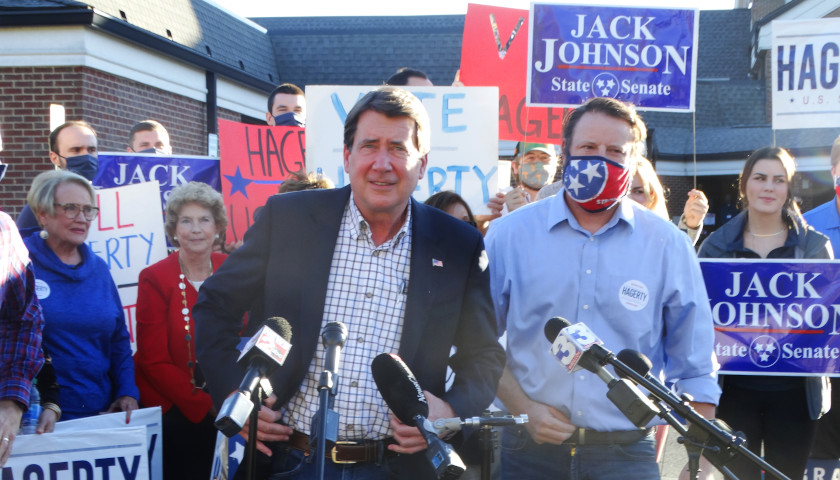 Hagerty said he felt certain in a positive result and felt great about his own race.

“One vote is the rule in America,” Hagerty said.

“I am certain he [Trump] will accept the results.”

Earlier, Hagerty said he felt “honored to have the support of so many Tennesseans.”

“We are reaching out not only to Republicans but to independents, Democrats, all Tennesseans,” Hagerty said.

“I want to be the best representative I can possibly be of Tennessee conservative values in the United States Senate.”

But that didn’t stop Tennessean reporter Natalie Allison from asking this:

“Throughout the campaign, and [given] what you had to do to get here, you have had to use a lot of divisive rhetoric. Our country is very polarized. What do you plan on doing once you are elected, and do you plan on making attempts to try to unite Republicans and Democrats?”

“I have been reaching out over the course of this general election to Republicans, to independents, and to Democrats. Everybody is concerned about seeing our nation turn toward prosperity again,” Hagerty said.

“Our state is one of the best positioned states in the nation, and I think a good job remedies so many social ills so I look forward to working with every Tennessean to the best of my ability.”

“My question to her was ‘What divisive language?’ I wanted her to give me an example of it because I hadn’t heard it,” Swain told The Tennessee Star.

“I think it is ridiculous given that the Democrats never accepted the outcome of the 2016 election, and they are worried about what Trump will do if he loses,” Swain said.

Swain said Hagerty has a statesman-like temperament and that Allison asked an inappropriate question, especially given how Hagerty has conducted himself during his campaign.