When I saw/heard David Phillips’ (aka wino-strut) video for his newest single, “Natural Home” I knew this was someone I wanted to interview. The song had an interesting, old school sound that I wasn’t quite sure if it was Americana, Outlaw Country, or Rock’n’roll.

What I didn’t realize was that Phillips is a renowned expressionist American painter. He is a unique, non-commercial aesthetic artist with unrivaled natural talent. Conversely, music was something in his spare time he did when the oil paint was drying. 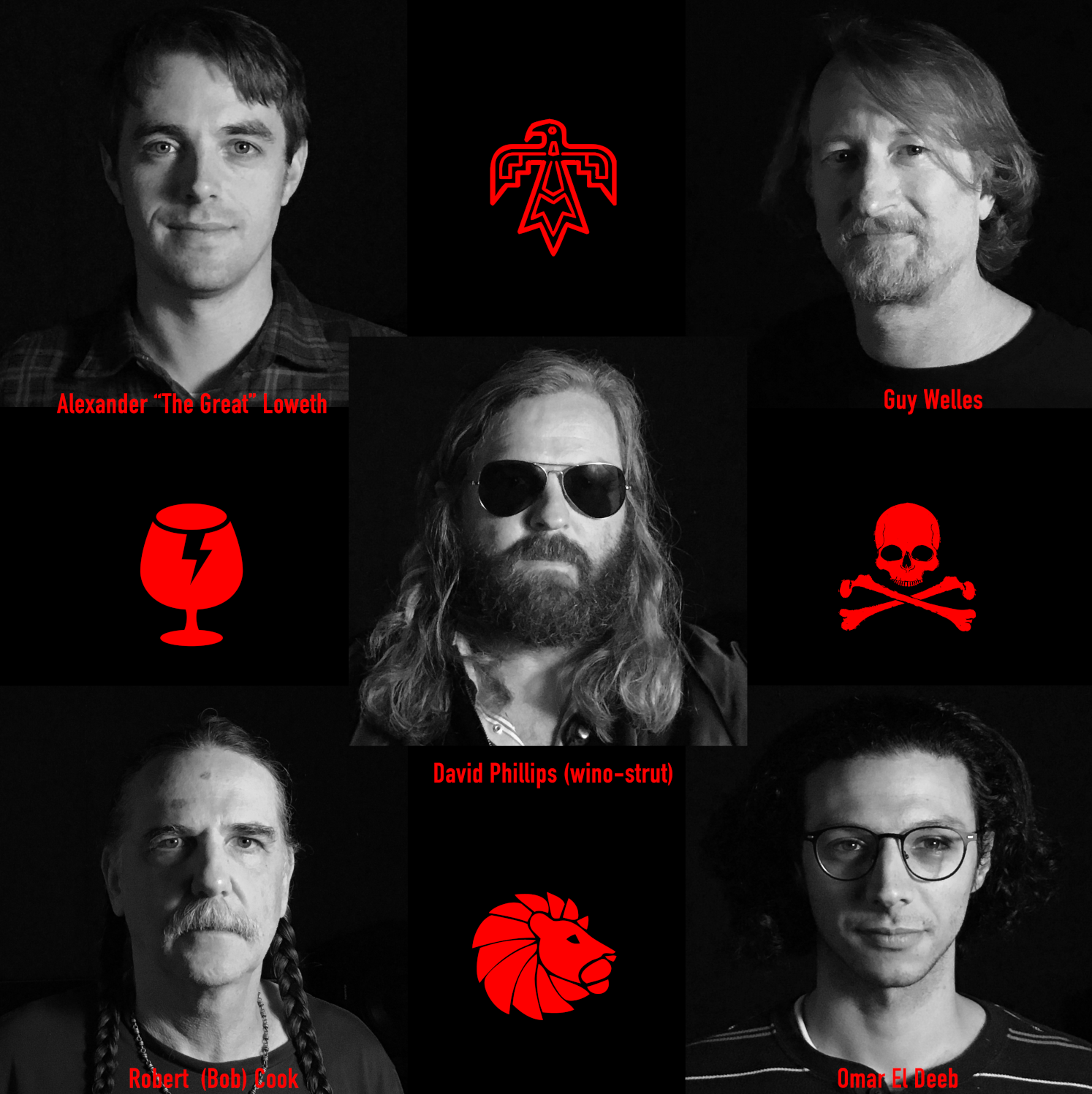 Phillips was raised in two towns in Oklahoma, Tulsa and an Indian reservation town called Nowata. His mother was a single mom and raised him and his two brothers alongside their grandmother. His grandmother was an oil painter and when he and his brothers would get in trouble, she would separate them into three rooms. The room Phillips got put in was the art studio and painting was his punishment. She would critique his work and offer advice.

He did it so much that he got good at drawing and became the kid at school who could draw and paint. When he was around 14, he started painting animals that he saw on the reservation. He painted and a deer and his grandmother took it to her framer. It was so good that the framer thought the grandmother had done it. He framed it for free and the story got around that a 14-year-old had painted it and someone purchased the painting for $300. Phillips realized then he could make money selling artwork.

After he sold a few paintings, he bought a guitar. When he painted, he always had music on.

“Luckily, my grandmother likes good music. I was raised on Chuck Berry, Elvis, and even the blues bands like Muddy Waters,” Phillips said.

He played in some bands in high school, but visual art was always his main passion and he went to art school after graduation. At age 21, Phillips booked a visual arts show in Los Angeles. He loaded up his old car with art supplies, a bag of clothes for the weekend, and his guitar. He drove from Oklahoma to Los Angeles to attend the art show. He knew one person in LA and asked them if they wanted to go to an art show and could he crash on their couch.

That person lived in Venice Beach and he fell in love with the area. He was able to sell his abstract painting for a lot more money than it would have fetched in Oklahoma. He got an odd job as a production assistant that he had for six years. That allowed him to get an art studio in Venice Beach which at that time was not the trendy location it is now.

Phillips literally wrote songs and played guitar while his oil paintings dried. He tried being in a band in LA but as Phillips described, “It was next to impossible. Everyone wants to be the lead singer and the main guitar player. Everyone wants to be famous. Even though I was the frontman of the band, I always did it for fun.”

It took him a lot of years, but when egos got in the way, he finally quit trying to have a band. He decided to go solo and only play with friends. Hence the band name: wino-strut and Friends. He explained, “I finally gave up on all that and said, ‘I don’t care what happens anymore, I am doing this for fun.’”

Phillips’ next-door neighbor, Bob Cook, who is a film director, played every instrument so he approached him and asked, “Let’s start a band and if anything gets weird, let’s just stop it.”

They started meeting up every Tuesday night. Then they added new members and had no road map and it started being more like a party. Phillips wrote songs, but if someone else had something they wanted to play, they played it.

This was 15 years after living in LA and their party band started sounding pretty good and they got offers to play in clubs. If they got a gig, they would only do it if it was fun. They didn’t care about getting paid or if it was a packed room as long as it had a good vibe.

“Us having fun on stage translated to access to everything, to our music, to our fans and even us getting a label,” he said.

They rented an Airbnb, invited their families, partied at night and recorded in the day. Most of the tracks were recorded to tape (as opposed to digital) live with a very exile main street Rolling Stones kind of vibe. What resulted was the first full-length LP, Bloodsicle, which was released on October 30 of this year.

Initially, they couldn’t decide whether or not to release new music since they wouldn’t be able to tour with it. But as Phillips said, “Everything about this year has been so absurd anyway, and it was fun making the record. However, we did hit a lot of snafus but it became funny because there so were so many. But I like the struggle with art. It shouldn’t be glossy and easy.”

They were fortunate to have famed percussionist Ms. Bobbye Hall (Bob Dylan / Janis Joplin / Bill Withers) play on two of the songs on Bloodsicle including the latest release “Natural Home.”

“[Hall’s] a human metronome with the rhythm. It’s insane,” the singer said.

It turns out that bandmate and director, Bob Cook was shooting a documentary on Hall. He had forgotten about his Tuesday night gig with wino-strut. Cook told Hall, “I’ve got to go to practice.” Hall wanted to hear the band and when she heard them, she said, “I want to play.”

The forty-year-old has been an artist in LA for 21 years and has the luxury of making good music as a side endeavor. Phillips’ newest music, Bloodsicle, mainly nods to its roots rock, along with some cosmic country while being slightly psychedelic. The music, along with their lifestyle, is a throwback to the 60s and 70s.

Though they have songs available to buy/stream, they are truly a live band and their music was meant to be consumed that way.

Wino-strut and Friends plan to tour all over whenever things get back normal. Phillips exclaimed, “All this is going to pass. We’re not putting a date on it or a year on it but we are trying to stay positive. What a giant party it’s going to be when everyone gets back together.”