A poll worker who checked in voters at the Radnor Municipal Building located in Delaware County, Pennsylvania’s Sixth Ward – about 13 miles outside of Philadelphia – said Election Day last Tuesday was “total chaos.”

The worker, who we will call Sue (to protect her identity and safety), said that she worked the greater Philly area polling precinct in 2016 and never saw what she witnessed in droves on election day 2020.

People were angry, according to the election volunteer.

Pennsylvania law is vague on the issue of apparel – it prohibits electioneering and soliciting votes but not wearing garments in support of a candidate.

“A man wearing a MAGA hat had to take his hat off and another person had to turn a Trump shirt inside out. But people who had BLM masks, shirts, hats – no one said anything to them.”

BLM supports the Biden and Harris Campaign and is strongly associated with the Democratic party.

Sue estimated one-in-ten of the prospective voters who arrived at her station were required to cast a provisional ballot.

“In 2016 the only reason I remember people being asked to fill out a provisional ballot was due to their addresses being mismatched from what was in the voter book.  The number of provisional voters she saw in 2016 was “much less.”

As of November 6, the Delaware County website is showing the provisional ballot count of zero in Sue’s location, as well for the entire county.

“I saw one woman crying” said Sue, “she was saying ‘my vote doesn’t count.’ ”  The woman waited in line over an hour but when she checked in she found out someone pretending to be her had already shown up, signed her name and cast her ballot.

One recurring situation threw up a red flag in Sue’s mind – almost all the provisional ballot notices she received were ‘applied for absentee ballot, must vote provisionally.’

I began to wonder why so many people who were marked as receiving absentee ballots were showing up to vote in person.  There were a lot, and it was totally chaotic.

There were so many provisional ballots cast that the Radnor location ran out, according to Sue – twice.

A provisional ballot is used to record a vote when there are irregularities or questions about voter eligibility that must be resolved before the vote is counted.

According to Sue, at around 7:40 p.m. a sheriff arrived with a supply of empty provisional ballots. “But it was weird because no one was there – we were packed early and throughout the day but by the time he arrived there wasn’t anyone there to vote. One of the Democratic workers took the supply in back and I’m not sure what happened to them.”

However, Delaware County election officials responded quickly with an official statement to debunk the claim, saying the video was cropped (removing the fact that observers were looking on and approving the practice) and taken out of context.

Some ballots were damaged by the extractor during this process in such a way that the ballots could not be scanned successfully.”

The poll workers were re-completing ballots that were damaged and unable to be fed through the voting machines to be tabulated.

The extractor is the mechanism that takes the ballot out of the security sleeve.

The county also stated in their release that the Republican observers in the county approved of the process – which a fact check site reported to involve 1,634 ballots. 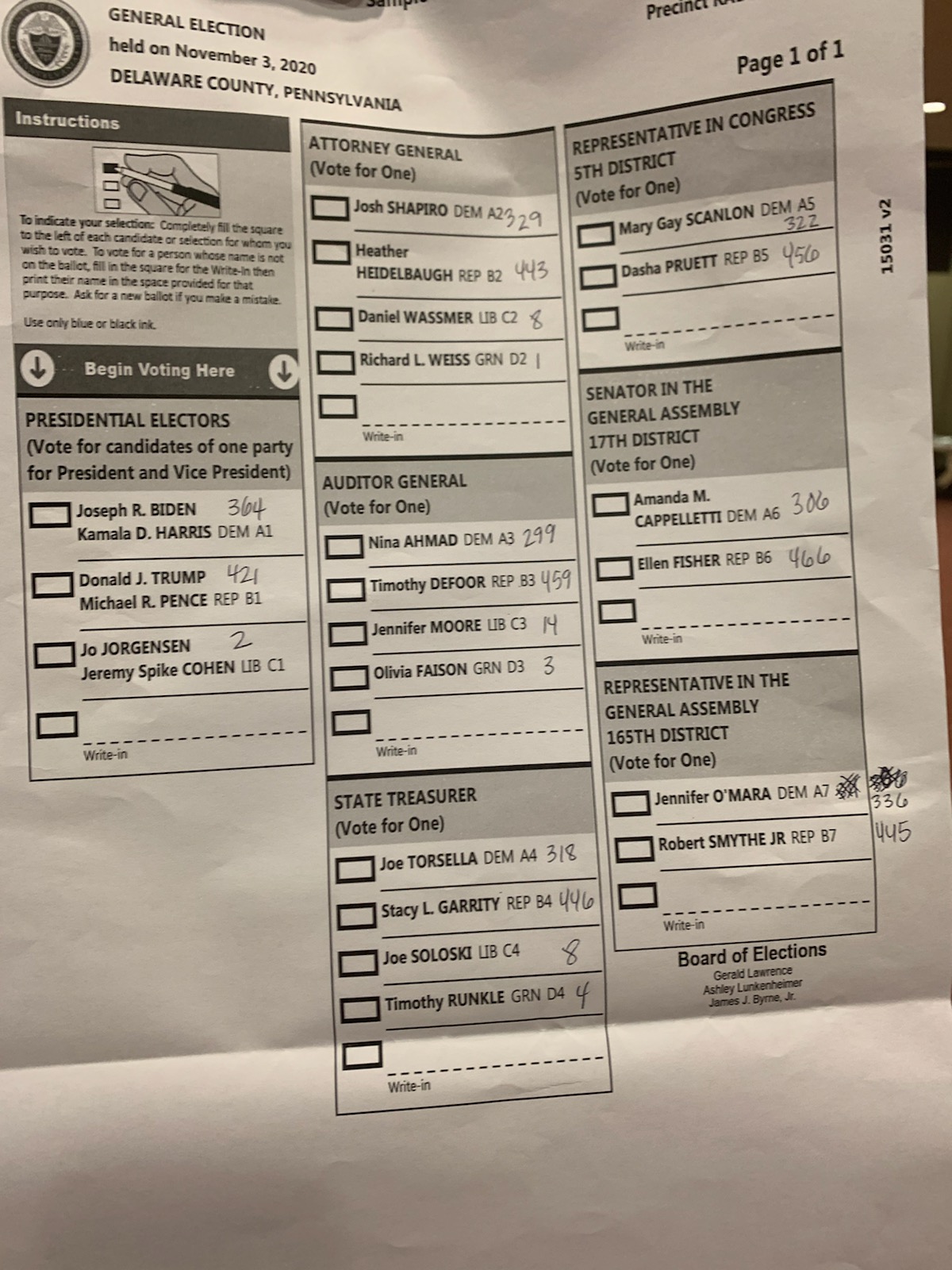 In addition to remaking damaged ballots,  poll workers were to begin on Tuesday canvassing mail-in and absentee ballots delivered before election day  – which put a glut on the system.  Canvassing, simply put, is the process of confirming valid ballots.

The Pennsylvania Supreme Court ruling referred to by Delaware County created “conditions that could lead to serious post-election problems” according to an opinion issued by the US Supreme Court (SCOTUS) on Friday night.  One of those problems is the chaos and delay caused by the ruling, but the bigger constitutional issue is that the state court overstepped authority – altering laws written and approved by the legislature, a possible violation of the Constitution’s separation of powers demand. In short, the court interprets laws, it does not write them.

SCOTUS issued the Order because guidance was being ignored throughout Pennsylvania – ballots received after polls closed on Tuesday were to be set aside from other ballots until further notice.

Any pre-canvassing or canvassing of mail-in and absentee ballots received after 8:00 p.m. on Tuesday and before 5:00 p.m. on Friday, November 6 also directly violates guidance handed down by Pennsylvania Secretary of State Kathy Boockvar, made mandatory by SCOTUS order.

Sue was also surprised to see the low number of votes tabulated between the time polls opened and closed– she received the totals shown in the picture (right) about 45 minutes after the polls closed.  The picture shows about 777 votes being cast.

Sue is hoping for a fair count and fair election – whoever wins. “Because voter fraud takes away your vote, your mom’s vote.” She continued “if three people walk in and lie and vote; or someone gets an absentee and voted and walked in and voted they are taking away your vote. It’s upsetting – your taking away a civil liberty.”

Jack Windsor is Managing Editor at both The Ohio Star and The Michigan Star. Windsor is also an Investigative Reporter at WMFD-TV and The Virginia Star. Follow Jack on Twitter. Email tips to [email protected].