RICHMOND, Virginia – The Virginia Senate on Monday adopted a number of slight changes to legislation and the budget recommended by Governor Ralph Northam, including language for the implementation of the recently-approved redistricting commission.

Overall, including the budget, the Senate passed amendments for ten bills from the House and Senate. Most passage votes were primarily along party lines with a couple amendments garnering unanimous support.

Many of Northam’s amendments were rather small and did not change what the bills actually accomplished or things like that. For example, amendments made to SB 5034, relating to creating a new system for earned sentence credits and the release of terminally ill inmates, simply changed the month of implementation.

For the budget legislation, HB 5005, there were ten amendments all together, but the Senate only considered seven of those proposed adjustments, two of which wound up being rejected by the body.

One such amendment that was rejected by the Senate would have removed language calling for residents and employees of nursing and assisted living facilities to receive priority COVID-19 testing to instead allow the Virginia Department of Health (VDH) to rely on their own testing and vaccination priorities, which did include the elderly population. 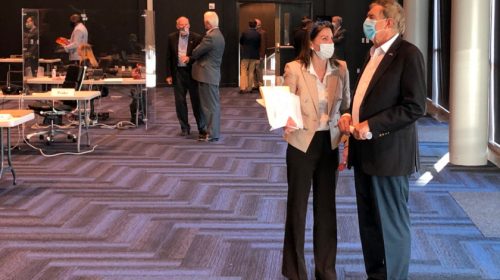 Several legislators spoke in opposition to the amendment, such as Senators Jennifer Kiggans (R-Virginia Beach) and David Marsden (D-Fairfax County), arguing that a large volume of COVID cases and deaths in the Commonwealth come from the more vulnerable elderly population.

Sen. Barbara Favola (D-Arlington) said the amendment should be adopted because it would give the VDH the flexibility to prioritize testing and, eventually, vaccines for people within evolving hotspots, instead of just one group of people.

The Governor’s recommendation was rejected by a vote of Y-12 N-27.

Another budget amendment considered by the body was the allocation of $1 million in fiscal year 2020-2021 to provide funding for an independent, third-party investigation of the culture, traditions, policies and practices of the Virginia Military Institute (VMI).

Senate Minority Leader Thomas Norment (R-James City) spoke in favor of the amendment, saying the school’s board of visitors welcomed the investigation and that “all of us from the VMI family are looking forward to” it.

The amendment was then passed almost along party lines (Y-23 N-16) with further debate.

“I think it’s a great amendment,” Lieutenant Governor Justin Fairfax (D) told The Virginia Star. “I think the governor setting aside $1 million to actually conduct this investigation, to get to the facts and to get to the bottom of everything is the right way to go.”

The tenth and final budget amendment, pertaining to compromised language for the implementation of the state redistricting commission, was almost passed unanimously (Y-39 N-2). 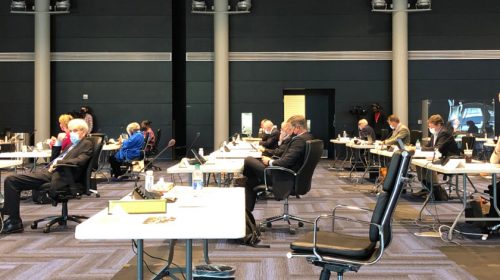 “I was very pleased that we were united with the [redistricting commission language],” Sen. Emmett Hanger (R-Augusta) said in an interview with The Star. “I’m just glad that we got, I think, a reasonable outcome.”

The redistricting language passed down by Northam included some information on the commission that has already been heavily reported, but it also included new details on the timing and other aspects.

Some of that new information includes: legislative commissioners must be selected by December 1st of this year, citizen members must be appointed by no later than January 15th, the commission’s citizen chairman must be picked by February 1st during a public meeting and the citizen application period will only be four weeks long starting from the beginning of December.

Additionally, in order for any district drawing plan, legislative or congressional, to officially be submitted to the General Assembly, the plan must receive affirmative votes of at least six of eight legislative members and six of eight citizen members.

Hanger also said two minor adjustments were made to the language after discussions took place early last week, both before and after the referendum was passed by voters, where members of the House of Delegates wanted Northam to make significant changes.

One change clarified that the Supreme Court of Virginia would appoint two masters to help the court establish districts if the commission fails to submit plans before the prescribed deadline or if the Assembly fails to adopt a plan before the deadline.

The other tweak ensured the Commonwealth’s racial, ethnic, geographic, and gender diversity are reflected during the implementation process and work of the redistricting commission.

The Senate and House approving or rejecting Northam’s amendments marked the official end to the extremely long 2020 special session, which began all the way back on August 18th.

Despite having to navigate each body working in separate locations through different means, the most frequent complaint among Senators was the 83-day length.

“The special session was extraordinarily too long, I mean it has been as long as a regular session,” Norment told The Star. “The logistics of dealing with it in a pandemic situation has been tortuous.”

“Jefferson put the country together quicker,” Saslaw said. “Had this crowd over here been in Philadelphia 230 years ago, we would still be singing god save the queen.”