MOUNT JULIET, Tennessee — Singer, songwriter, and actress Joy Villa told as many as 1,000 Tennesseans at a Trump rally Monday that incumbent President Donald Trump will take the oath of office, again, on January 20 of next year.

Villa said this at a gathering at Mount Juliet’s Charlie Daniels Park. Villa told Trump supporters not to worry about the mainstream media decreeing that former Vice President Joe Biden is now the president-elect.

Villa, who said she was once a liberal, recently relocated from Los Angeles to Middle Tennessee.

“I love my Democratic brothers and sisters. I have love for them. Let them celebrate. Let them dance in the streets. Let them riot. Because they are digging their own grave,” Villa told the crowd.

“Because come Inauguration Day we will see the truth. That President Trump will again be their president.”

Villa also said that “God is on our side” and advised the crowd to trust in God.

“We know he [Trump] was chosen for a time such as this. This could have been the main reason that he’s in office,” Villa said.

“To expose the voter fraud.” 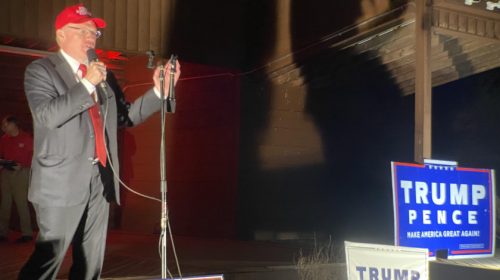 Meanwhile, U.S. Rep. John Rose (R-TN-06) reminded the crowd that big media, big tech, and Democratic politicians — all of whom have had a pivotal role in the 2020 election — have lied about Trump for years and lied about Trump colluding with Russia.

Rose also said that Tennessee Secretary of State Tre Hargett “knows how to count votes” and that Tennesseans expect officials in other states to count their votes accurately too.

“We need to stand by our president in the days to come to make sure that this election is decided based on legal votes,” Rose said.

Rose, though, said Trump supporters “have a long and hard fight ahead.”